K-Cup Inventor Admits He Doesn't Have a Keurig, Regrets Inventing Them ... Find Out Why 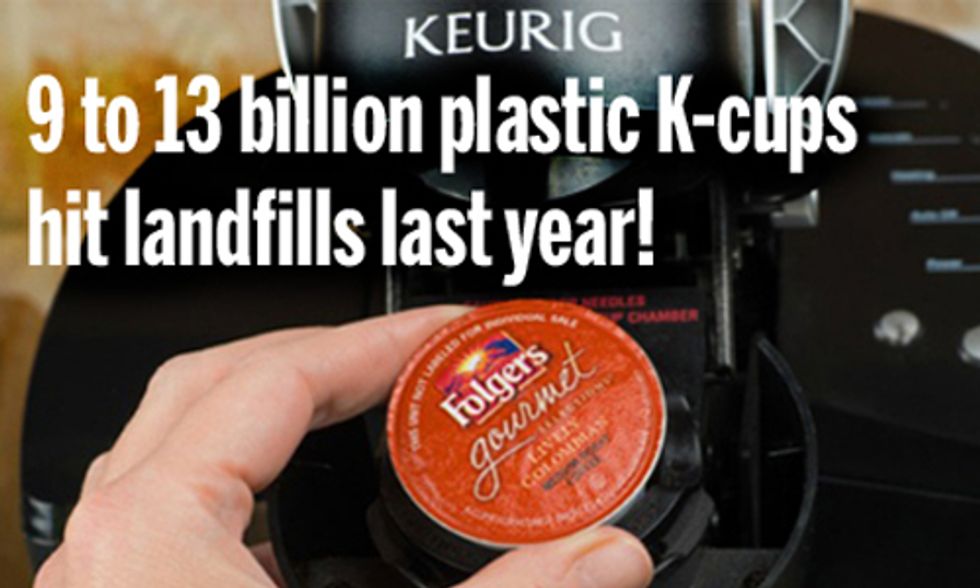 In a story released this week, Keurig K-cup inventor John Sylvan, who sold his shares of the company for $50,000 back in 1997, admits he regrets ever creating the disposable plastic coffee pods that built what is today a $4.7 billion business. With an estimated nine to 13 billion plastic K-cups hitting landfills last year, Sylvan admits, “I feel bad sometimes that I ever did it."

Pod-based coffee makers like Keurig, designed to create customizable single-serve coffees from plastic pods filled with coffee grounds, can be found in one-third of American households. That pervasiveness is generating a lot of leftover pods that end up in landfills.

Keurig was acquired by eco-friendly coffee producer Green Mountain in 2006, combining names in 2014. While every spin-off coffee pod product produced since the merger (including Vue, Bolt and K-Carafe cups) is recyclable, the company's biggest seller, the original K-cup product made from plastic #7, is not.

According to Keurig Green Mountain's Chief Sustainability Officer Monique Oxender, they're working on it. The company has committed to making all K-cups recyclable by 2020, but concerned citizens say it's not fast enough. A petition set up by the creators of the viral Kill the K-Cup video urges Keurig to expedite the development of their recycling program and has been signed by more than 20,000 people. According to Sylvan, it won't happen any time soon. “No matter what they say about recycling," he said, "those things will never be recyclable."

Supporters of pod-based coffee makers would argue that's not such a bad thing considering the machines require less electricity than traditional brew pots and extract coffee more efficiently from less grounds, saving on the resources required to produce the water-intensive crop.

Coffee is a staple in the American diet and won't be going away any time soon. It offers a slew of health benefits and, most importantly, the jolt of caffeine so many have come to rely on. So what's the most eco-friendly coffee brewing option? According to Murray Carpenter, author of Caffeinated, the answer is, unfortunately, instant coffee.

If abandoning the convenience of your single-serve Keurig for more sustainable instant coffee is out of the question, there are other options. Keurig Green Mountain's Grounds to Grow On program collects used pods turning the grounds into fertilizer and burning the cups for energy. Another company, Terracycle, sells zero-waste boxes where you can collect coffee pods to ship back for recycling.

As for Sylvan, he says he has a solution to Keurig's waste problem but that the company won't listen. As they embark on their own 2020 recycling initiative, he has started a new company Zonbak selling solar panels, in part to offset the negative environmental impact of his K-cup invention.