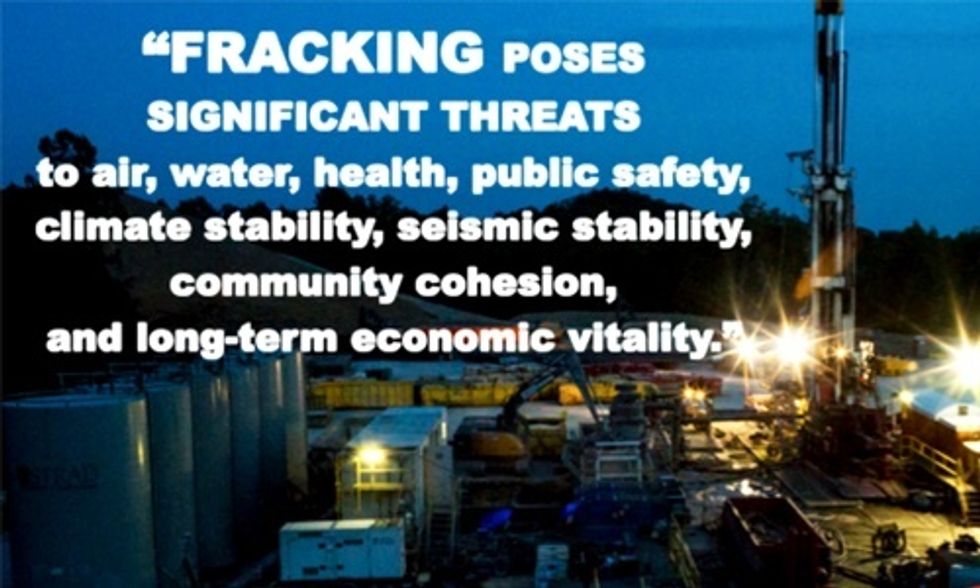 A partnership encompassing nationwide medical and public health experts and scientists released the third edition of the Compendium of Scientific, Medical and Media Findings Demonstrating Risks and Harms of Fracking. The compendium, the first two editions of which were important in highlighting the science in New York before the ban was announced, compiles and summarizes hundreds of peer-reviewed studies and other important findings on fracking. The emerging science, including more than 100 studies after New York’s ban was announced, further shows that Gov. Cuomo and his Administration were right to ban high volume fracking.

For the first time, the compendium includes a section on fracking infrastructure, examining the impact of pipelines and compressor stations on health and safety in New York. Physicians for Social Responsibility, a Nobel Peace Prize-winning organization of physicians, nurses and other public health professionals, joined with Concerned Health Professionals of New York to release the report nationally and send the new report to Gov. Cuomo and Health Commissioner Zucker, with a letter urging the state to put a hold on gas infrastructure expansion until and unless their safety can be demonstrated through comprehensive public health and environmental assessments.

Additionally, the organizations sent letters with the report to President Obama and the Surgeon General asking that they acknowledge the health risks and to call for a meeting. They also sent letters to the governors of Pennsylvania and Maryland, highlighting the significant health risks and calling for moratoria or ban on fracking.

The health groups’ letter to Gov. Cuomo and Commissioner Zucker likewise applauds them for their leadership in relying on solid scientific research and protecting the public health and safety of New Yorkers. In the face of numerous proposals to expand gas infrastructure in the state and emerging scientific evidence of impacts and risks from infrastructure, the health groups are calling for New York to use its power in the permitting process to put on hold and deny permits to expand gas infrastructure and for assessments of public health and environmental impacts to be undertaken. The letter notes that in many cases the federal government has approved permits without adequate consideration of critical issues and impacts.

The letter states, “We strongly urge New York State to put on hold and deny any expansion of natural gas transmission and storage projects, until and unless their safety can be demonstrated through comprehensive public health and environmental assessments.”

The letter notes the range of proposed projects and potential impacts, “What we already know about the public health and climate risks of fracking infrastructure is troubling. What we don’t know is all the more alarming. As New York is faced with numerous proposed new and additional gas pipelines, compressor stations, storage facilities and a major liquefied natural gas terminal, we believe it is crucial to examine both the individual risks these projects pose and to consider their cumulative impacts, including to the state’s climate and energy goals.”

The section of the compendium on drilling and fracking infrastructure compiles the science evidence available, which includes evidence of alarming risks. For example, compressor stations and pipelines are both major sources of air pollutants, including benzene and formaldehyde, which create serious health risks for those living nearby.

As the letter says, in their review of fracking, New York's Department of Health (DOH) and Department of Environmental Conservation (DEC) rightly noted the potential for harmful air impacts, environmental impacts and other risks from infrastructure. (DOH Health Review p. 5 and Findings Statement p. 27) Given the risks, this year the Medical Society of the State of New York and the American Medical Association each specifically called for comprehensive health impact assessments regarding the health risks associated with fracking infrastructure, including natural gas pipelines and compressor stations.

The letter also notes that infrastructure poses climate impacts, which are counterproductive to the state's climate and greenhouse gas emissions goals. New York concluded (DEC Findings Statement, p. 18) that natural gas contributes to climate not only directly but also by furthering availability and consumption of fossil fuel, which “has the potential to undermine the deployment of various types of renewable energy and energy efficiencies, thereby suppressing investment in and use of these clean energy technologies.”

Kathy Nolan, MD, MSL, of Concerned Health Professionals of New York and Physicians for Social Responsibility—New York, said, “Gov. Cuomo and his Administration showed great wisdom and courage in listening to the science and ultimately prohibiting high volume fracking in order to protect public health. Similar to fracking, numerous gas infrastructure proposals pose risks of harm to public health, air pollution and exacerbating climate change. For the wellbeing of all New Yorkers, Gov. Cuomo should put on hold and deny gas infrastructure expansion proposals until and unless their safety can be demonstrated through comprehensive public health and environmental assessments.”