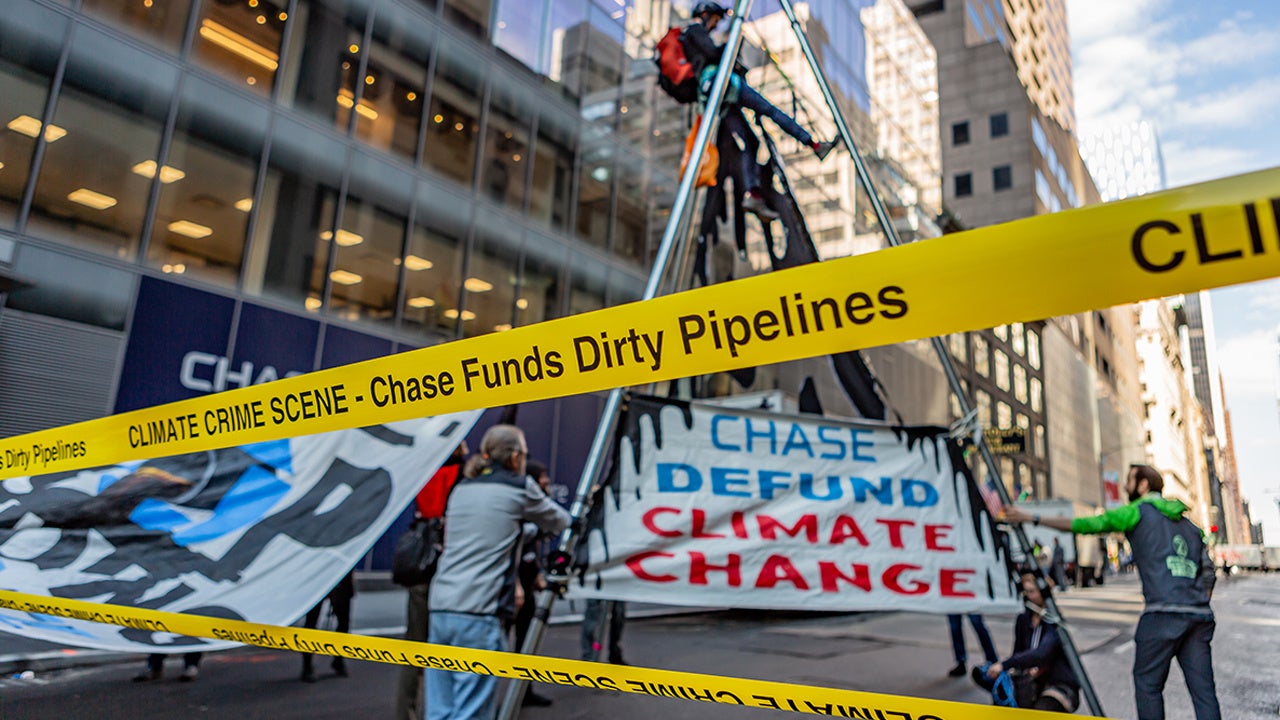 Climate activists protest Chase Bank's continued funding of the fossil fuel industry on May 16, 2019 by setting up a tripod-blockade in midtown Manhattan, clogging traffic for over an hour. Michael Nigro / Pacific Press / LightRocket / Getty Images

Climate campaigners on Friday expressed hope that policymakers who are stalling on taking decisive climate action would reconsider their stance in light of new warnings from an unlikely source: two economists at J.P. Morgan Chase.

Extinction Rebellion spokesperson Rupert Read revealed Thursday that he had obtained a report, entitled “Risky Business: Climate and the Macroeconomy,” by J.P. Morgan economists David Mackie and Jessica Murray. The report issued warnings to bank clients similar to those promoted by climate action groups — describing extreme weather events and global conditions that could result from the continued extraction of fossil fuels.

In doing so, the economists implicated the bank’s own investment activities in the potentially catastrophic effects of the climate crisis.

J.P. Morgan is the world’s largest financial backer of fossil fuel companies, helping to fund fracking, pipeline projects, and Arctic oil and gas exploration. The company has contributed billion to such projects since the Paris climate agreement was forged in 2015. The agreement called on governments to reduce fossil fuel emissions to help limit global heating to 1.5° Celsius above pre-industrial temperatures.

If activities like the ones funded by J.P. Morgan continue to release fossil fuels into the atmosphere, Murray and Mackie wrote, “We cannot rule out catastrophic outcomes where human life as we know it is threatened.”

Failing to move away from global systems that scientists agree are causing the planet to warm “would likely push the Earth to a place that we haven’t seen for many millions of years,” they added.

On Twitter, Read pointed out the incongruity of such “radical truth-telling” coming from J.P. Morgan.

P.1 of new report on ‘Risky business: climate and the macroeconomy’: “We cannot rule out catastrophic outcomes where human life as we know it is threatened."
Who do you think wrote this new exercise in radical truth-telling?: XR? UEA? WWF?
The correct answer is: J.P.Morgan!!
>RT<

Others highlighted the report as one that might catch the attention of others in the financial services industry and people who believe bold climate action is a cause embraced by a minority of extremists.

All those folks harassing @GretaThunberg and other climate activists over their age should read what JP Morgan found in their own research. https://t.co/rErpyoqnk3

“Hardly a bank you could call communist now, is it?” tweeted journalist Dom Phillips.

Citing reports by the International Monetary Fund (IMF) and the Intergovernmental Panel on Climate Change (IPCC), the authors note that with the status quo kept in place, the planet is expected to reach a temperature 3.5° above pre-industrial levels.

In addition to major impacts on the world economy, the authors wrote, the climate crisis will affect human health, water supplies, and migration.

The report comes just weeks after CNBC host Jim Cramer announced fossil fuel investments are “in the death knell phase” and that “the world’s turned on” the industry as it did on tobacco as understanding grew about the risks of smoking.

“It is clear that the Earth is on an unsustainable trajectory,” reads the report. “Something will have to change at some point if the human race is going to survive.”

The authors advocated for a global carbon tax but said, “This is not going to happen anytime soon” and called the continued investment in climate-warming fossil fuels a global problem with “no global solution … in sight.”

Bill McKibben, co-founder of 350.org, suggested that as one solution, the economists “might want to talk with the Chase bankers who are guaranteeing [climate catastrophe] will happen by lending oil companies endless cash.”

The JPMorganChase economists who are privately warning their high-end clients about the economic catastrophe of climate change…might want to talk with the @Chase bankers who are guaranteeing it will happen by lending oil companies endless cash https://t.co/QqyJxvEVwA

Activist Becky Brunton said the report offers the latest evidence that those with the power to stop supporting fossil fuel projects are fully aware of the damage their investments are doing to the planet.

“They know. They ALL know,” tweeted Brunton. “But the now (profits) outweighs the future (earth).”