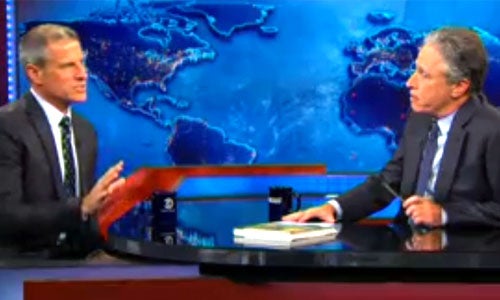 Jon Stewart interviewed Gene Baur, president and co-founder of Farm Sanctuary, on The Daily Show last night to discuss his new book, Living the Farm Sanctuary Life: The Ultimate Guide to Eating Mindfully, Living Longer and Feeling Better Every Day. Baur‘s organization protects farm animals from the cruelty of factory farming by placing them in farm sanctuaries, where they can live out the rest of their days.

Stewart, who personally owns some pigs, points out, “It’s harder to eat meat when you know the animal’s name.” But Stewart lays out the dilemma many face: “On the one side, eating mindfully and vegan seems to be the solution to nutrition, to health, to global warming. On the other side, corned beef.” Stewart says he’s open to meat alternatives, but he would miss having an old Jewish guy yelling at him while he eats his corned beef.

Baur says not only can we change these habits, we must. “The Dietary Council just released on the heels of this book, that this vegan lifestyle is sort of the solution to so many of the issues that are going on in the world,” Stewart says.

Baur enumerates the many benefits of making the switch: “We could save 70 percent on health care costs if we switched to a whole foods, plant-based diet in this country, we could save so much on resources—water, for example, half of the water used in this country is used to raise animals for food—and animal agriculture contributes more to climate change than the entire transportation industry,” says Baur.

If You’ve Ever Wanted to Live in a Treehouse, You’ve Got to Check This Out

How Esther the Wonder Pig Inspired Me to Go Vegan