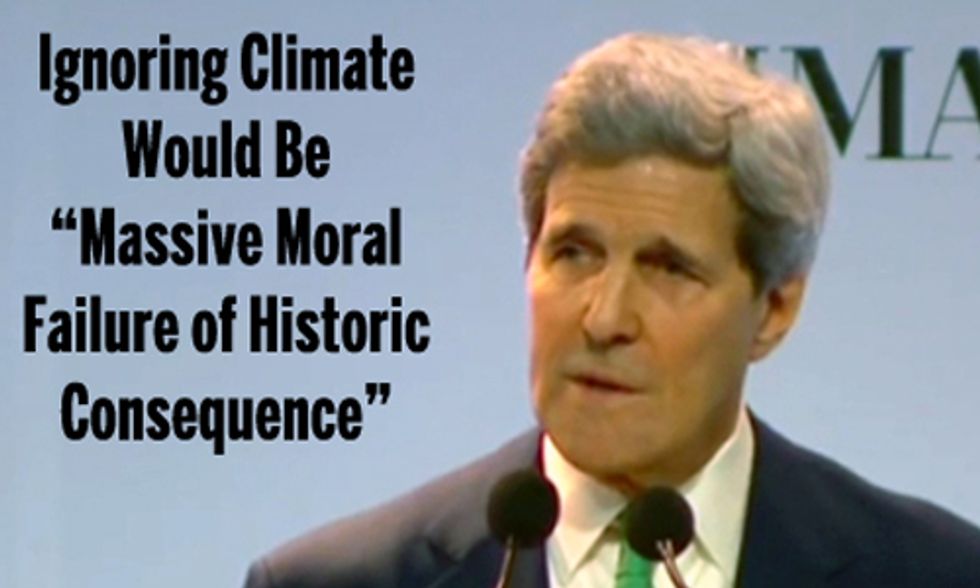 U.S. Secretary of State John Kerry made a quick trip to Peru Thursday to address the UN climate talks in Lima. Known as a passionate advocate for the climate both as secretary of state and during his time in the Senate, Kerry forcefully called out climate deniers and said that their path leads to "catastrophe," while calling on every nation, every leader and every person to do their part to address climate change.

He called climate change "not just another policy issue" but a global threat equal to terrorism, extremism, epidemics, poverty and nuclear proliferation  and contrasted "the amazing amount of evidence that has been tallied up [supporting global warming] versus the paucity of a few usually industry-paid-for false analyses that try to suggest otherwise."

Praising the work of his former Senate colleague Al Gore, who spoke earlier in the day and was sitting in the front row during the speech, Kerry recalled when they held the first hearing on climate change in the Senate—in 1988. He emphasized how much more essential taking action is now "at this moment there still is a window—but the window is closing quickly."

"I’m privileged to be here as President Obama’s lead international advocate that this issue should be personal for absolutely everybody—man, woman, child, businessperson, student, grandparent," said Kerry. "Wherever we live, whatever our calling, whatever our personal background might be, this issue affects every human on the planet, and if any challenge requires global cooperation and effective diplomacy, this is it."

"Rest assured, if we fail, future generations will not and should not forgive those who ignore this moment, no matter their reasoning," he said. "Future generations will judge our effort not just as a policy failure, but as a massive, collective moral failure of historic consequence, particularly if we’re just bogged down in abstract debates. They will want to know how we together could possibly have been so blind, so ideological, so dysfunctional and frankly so stubborn that we failed to act on knowledge that was confirmed by so many scientists in so many studies over such a long period of time and documented by so much evidence."

Kerry reiterated the familiar markers of climate change—droughts, rainstorms, typhoons, heat waves—and said, "You don’t need a Ph.D. to be able to see for yourself that the world is already changing. You just need to pay attention." He pointed to the solution: an energy policy that all nations big and small, wealthy and poor commit to."

#Climatechange transcends borders; every nation must approach it with the urgency it warrants. http://t.co/4JVhRqyl3S pic.twitter.com/7fMsKf2lzH

He said that the biggest emitters, including the U.S. China and the UK, have a major role to play in cutting their emissions and he ran down some of the ways the Obama administration is doing its part.

"But ultimately," he said, "every nation on Earth has to apply current science and make state-of-the-art energy choices if we’re going to have any hope of leaving our future to the next generation to the safe and healthy planet that they deserve. No single country, not even the United States, can solve this problem or foot this bill alone."

He wrapped up by addressing the economic impacts of fossil fuels vs. clean energy policies, saying that while coal and oil may be cheap in the short run, the costs in the long run from such climate change impacts as food insecurity, cleaning up after weather-related disasters and health issues will be far more expensive in the long run.

"Bottom line, in economic terms, this is not a choice between bad and worse, not at all," he said. "This is a choice between growing or shrinking your economy. Climate change presents one of the greatest economic opportunities of all time on earth. The global energy market of the future is poised to be the largest market the world has ever known. Between now and 2035, investment in the energy sector is expected to reach nearly $17 trillion. Imagine the opportunities for clean energy innovation. Imagine the businesses that could be launched, the jobs that’d be created, in every corner of the globe. The technology is out there. None of this is beyond our capacity. And the question—and it really is still open to question—is whether or not it’s beyond our collective resolve."

He got one more shot at the climate deniers before he wrapped up. He said, "Ask yourself, if all the people who’ve been putting the science out there for years are wrong about this and we make these choices to do the things I’m talking about, what’s the worst thing that can happen to us for making these choices? Create a whole lot of new jobs. Kick our economies into gear. Have healthier people, reduce the cost of healthcare. Live up to our environmental responsibilities. Have a world that’s more secure because we have energy that isn’t dependent on one part of the world or another."

"But what happens if the climate skeptics are wrong? Catastrophe."

#ClimateChange is personal to me, but I’m here today in #Lima because it should be personal for everybody.

“Secretary Kerry delivered a powerful message at Lima: by this time next year, countries need to deliver a global climate agreement," she said. "Without strong and coordinated global action, the risks of climate change are far too great. Thankfully, the dynamics around international climate action have shifted. The landmark U.S.-China joint announcements bolstered international ambition, while new standards for power plants set the stage for the United States to reach its new emission reduction target. Secretary Kerry, a longtime climate champion, has shown that the U.S. will not back down from its global obligation to respond to the climate crisis."

"The world is waking up to the fact that action on climate change can deliver economic benefits," she said. "Smart climate policies will drive innovation and new technologies, open new markets, and create lasting economic growth. It will bring new opportunities for developed and developing countries alike.”

"We are happy that Secretary Kerry has come to Lima, delivering a powerful call for unity on climate action today, and we hope his time here moves the process toward a strong climate treaty in Paris next year," he said. "We appreciate his comments on the urgency of creating a clean energy economy, noting in his speech that 'the only question is are we going to do it fast enough to make a difference."

"His record as a climate champion, however, contrasts with many of the U.S. positions in the Lima COP negotiations," he added. "President Obama's team continues to insist that presidential authority is insufficient to sign onto legally binding obligations to reduce climate pollution. At the same time, they claim that making pollution targets binding will reduce ambition. Neither is correct. Rather than portray U.S. presidential legal powers as weak in the face of a politically stunted, soon-to-be climate denier controlled Congress, Secretary Kerry should ask his boss to use every tool he can to fight the climate catastrophe we are facing.”

John Kerry: Climate Change Most Serious Threat We Face on the Planet