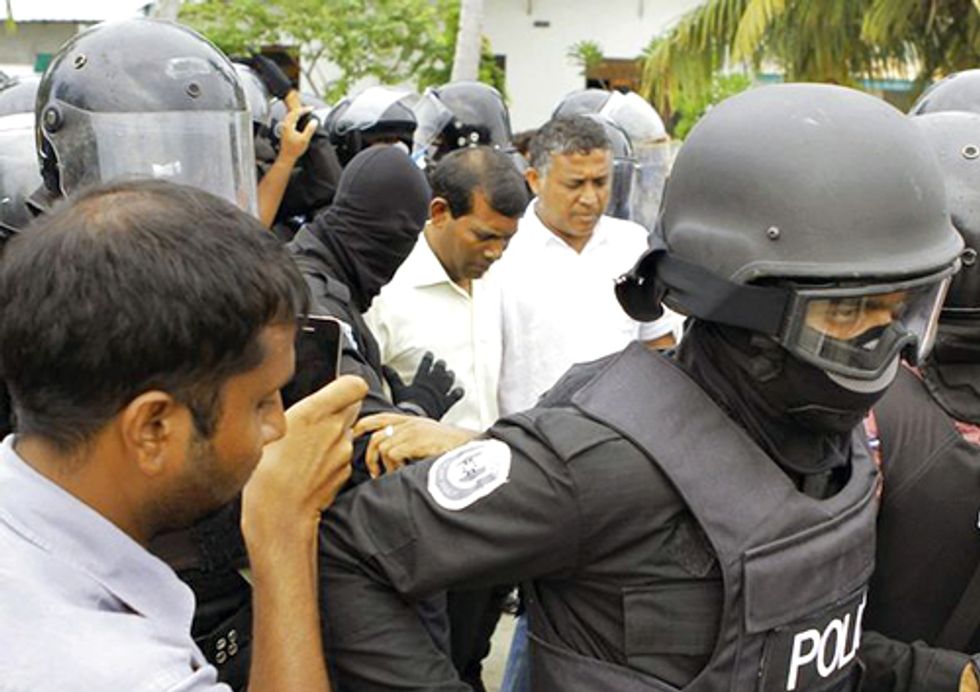 Former president of Maldives, Mohamed Nasheed, center, after being detained by Maldivian police in Fares-Maathodaa island, Maldives on Oct. 8.

Mohamed Nasheed, the first democratically elected President of the Maldives, who was ousted from office in February, was arrested today and taken into custody. In a brutal display of force, Nasheed was taken away Monday morning  by Maldivian National Defence Forces (MNDF), to stand trial for the “unlawful” arrest of a judge during his last days in power. Black clad MNDF Police arrested Nasheed, preventing him to continue his campaign to regain the presidency.

The New York Times reported Maldivian Democratic Party workers said that former ministers and aides in Nasheed’s government who were in the house were also pepper-sprayed and violently dragged out.

Speaking to The Hindu from the southern island of Fares-Maathoda, Hamid Abdul Ghafoor, Maldivian Democratic Party (MDP) spokesperson for international affairs, said that masked personnel of the MNDF descended on the island early on Monday morning, and arrested the former president. “They just dragged him away to their mother boat. They came in about five boats to the island,” he said.

Nasheed's Maldivian Democratic Party (MDP) urges the international community, and Maldivian development partners to immediately engage in dialogue with President Waheed Hassan to maintain “maximum restraint” and to not do anything that would disrupt peace and stability of the country.

Nasheed was swept to power in a bloodless revolution of the people in 2008 overthrowing by democratic election, the brutal dictator, Mamoon Abdul Gayoom who ruled with an iron fist for 30 years. Nasheed is to some extent a “Mandela of the Maldives." Like his South African counterpart, Nasheed was tortured and imprisoned on and off over a period of many years.

South of India, the approximate 1,200 Maldive Islands with a land area of only 115 square miles are spread out over 34,749 square miles of ocean. Some of the islands are at sea level and the highest point in the entire nation is a mere 7.87 feet above sea level. Former dictator Gayoom, in autocratic fashion, while ignoring freedoms for his own people, also refused to acknowledge that the country was being lost to the sea, much like the Kiribati Islands, because of rising sea levels due to global warming. Optimistically, things started to change for the better in 2008 when the environmentally aware, charismatic Mohamed Nasheed, who had been a leading advocate for democracy in his country, won the presidency as seen in the documentary The Island President.

It is urgent that the EcoWatch community show their support for Nasheed who has put his life on the line to bring democracy to the Maldives and who has been an international leader in encouraging nations all around the world to cooperate and address climate change. Visit Democracy Maldives for the latest news on Nasheed.

Watch the video below of the interview I did with Jon Shenk, director and cinematographer of the extraordinary film The Island President. The documentary dramatically captures the year in the life of President Mohamed Nasheed, after he becomes the first democratically elected President of the Maldives. Jon talks about climate change and why what happens in the remote island nation of the Maldives affects us all.