In a stunning victory for the whales, the International Court of Justice (ICJ) in The Hague announced their binding decision today in the landmark case of Australia v. Japan, ruling that Japan’s JARPA II whaling program in the Antarctic is not for scientific purposes and ordering that all permits given under JARPA II be revoked. The news was applauded and celebrated by Sea Shepherd Conservation Society USA and Sea Shepherd Australia, both of which have directly intervened against Japanese whalers in the Southern Ocean. 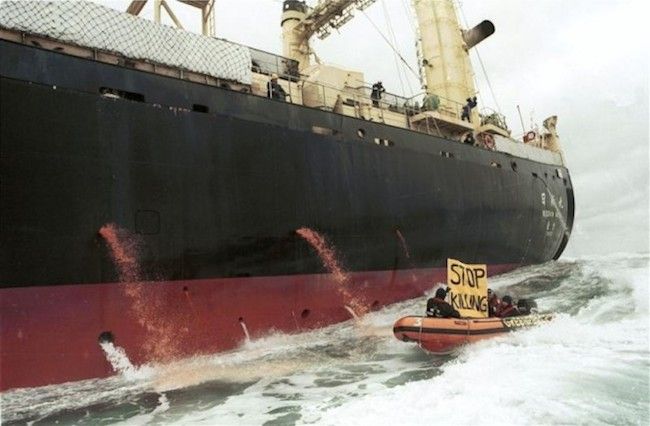 Greenpeace International is another organization that has been campaigning against whaling for more than 30 years. In this 1992 photo Greenpeace protested against the factory ship Nisshin Maru in the Southern Ocean. © Greenpeace / Robin Culley

The case against Japan was heard by the ICJ in July of last year to decide whether Japan is in breach of its international obligations in implementing the JARPA II “research” program in the Southern Ocean, and to demand that Japan cease implementation of JARPA II and revoke any related permits until Japan can make assurances that their operations conform with international law. 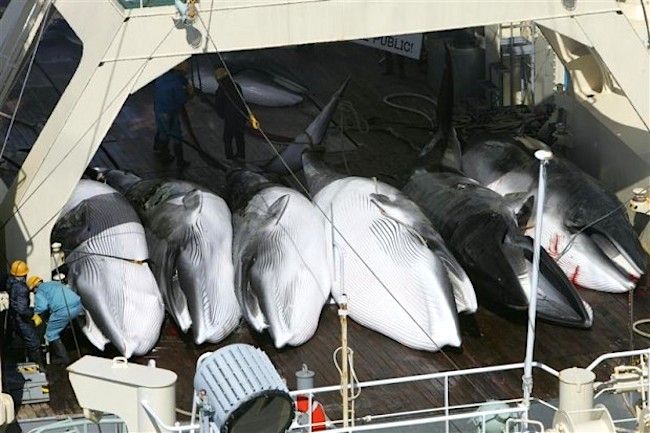 Greenpeace witnesses the killing of whales in the Southern Ocean by the Yushin Maru and the Kyo Maru No.1 ships of the Japanese whaling fleet, and the transfer of the whales to the Nisshin Maru factory ship in 2005. © Greenpeace / Jeremy Sutton-Hibbert

Prior to the verdict, there had been some speculation that the ICJ would not permit the hunting of endangered fin and humpback whales, but it would compromise and allow the hunting of minke whales. However, it has been Sea Shepherd’s contention all along that—no matter the species—no whales should be killed, especially in a sanctuary. Sanctuary means “a place of refuge or safety; a nature reserve” where animals are protected. To allow killing in an internationally designated sanctuary is to make a mockery of international agreements made by those countries who established the sanctuary in 1994. At that time, 23 countries supported the agreement and Japan was the only International Whaling Commission (IWC) member to oppose it.

Even the Ambassador from Japan to the U.S., Kenichiro Sasae, during a public meeting in Los Angeles in Dec. 2013 attended by representatives of Sea Shepherd USA, had this to say about whales and whaling: “As an individual, I like whales and if you go out and see the whales, there is no reason for us to kill this lovely animal. But it’s history and it’s politics, I would say. There are a small number of Japanese people still trying to get this won. But mainstream Japanese are not eating whale anymore.” At the same meeting, Ambassador Sasae stated that Japan will abide by the ICJ ruling. 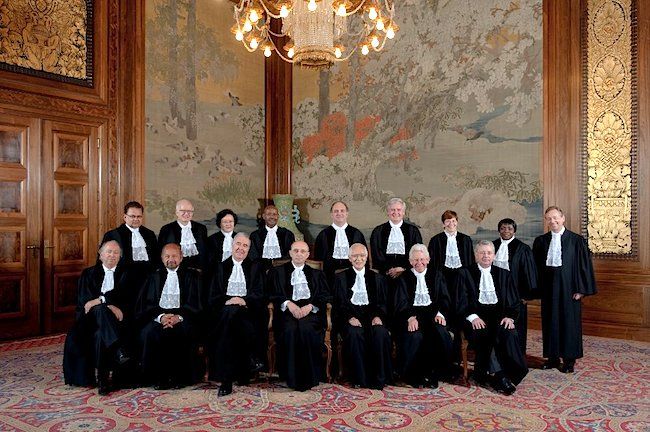 Members of the International Court of Justice. Photo credit: ICJ

“With today’s ruling, the ICJ has taken a fair and just stance on the right side of history by protecting the whales of the Southern Ocean Whale Sanctuary and the vital marine ecosystem of Antarctica, a decision that impacts the international community and future generations,” said Captain Alex Cornelissen of Sea Shepherd Global.

Sea Shepherd Conservation Society’s international volunteer crew stood on the frontlines in the hostile and remote waters of Antarctica for eight years and then Sea Shepherd Australia took up that gauntlet for the last two years and will keep confronting Japanese whalers in Antarctica until we can once and for all bring an end to the killing in this internationally designated “safety zone” for whales.

Over the years, Sea Shepherd has been the only organization to directly intervene against Japan’s illegal commercial whaling conducted under the guise of research, with their claims of research globally questioned. Indeed, Sea Shepherd has been the only thing standing between majestic whales and the whalers’ harpoons, as these internationally protected species—many of them pregnant—migrate through Antarctic waters each year.

“Though Japan’s unrelenting harpoons have continued to drive many species of whales toward extinction, Sea Shepherd is hopeful that in the wake of the ICJ’s ruling, it is whaling that will be driven into the pages of the history books,” Cornelissen said. 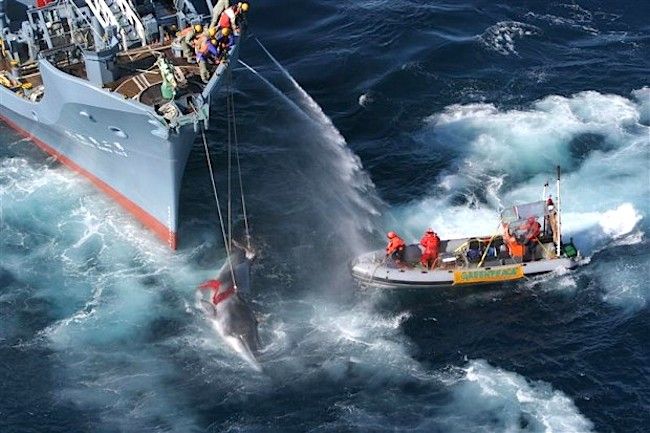 Greenpeace ship MY Esperanza tries to hinder the shooting and eventual transfer of a minke whale by the Yushin Maru No.2 catcher ship in 2005. © Greenpeace / Kate Davison

“Despite the moratorium on commercial whaling, Japan has continued to claim the lives of thousands of the gentle giants of the sea in a place that should be their safe haven,” said Sea Shepherd Founder, Captain Paul Watson. “Sea Shepherd and I, along with millions of concerned people around the world, certainly hope that Japan will honor this ruling by the international court and leave the whales in peace.”

Sea Shepherd Global will have the ships prepared to return to the Southern Ocean in Dec. 2014 should Japan choose to ignore this ruling. If the Japanese whaling fleet returns, Sea Shepherd crew will be there to uphold this ruling against the pirate whalers of Japan.