Interactive Map Shows When Your Community Could Reach 'Climate Departure' 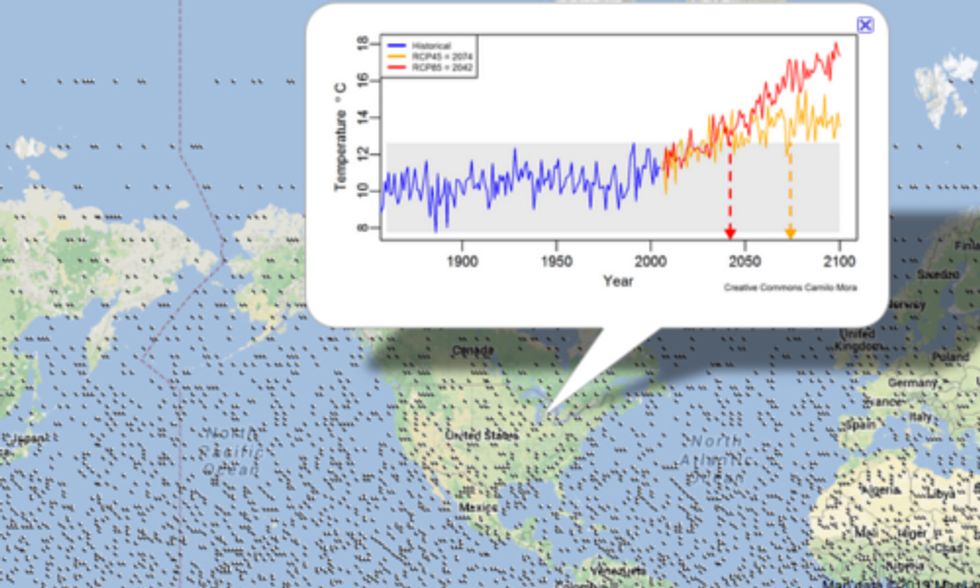 A new study published in the journal Nature predicts that within a few generations humans will live in an “entirely new climate” unless greenhouse gas emissions are held to current levels.

After the year 2047, the average temperatures in each year will be hotter across most parts of the planet than they had been at those locations in any year between 1860 and 2005, say the researchers from the University of Hawaii. In a given geographic area, “the coldest year in the future will be warmer than the hottest year in the past,” Dr. Camilo Mora, a University of Hawaii professor and the study's lead author, told the New York Times.

The study's authors call this new metric climate departure—the year when temperatures at any specific spot on Earth will shift permanently to a point outside their historic bounds.

“The results shocked us: regardless of the scenario, changes will be coming soon,” Mora said. “Within my generation, whatever climate we were used to will be a thing of the past.”

Visit this interactive map to see when your community's point of departure could be.

Tropical locations will feel the effects of this shift first. This will happen, researchers say, because of “small but rapid changes” that tropical ecosystems and species aren’t used to. The tropics, which are home to the world’s areas of greatest biodiversity, are highly sensitive to environmental changes.

The research is based on climate models, huge computer programs that attempt to reproduce the physics of the climate system and forecast the future response to greenhouse gases. Though they are the best tools available, these models contain acknowledged problems, and no one is sure how accurate they will prove to be at peering many decades ahead.

Researchers studied two scenarios. The first assumed worldwide “business as usual” regarding greenhouse gas emissions. The second, more optimistic, scenario assumed we will find a way to stabilize emissions at current levels. But even if we’re able to achieve stabilization, the climate shift will only be delayed by perhaps 20 more years.

Analyzing temperatures recorded from 1860 to 2005, researchers used 39 independently developed climate models from 12 different countries and looked at temperature projections for the next 100 years. This combination of information enabled them to forecast the year when temperatures at any specific spot on earth will shift permanently to a point outside their historic bounds.

The world’s oceans already passed their climate departure point in 2008, the study says.

“These results should not be reason to give up,” Mora said. “Rather, they should encourage us to reduce emissions and slow the rate of climate change. This can buy time for species, ecosystems and ourselves to adapt to the coming changes.”