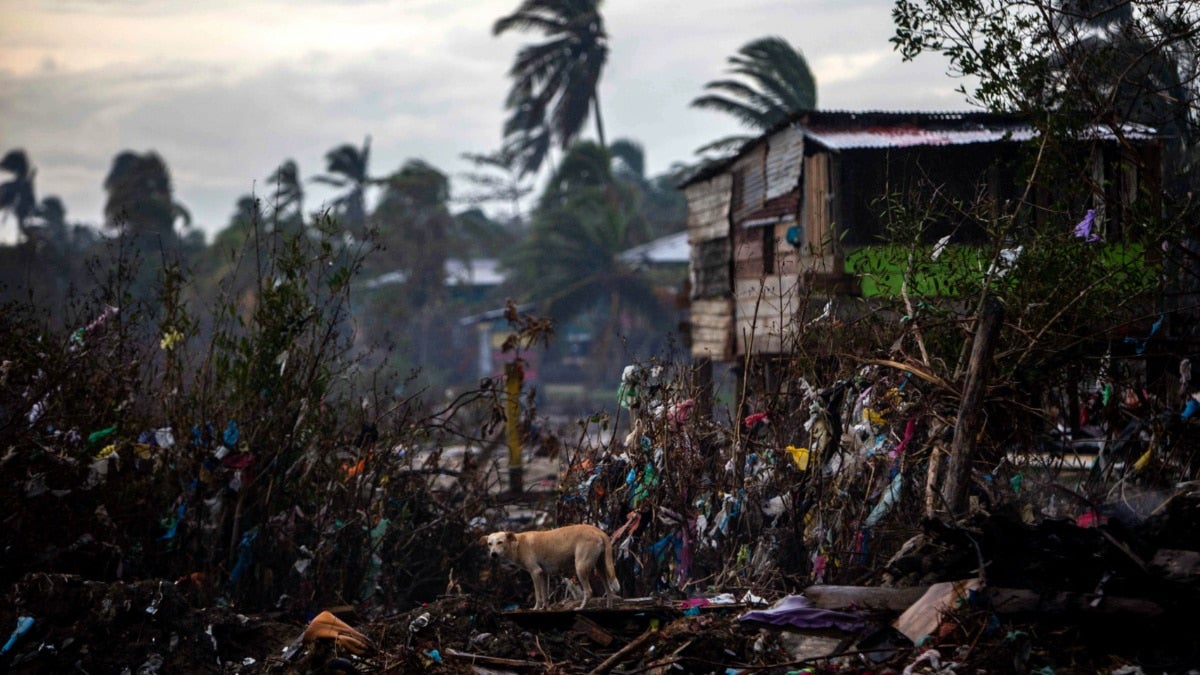 A dog is seen amongst rubble left behind from Hurricane Eta, in Bilwi, Puerto Cabezas, Nicaragua, on November 15, 2020, before the arrival of Hurricane Iota. STR / AFP / Getty Images

Hurricane Iota made landfall along the coast of northeastern Nicaragua at 10:40 p.m. Monday night as an “extremely dangerous” Category 4 storm.

The landfall location was just 15 miles away from where the devastating Hurricane Eta made landfall 13 days earlier, according to the National Hurricane Center (NHC). It was also the most powerful storm to make landfall in Nicaragua in November, Colorado State University meteorologist Philip Klotzbach noted on Twitter, breaking the record set by Eta.

“This is double destruction,” Nicaraguan Business owner Adán Artola Schultz told The Associated Press. “This is coming in with fury.”

Artola Schultz lives in Puerto Cabezas, or Bilwi, a Nicaraguan city about 30 miles from where the storm made landfall. He said he watched the wind tear a metal roof off of a two-story home.

“This hurricane is definitely worse” than Eta, Bermúdez told The Associated Press. “There are already a lot of houses that lost their roofs, fences and fruit trees that got knocked down. We will never forget this year.”

Before it even made landfall, the storm blew a metal roof off of a hospital in Bilwi where victims of Hurricane Eta were being treated, The New York Times reported. Most of the city has been without power since 3 p.m. Monday.

Iota is the 30th named storm of the record-breaking 2020 Atlantic hurricane season, the most of any season. It is also the ninth storm this season to rapidly intensify, a phenomenon linked to the climate crisis, The Associated Press reported.

Iota strengthened into a Category 5 hurricane but weakened before coming ashore. It was the latest Category 5 storm on record, Klotzbach said.

While it was still a Category 5 storm, Iota lashed the Columbian islands of San Andres and Providencia, CNN reported.

“It’s the first time that a Category 5 Hurricane has reached our territory since records began,” Colombia President Ivan Duque told reporters. “We are facing an issue with characteristics never before witnessed by our country.”

At least one person died on Providencia and 90 percent of the island’s infrastructure has been impacted. Both islands also lost electricity, The New York Times reported. The Colombian city of Cartagena also experienced flooding.

Iota has now weakened into a tropical storm with winds reaching 75 miles per hour, according to a 9 a.m. update from the NHC. It is currently located about 85 miles west of Bilwi and heading further inland across northern Nicaragua today and over southern Honduras tonight.

The storm is still forecast to inundate the region with a dangerous amount of rain; 10 to 20 inches is projected over northern Nicaragua, Honduras, southeast and central Guatemala and southern Belize. Some places could see up to 30 inches of rain. That rain could produce life-threatening flooding, made worse by ground that is still wet from Hurricane Eta.

“Flooding and mudslides across portions of Honduras, Nicaragua and Guatemala could be exacerbated by Hurricane Eta’s recent effects there, resulting in significant to potentially catastrophic impacts,” the NHC warned.

Hurricane Iota is expected to dissipate over Central America in the next 48 hours.