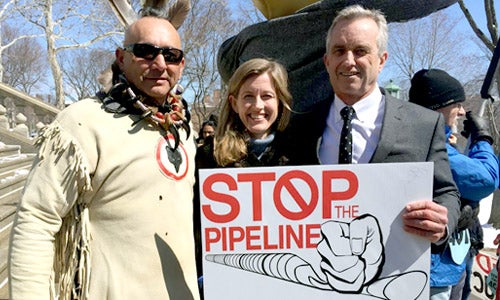 Nearly 400 people from across the state of New York and beyond rallied in Albany today asking Gov. Cuomo to stand up to the Federal Energy Regulatory Commission (FERC) and use the state’s authority under the Clean Water Act to deny the 401 water quality certificate for the Constitution Pipeline. 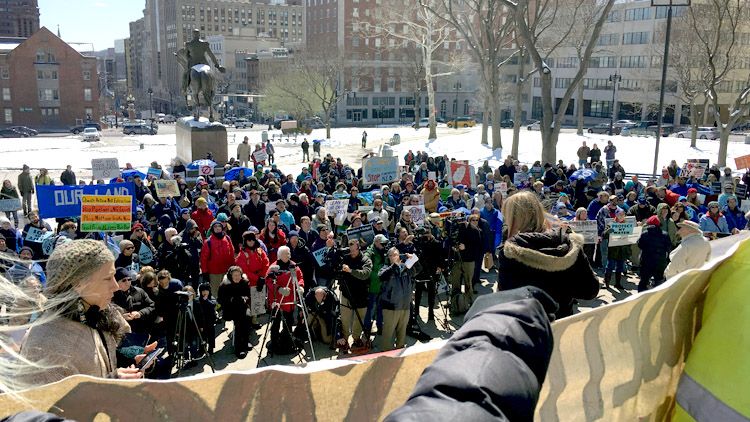 Nearly 400 people from across the state of New York rallied in Albany today asking Gov. Cuomo to stand up to the Federal Energy Regulatory Commission. Photo credit: Marc Yaggi

The Constitution Pipeline, a joint venture between Williams Pipeline Companies and Cabot Oil & Gas, would run approximately 124 miles from Susquehanna County, Pennsylvania to Schoharie County, New York. The pipeline would be 30 inches in diameter, and transport natural gas—the equivalent of 4.68 million gallons of oil per day—from the Marcellus Shale in Pennsylvania to New York state.

The rally was organized by Stop the Pipeline, with the support of 60 participating organizations. The event included speeches from prominent environmentalists, including Waterkeeper Alliance president Robert F. Kennedy, Jr., and a march from the capitol to the headquarters of the New York Department of Environmental Conservation. People whose land has already been taken by eminent domain for the construction of the pipeline led the march, followed by “the spirit of the Susquehanna,” symbolizing the water that nourishes all life.

“FERC is a rogue agency that is captured by the very industry it is supposed to regulate,” Kennedy said. “We need to reclaim our democracy from corporations that routinely pollute our water, and are now taking people’s land for their profit. Governor Cuomo can continue his environmental leadership by denying this 401 water quality certificate.” 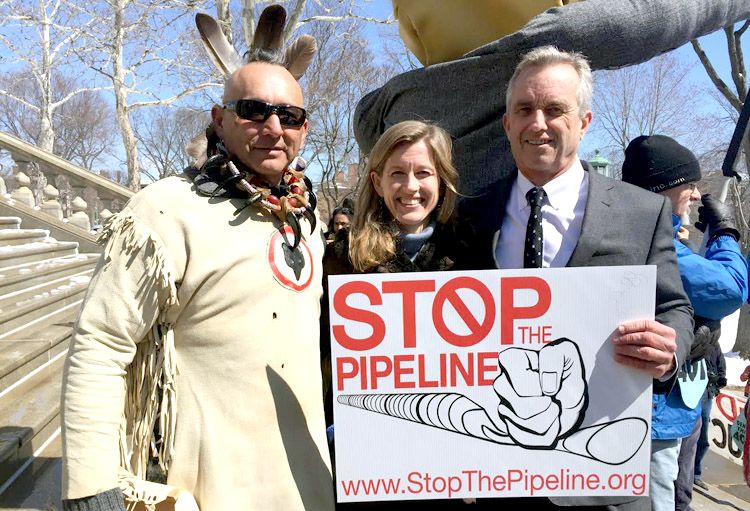 Robert F. Kennedy, Jr. (right), Karenna Gore (center) and Roger Jock of the Akwesasne Mohawks on the capitol steps at the Stop the Pipeline rally in Albany, New York.

“I implore Governor Cuomo to protect the health and safety of all New Yorkers by saying no to dangerous fracked gas pipelines and other fossil fuel infrastructure,” Wenonah Hauter, executive director of Food & Water Watch, said at today’s rally.

“He should start by denying a water quality certificate for the Constitution Pipeline. This project would cross hundreds of streams and put New York’s most essential resource—its clean drinking water—at risk. Governor Cuomo should listen to the hundreds of New Yorkers who are here today, and the many more that they speak for, and reject antiquated fossil fuel infrastructure like the Constitution Pipeline.”

In January, FERC approved limited tree cutting along the Pennsylvania section of the pipeline route, which includes about 25 miles of the 124-mile route. But, FERC delayed similar operations in New York.

On March 1, guarded by heavily armed U.S. marshals, a Constitution Pipeline tree crew began felling trees in the Holleran family’s maple sugaring stand in New Milford, Pennsylvania to make way for the pipeline. The cutting began 11 days after Federal Judge Malachy Mannion dismissed charges of contempt against the landowners for allegedly asking a tree crew that had arrived on the property not to cut the trees.

On March 24, seven people, including Gasland filmmaker Josh Fox and Pennsylvania landowner Megan Holleran, were arrested in the driveway of FERC in Washington, DC, while waiting for commissioners to join them for pancakes topped with the last drops of maple syrup from the Holleran family farm.

“FERC has become the henchmen of the pipeline companies,” Delaware Riverkeeper Maya van Rossum said. “It uses legal loopholes and violations of law to strip states and communities of their legal rights to review, challenge, and even deny pipeline projects. We need Governor Cuomo to stand as our champion by saying “no” to the Constitution pipeline and “no” to FERC.”

Other speakers today included Karenna Gore, director of the Center of Earth Ethics at Columbia University; Kanerahtiio Jock, Kanien’kehá:ka (Mohawk) Bear Clan; William Roche, a property owner whose land and dreams have been taken by eminent domain; Doug Couchon, We Are Seneca Lake; Jim Cutler, Sugar Shack Alliance and Hilltown Community Rights; and representatives of many other groups.