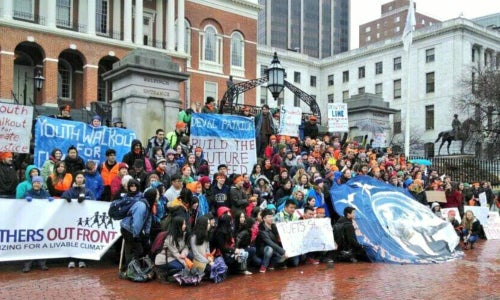 After roughly two hundred students from across Massachusetts walked out of classes today to call for strong action on climate change, Gov. Patrick (D-MA) agreed to meet with activists to discuss a ban on the construction of new fossil fuel infrastructure. 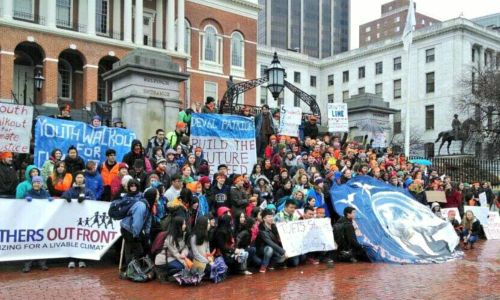 “As a young person, I have an obligation to fight for a livable future, and right now, that means drawing a hard line in the sand against new fossil fuel infrastructure and committing to clean energy solutions,” said Martin Hamilton, a student at Brandeis University. “That’s why I walked out of classes today.” 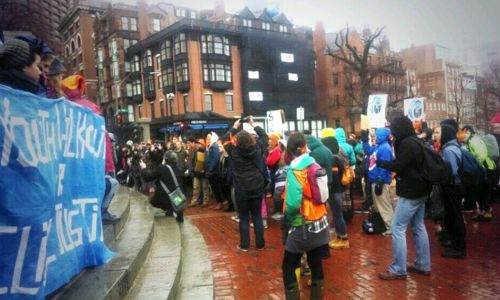 The walkout came after months of campaigning by the grassroots organization Better Future Project and its volunteer-led climate action network 350 Massachusetts. Since summer 2013, activists have been calling on Gov. Patrick to “build only the best” by banning the construction of new fossil fuel infrastructure and meeting all new energy demand through renewables and energy efficiency, using his authority under the 2008 Global Warming Solutions Act.

After rallying outside the Statehouse, the group of students waited outside as a smaller delegation of students entered the State House to request a meeting. They returned shortly with news that they had succeeded in securing an agreement to discuss the proposed ban with the Governor himself.

“Governor Patrick’s response to our walkout today only reaffirmed my conviction that he is the sort of moral leader we need to confront the climate crisis,” said Alli Welton, an undergraduate at Harvard College. “He has already been an outstanding champion of clean energy and climate action, and this ban would be the logical next step for his climate legacy.” 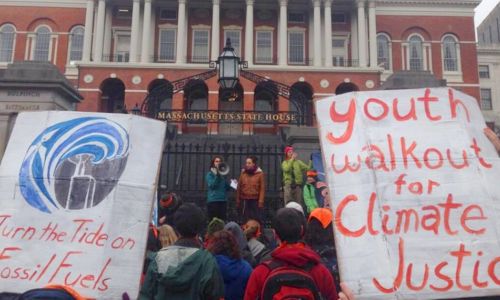 Students who walked out of classes said that they were excited for the opportunity to meet with the Governor, and had high expectations for the meeting.

“It’s a matter of common sense. Our generation understands that now is the time to stop pouring resources into new fossil fuel infrastructure that would lock us into decades of dangerous emissions and instead to start investing in a real transition to viable energy alternatives,” said Henry Jacqz, a student at Tufts University. “Governor Patrick’s demonstrated foresight and leadership on climate make me believe he can take these bold actions and be our generation’s climate hero.”

College Students From Around the World Embark on 2015 Solar Decathlon