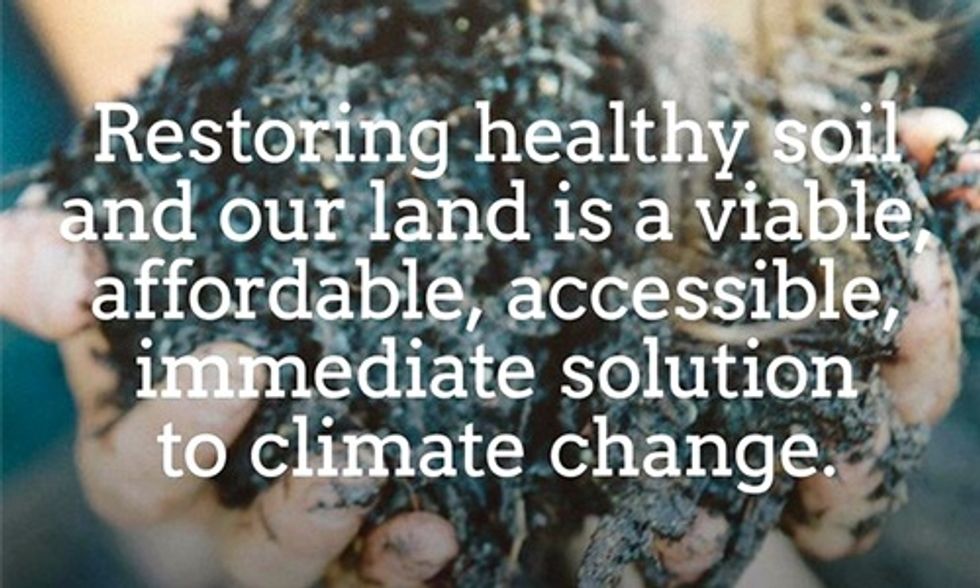 France, Australia, New Zealand, Japan, the U.K., Germany and Mexico are among the more than two dozen countries that have so far signed on to what one day will likely be recognized as the most significant climate initiative in history.

France's 4/1000 Initiative: Soils for Food Security and Climate puts regenerative food and farming front and center in the climate solutions conversation. This is why the Organic Consumers Association (OCA), our Mexico affiliate, Via Organica, IFOAM Organics International and more than 50 of our other activist allies across the globe have signed on in support of the initiative.

@adriangrenier stands for healthy soil as it relieves our vital oceans of acidification. #WhereIstand #EarthToParis https://t.co/cEGSMBETTc
— Kiss the Ground (@Kiss the Ground) 1449495233.0

Unfortunately, the U.S. government is not yet on board with the plan—even though our country's toxic, fossil-fuel-based, heavily subsidized (with taxpayer money), degenerative industrial agriculture system is a primary driver of global warming.

A Global Problem, A Global Solution

Leaders from 190 countries convened in Paris on Nov. 30 for the 14-day COP21 Paris Climate Conference. This year, for the first time in more than 20 years of United Nations (UN) climate negotiations, the UN Framework Convention on Climate Change (UNFCC) set out to achieve something concrete: “a legally binding and universal agreement to make sure the Earth doesn't get warmer than 2°C above pre-industrial levels."

To meet that goal, the French Government launched the 4/1000 Initiative which, distilled to simplest terms, says this: If, on a global scale, we increase the soil carbon content of the soil by .04 percent each year for the next 25 years, we can draw down a critical mass of excess carbon from the atmosphere and begin to reverse global warming.

Is the French initiative realistic? Yes, even by conservative estimates.

Industrial, degenerative farming practices, which include tilling, deforestation, wetlands destruction and the use of massive amounts of synthetic and toxic fertilizers and pesticides, have stripped 136 billion tons of carbon out of the soil and sent it up into the atmosphere. Using the French government's modest estimates, we can transfer, via enhanced plant photosynthesis, 150 billion tons of this carbon back into the soil in the next 25 years.

How do we achieve those numbers? All we have to do is help just 10 percent of the world's farmers and ranchers adopt regenerative organic agriculture, holistic grazing and land management practices—and by help, we mean direct a portion of the billions of dollars earmarked for climate solution projects to farmers who regenerate, not degenerate, the world's soils.

That's a game changer. But only if enough players get in game.

The Plan is Here, The Time is Now

According to a Dec. 1 press release from the French agriculture minister's office:

This initiative intends to show that a small increase of 4/1000 per year of the soil carbon stock (agricultural soils, notably grasslands and pastures and forest soils) is a major leverage in order to improve soil fertility, resilience of farmers and contribute to the long-term objective of keeping the global average temperature increase below 2 degrees.

Le Foll told the French media that the 4/1000 has become a global initiative, but it's just the beginning:

“We need to keep going and mobilize even more stakeholders in a transition to achieve both food security and climate mitigation thanks to agriculture."

Will the U.S. become one of those stakeholders? Or will our leaders side with the Monsantos and Bill Gates of the world and continue to promote an agricultural system that directly and indirectly contributes 50 percent (or more) of the greenhouse gas emissions that are burning up the planet? A system that has failed to feed the world, failed to reduce the use of toxic poisons, failed to bring prosperity to the world's small farmers, failed to produce healthy, nutritious food—a system whose successes can only be counted in terms of gross profits, shareholder value and political clout.

"If we let the world keep warming as fast as it is and sea-levels rising as fast as they are and weather patterns keep shifting in unexpected ways, then before long we are going to have to devote more and more and more of our economic and military resources not to growing opportunity for our people, but to adapting to the various consequences of a changing planet," Obama said. "This is an economic and security imperative that we have to tackle now."

If focusing on the economy and national security is what it takes to motivate Obama to tackle climate change, we're all for it. After all, global warming threatens to displace millions of people, many of whom already are in a struggle just to survive.

We're also all for cutting greenhouse gas emissions, which is why we support the Obama administration's Clean Power Plan which requires states to cut carbon emissions by 32 percent by 2030. Absolutely, let's transition from an extractive, fossil fuel-intensive energy system to a clean, renewable alternative. That transition should be a vital part of any global strategy to mitigate climate change.

But reducing emissions solves only half of the problem. We also have to draw down the billions of tons of CO2 currently heating up the atmosphere. Unless we address the climate change elephant in the room—Big Ag—we will fail to solve the climate crisis.

Scientists estimate the world's soils have lost 50 to 70 percent of their carbon stocks and fertility. Modern chemical-intensive, factory-farm, GMO-based industrial agriculture is largely responsible for that loss. Left unchecked, Monsanto and corporate agribusiness will continue to destroy our soils, pollute our bodies and eventually take the whole planet down with them.

The French initiative is the most direct, most practical and only shovel-ready plan for reversing climate change.

We don't need and don't have time to wait for expensive, unproven techno-fixes à la Bill Gates, some of which haven't even made it to the prototype stage and many of which could come with unintended consequences.

We don't need a corporate-focused “Climate-Smart Agriculture" scheme that promotes business as usual.

And we definitely shouldn't put our faith in Monsanto's “carbon-neutral" but “poison-positive" plan.

What we need is to pressure President Obama to pledge U.S. support for France's 4/1000 Initiative, now. If we're going to subsidize any form of agriculture, it should be the regenerative, truly climate-friendly, health-friendly, farmer-friendly type.

Katherine Paul is associate director of the Organic Consumers Association and a board member of Regeneration International.

Ronnie Cummins is international director of the Organic Consumers Association (U.S.) and Via Organica (Mexico) and a member of the Regeneration International Steering Committee.

Latest Draft of COP21 Climate Agreement: A Slap in the Face

Russia Wants to Be World's Top Exporter of Non-GMO Food