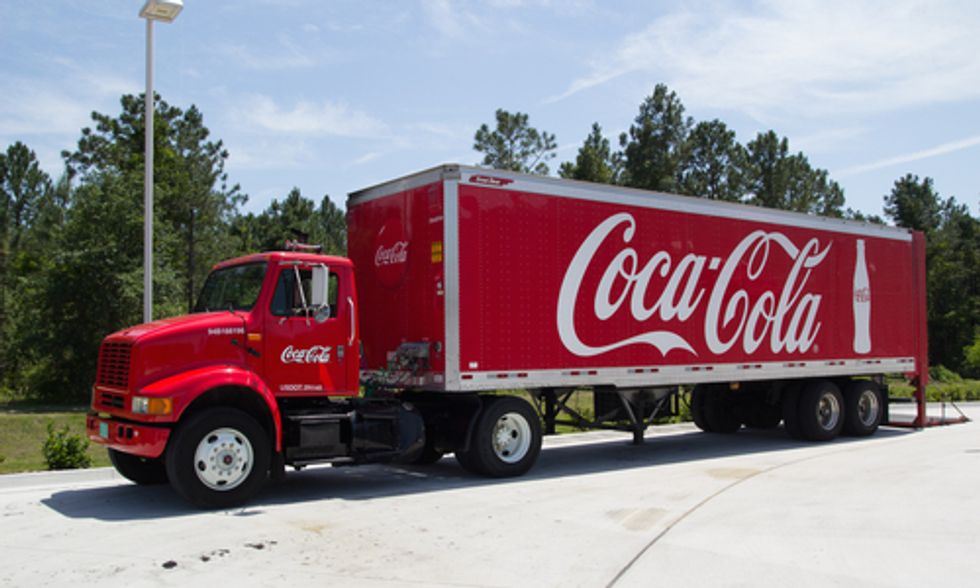 If reducing carbon emissions presents the best chance at fighting climate change, soda corporations deserve a chunk of our attention.

It's no secret that Coca-Cola, PepsiCo and Dr. Pepper are the three largest soda companies in the country. You see their products everywhere, and it's likely that many of those soda bottles, cans and 24 packs were transported to your local store on a truck fueled by tar sands oil. Same goes for products from Gatorade, Lay's and Quaker Oats, which are three of the 22, $1 billion-or-more companies owned by Pepsi.

That's why the Sierra Club and ForestEthics have been pushing those companies to make change for nearly a year now with the Future Fleet Campaign. Their latest push comes in the form of a website, Tastes Like Tar Sands, and a co-authored report about the benefits of avoiding tar sands in corporate fleets.

Protesters on kayaks made sure the Future Fleet Campaign was visible Thursday outside of the Sustainable Brands 2014 conference in San Diego.

"These companies care deeply about consumer feedback, so when consumers ask them to lead on climate solutions, we know they will listen," Sierra Club and ForestEthics wrote on the campaign website. "Washington D.C. remains gridlocked, and oil companies continue their multimillion-dollar, climate-denial [public relations] campaign.

"But these companies have three great reasons to act without delay: First, to protect and strengthen their brand by being climate leaders; second, to reduce fuel usage and save money; and third, to do the right thing for their next generation of customers."

The organizations are targeting the soda companies mostly for their reach. The three companies generated a combined profit of more than $66 billion in 2012. With 100,000 trucks and cars combined, the companies are among the biggest private oil customers in the U.S.

The Sierra Club and ForestEthics gave the companies credit for changing their delivery, production and packaging methods to reduce their carbon footprint, as well as buying some efficient vehicles, but they believe more could be done. That could include more hybrids or plug-ins, advanced tires, anti-idling programs, more-efficient diesel vehicles and aerodynamics.

However, the organizations aren't plotting the unrealistic scenario that the companies stop using oil. Instead, they are encouraging the big three soda providers to construct or adjust contracts to demand that their oil providers not source from refineries that process tar sands. Using information from Oil Change International, the groups provided a map of such refineries across the country.

A map of tar sands-free refineries in the U.S. Graphic credit: Sierra Club and ForestEthics

Corporate and governmental vehicles make up just 7 percent of vehicles on the road, but they consume up to 35 percent of transportation fuel. Walgreen's, Whole Foods, Trader Joe's and Columbia Sportswear are among the 19 companies that ForestEthics has secured commitments from to reduce the impact from their fossil-fuel-based transportation.

"To date, the climate movement has largely given big corporate oil consumers a free pass. Those days are over," the campaign language reads. "With the Future Fleet Campaign, the Sierra Club and ForestEthics will shine a bright spotlight on the need for corporate leadership to head off a climate crisis, starting with oil consumption."

Apple CEO to Climate-Denying Shareholders: ‘Get Out of Stock’