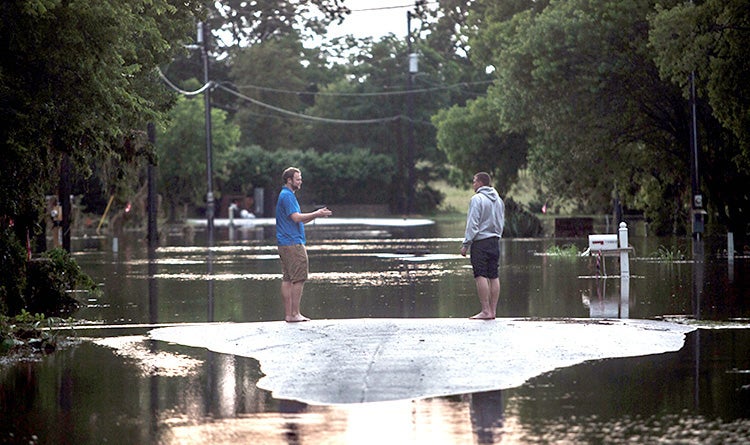 You know the saying. “Everything’s bigger in Texas.” Unfortunately, it applies to climate change in Texas as well. 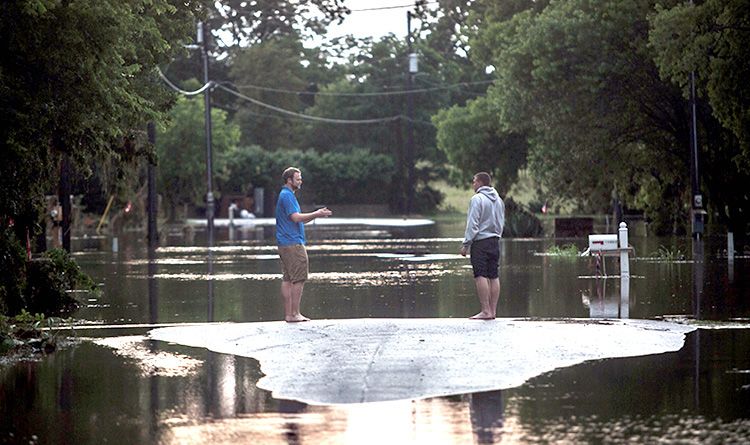 Ben Yock and Dustin Nichols survey the damage done to Nichols’ neighborhood from a dry patch of asphalt in the middle of Bogie Dr. in San Marcos after heavy rains caused more flooding in the areas around the Blanco River on Monday, May 25, 2015.Photo credit: The Texas Tribune / Flickr

With a super-sized state, the impacts of climate change are bigger and badder than in the other 49. In fact, Texas experienced 75 weather and climate disasters between 1980 and 2015, each of which produced at least a billion dollars in losses (across the states in which they impacted), more than any other state. Here’s what global warming means for the Lone Star State. In other words, “Houston, we have a problem.”

just need normal rainfall patterns to come back. It’s been so long since we’ve seen normal; I don’t know what normal is anymore. It’s either too wet or too dry.”

Related: How Is Climate Change Impacting the Water Cycle?

With a warming atmosphere, our oceans are expanding and our glaciers are melting, causing sea levels to rise. The largest sea-level rise in the U.S. is anticipated in the western Gulf of Mexico, where Texas occupies 367 miles of coastline and the equivalent of more than 3,359 miles of tidal shoreline.

With much of the state’s population living near the shore, $30 billion in Texas coastal property is likely to be flooded at high tide by 2050. And as strong storms increase due to climate change, average storm-related losses caused by climate change may increase by up to $222 million per year by 2030.

You don’t need to be a NASA rocket scientist to understand the problem. Yet despite all the Texas-sized impacts, the Lone Star state does have one huge thing going for it: Texans. They’re not afraid to speak their minds, tough as nails and fiercely independent—so there’s good reason to believe Texans can help speak out for energy independence and support climate action in their own backyard.

Coming soon, we’ll share how this is already happening and highlight some of the shining beacons of climate hope in Texas in more detail. Until then, you can still take climate action today.

Join us for our next Climate Reality Leadership Corps training in Houston, Texas this August. There, you’ll work with former U.S. Vice President Al Gore and renowned climate scientists and communicators to learn about what’s happening to our planet and how you can use social media, powerful storytelling and personal outreach to inspire audiences to take action.

Give us three days. We’ll give you the tools to change the world. Learn more.