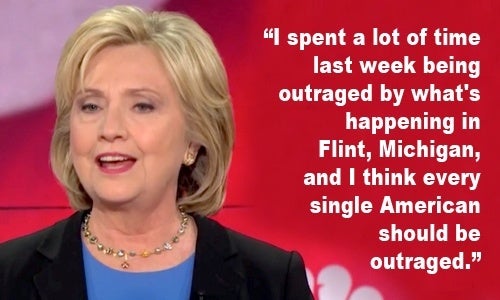 Last night during the fourth Democratic debate in Charleston, South Carolina, Hillary Clinton became the first presidential candidate of either party to mention the water crisis in Flint, Michigan.

In her closing statement she said:

“I spent a lot of time last week being outraged by what’s happening in Flint, Michigan, and I think every single American should be outraged. We’ve had a city in the United States of America where the population—which is poor in many ways, and majority African-American, has been drinking and bathing in lead-contaminated water. And the governor of that state acted as though he didn’t really care. He had requests for help that he basically stonewalled. I’ll tell you what, if the kids in a rich suburb of Detroit had been drinking contaminated water and being bathed in it, there would have been action. So I sent my top campaign aide down there to talk to the mayor of Flint, to see what I could do to help, and I issued a statement about what we needed to do, and then I went on a TV show, and I said it was outrageous that the governor hadn’t acted. I want to be a president that takes care of the big problems and the problems that are affecting the people of our country every day.”

Like Sanders, Clinton has condemned Snyder, but she’s also gone the extra mile, working on both bringing attention to and seeking solutions for this crisis. On the former front, Clinton has used local and national media to keep important details in the public eye, such as the fact that a General Motors factory opted to eschew Flint’s water supply because they noticed it was degrading engine parts, even as state officials were insisting the supply was safe.