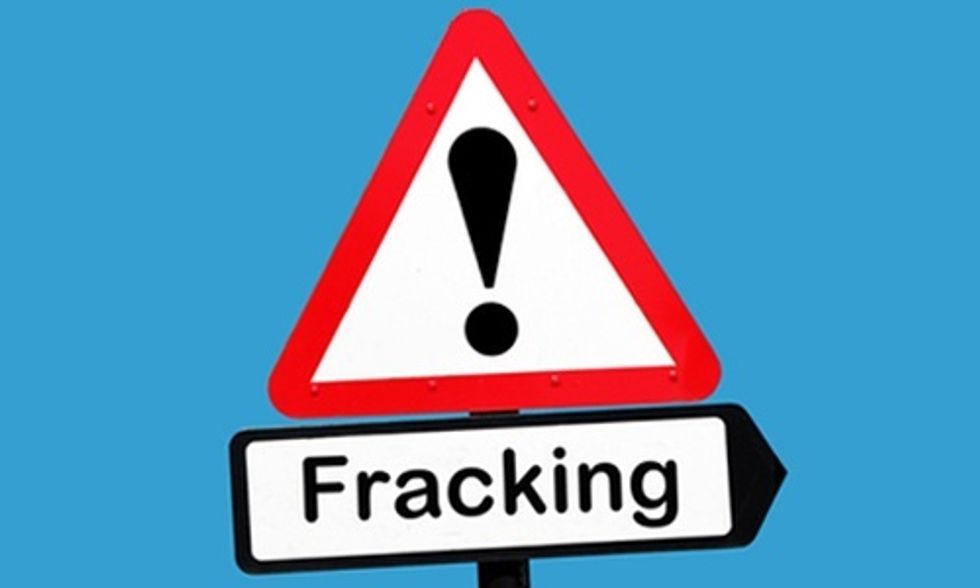 Many major media outlets reported that a new U.S. Environmental Protection Agency (EPA) study found no evidence that hydraulic fracturing (aka "fracking") has had "widespread" impacts on Americans' drinking water, but did not mention the EPA's explanation for why the study doesn't necessarily indicate "a rarity of effects on drinking water resources." The EPA study identified several "limiting factors," including insufficient data, the lack of long-term studies and inaccessible information, which it said "preclude a determination of the frequency of [drinking water] impacts with any certainty."

The EPA emphasized that the lack of evidence of "widespread" drinking water impacts could be due to "limiting factors," and that "data limitations" prevent the agency from having "any certainty" of how often fracking actually impacts drinking water.
Photo credit: Shutterstock

The EPA emphasized that the lack of evidence of "widespread" drinking water impacts could be due to "limiting factors," and that "data limitations" prevent the agency from having "any certainty" of how often fracking actually impacts drinking water:

This finding could reflect a rarity of effects on drinking water resources, but may also be due to other limiting factors. These factors include: insufficient pre- and post-fracturing data on the quality of drinking water resources; the paucity of long-term systematic studies; the presence of other sources of contamination precluding a definitive link between hydraulic fracturing activities and an impact; and the inaccessibility of some information on hydraulic fracturing activities and potential impacts.

In March, InsideClimateNews published a lengthy investigation about the many factors preventing the EPA from conducting a comprehensive study of fracking's impact on drinking water. The investigation which was based on a review of internal EPA documents and interviews with people who had knowledge of the study, noted that geochemist Geoffrey Thyne said the EPA study was "not going to produce a meaningful result," and that "[m]ore than a half-dozen former high-ranking EPA, administration and congressional staff members echoed Thyne's opinion, as did scientists and environmentalists." InsideClimateNews further detailed how the oil and gas industry had prevented the EPA from conducting the prospective studies necessary to determine fracking impacts:

The EPA's failure to answer the study's central question partly reflects the agency's weakness relative to the politically potent fossil fuel industry. The industry balked at the scope of the study and sowed doubts about the EPA's ability to deliver definitive findings. In addition, concerns about the safety of drinking water conflicted with the Obama administration's need to spur the economy out of recession while expanding domestic energy production.

For the study's findings to be definitive, the EPA needed prospective, or baseline, studies. Scientists consider prospective water studies essential because they provide chemical snapshots of water immediately before and after fracking and then for a year or two afterward. This would be the most reliable way to determine whether oil and gas development contaminates surface water and nearby aquifers, and the findings could highlight industry practices that protect water. In other studies that found toxic chemicals or hydrocarbons in water wells, the industry argued that the substances were present before oil and gas development began.

Prospective studies were included in the EPA project's final plan in 2010 and were still described as a possibility in a December 2012 progress report to Congress. But the EPA couldn't legally force cooperation by oil and gas companies, almost all of which refused when the agency tried to persuade them.

Eventually, two companies agreed to participate in the prospective studies, though ultimately the collaborations fell through.

After three years looking for suitable locations for baseline research, the EPA determined it had to move on or risk further delays to the overall study. [InsideClimateNews, 3/2/15]

The following articles neglected to mention the uncertainty surrounding the EPA's findings or any of the limiting factors preventing the agency from fully evaluating the impacts of fracking on drinking water:

By Contrast, Many Other Outlets Noted the Severe Limitations of the Study

[T]he report itself emphasized the agency's well-documented problems in gathering information, including the industry's refusal to cooperate with some testing.

Limitations on data available to the agency, the report said, prevented a determination "with any certainty" of how frequently water supplies had been affected by fracking activities.

The agency said the relatively small number of cases of negative effects it had identified "could reflect a rarity of effects on drinking water resources, but may also be due to other limiting factors."

Those factors, it said, could include insufficient data on the quality of drinking water resources both before and after fracking; the paucity of long-term studies; the presence of other sources of contamination, making it difficult to establish a definitive link to fracking; and "the inaccessibility of some information on hydraulic fracturing." [Los Angeles Times, 6/4/15]

The study does admit several limitations in its scope—limitations that environmentalists say call for further research and study to really understand fracking's implications.

Environmentalists pointed to a line in the report that said the EPA's findings on fracking and drinking water may be subject to limiting factors, such as insufficient data.

"How can the EPA say there are no widespread impacts if they didn't study this on a widespread basis?" said Josh Fox, director of "Gasland." [The Wall Street Journal, 6/4/15]