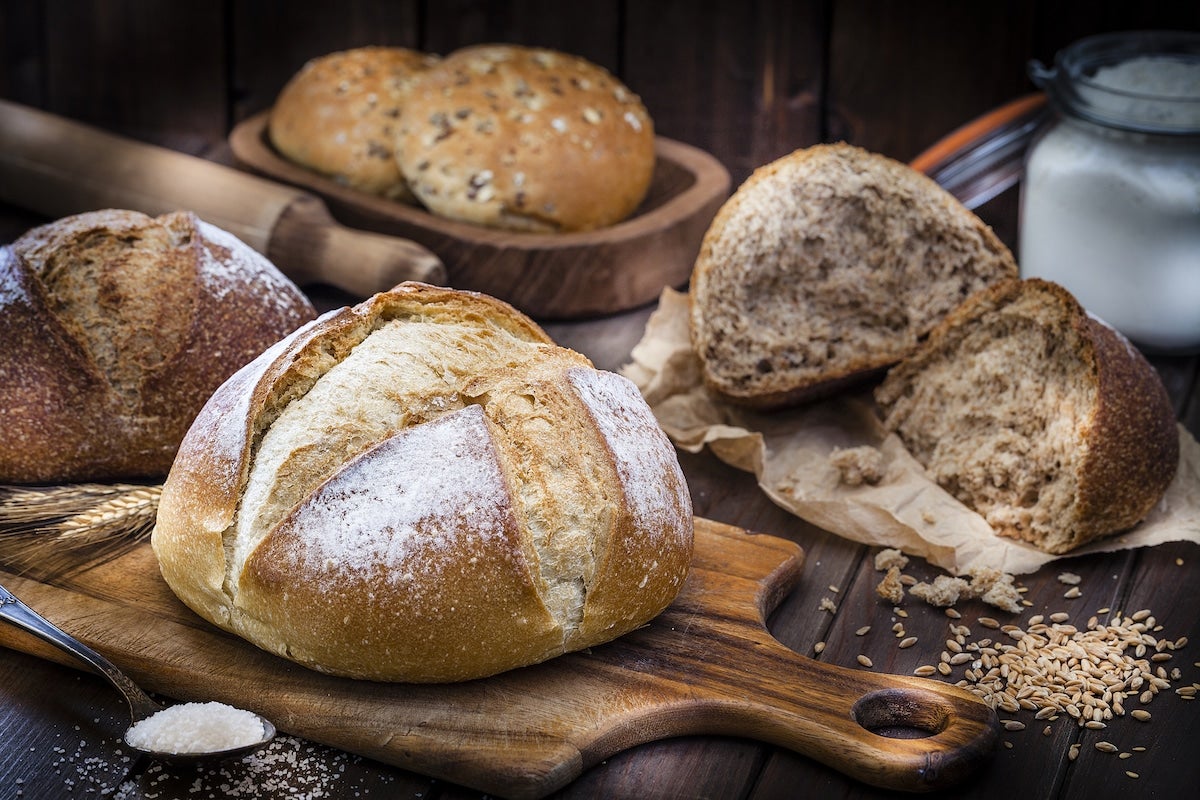 Some types of bread are especially high in vitamins, minerals and fiber. fcafotodigital / E+ / Getty Images

It’s said that there are over 100 different types of bread around the globe, some predating modern society. But what are the healthiest types of bread?

Homemade bread? Bakery fresh bread? Store-bought bread? The source of the bread is almost as important as the type of bread itself when it comes to health. Certain bread types are made from refined grains and offer little nutrition while others are high in vitamins, minerals and fiber. Here are the seven healthiest types of bread available.

Sourdough is easier on the stomach than other kinds of bread due to its prebiotics, making it easier to digest. Additionally, sourdough contains probiotics that are created during its fermentation process: Yes, there’s a science to sourdough starter. Prebiotics are the healthy fibers that feed probiotics, which are found both in your body and in particular foods. Getting a healthy balance of both in your diet promotes good digestion and gut health.

Sourdough bread also has a low glycemic index (GI), which measures the impact of foods on your blood sugar. A 2007 comparative study published in the British Journal of Nutrition found that the bacteria in sourdough may reduce the digestion rate of starch, which means that you get far less of a spike in blood sugar when consuming this bread.

[Related on EcoWatch: Make your own sourdough starter and bread, but first, learn how to capture wild yeast.]

Whole grain adds many nutrients and fiber to your diet. However, sprouted bread is even better — it’s made from whole grains that sprout from exposure to moisture and heat.

Sprouting increases the availability of certain nutrients. Pita bread made with 50% sprouted wheat flour contained more than three times as much folate, according to a 2012 study published in Food & Nutrition Research. Folate is important for converting food into energy.

Sprouted bread also increases the number of antioxidants in grains. Sprouted breads are also high in protein and fiber, making them a more filling choice than refined breads.

Sprouted breads are less likely to raise one’s blood sugar since they are shown to lower glucose response, as revealed in a 2012 study conducted on overweight and obese men. The study was published in the Journal of Nutrition and Metabolism.

Many breads are made from grains that are milled and broken down, while whole grains keep the grain intact: That includes the germ, endosperm, and bran, which is the outer layer high in dietary fiber and other protective nutritive content. Furthermore, epidemiological studies have found that whole-grain intake is linked with many health benefits, including a reduced risk of heart disease, type 2 diabetes and certain cancers, indicates an article published in the Proceedings of the Nutrition Society by Cambridge University Press.

Whole grain breads should list 100% whole-wheat or whole-grain flour as their first ingredient to ensure the bread is truly whole grain. Some manufacturers list that a bread is whole grain on the front of the label but include other ingredients, such as vegetable oils or added sugars.

Rye bread is known for its darker and denser consistency. It resembles wheat bread but is only made from rye flour, traditionally. However, some rye breads are made from a combination of both wheat and rye flour. When compared to wheat, rye bread is often more nutritious.

Rye bread may help satiate your appetite more easily and also have a reduced impact on blood sugar. A 2009 study published in BioMed Central’s Nutritional Journal was conducted on 12 healthy adults: It found that those who consumed whole-grain rye bread released less insulin than those who ate white-wheat bread. Having too much insulin in your blood may increase your risk of type 2 diabetes. Sprouting also increases rye bread’s fiber content and makes it healthier than non-sprouted rye.

Oat bread is made from a mixture of oats, whole-wheat flour, yeast, salt and water. Oats increase the nutritional content of this bread and are linked to a variety of health benefits.

Oats are high in fiber, such as beta-glucan which is shown to help decrease cholesterol, decrease high blood pressure and regulate blood sugar. A meta-analysis of 28 studies discovered that consuming at least three grams of oat-based beta-glucan every day significantly reduced LDL (bad) and total cholesterol levels. The 2014 study was published in The American Journal of Clinical Nutrition.

Oats also contain a number of beneficial nutrients, such as vitamin B1, iron, magnesium and zinc.

Some oat breads are made from refined sugars and other unnecessary ingredients. Look for oat flour or oats as the first ingredient on the label to ensure a better quality oat bread.

Flax bread is commonly made from flax seeds and whole-grain flours, and it’s among the healthiest breads that you can eat. High fiber content means healthier digestion. Flax seeds are high in alpha-linolenic acid (ALA), which is an omega-3 fatty acid found in plant foods. A systematic review of 27 studies revealed that an elevated intake of ALA was linked with a decreased link of heart disease. The review was published in 2012 in The American Journal of Clinical Nutrition.

Flax seeds also contain compounds known as lignans that act as antioxidants. Lignans are protective against certain cancers, according to the Linus Pauling Institute at Oregon State University.

A study conducted on 6,000 postmenopausal women revealed that those who often consumed flax seeds had a 18% reduced risk of developing breast cancer, when compared to those who didn’t eat flax seeds. The 2013 comparative study was published in Cancer Causes Control.

A 2018 literature review published in Frontiers in Nutrition found that flaxseeds presents efficacy in the possible reduction of tumor growth in patients with breast cancer, primarily in postmenopausal women.

Do you have a gluten intolerance or sensitivity? Gluten-free breads are among the healthiest breads you can eat and are typically made from such gluten-free flours as almond, brown rice, coconut, corn, potato or tapioca.

However, gluten-free flours themselves are not necessarily healthier than those that contain gluten. Some gluten-free bread varieties also contain added sugar and are made from refined flours. Some coconut or almond flour breads are lower in calories and carbs but higher in protein and fiber than other gluten-free loaves.

[Related on EcoWatch: Learn more about 9 Super Healthy Gluten-Free Grains as recommended by a registered dietician.]

Breads containing vegetables, fruits, legumes, nuts and seeds may contain more fiber and beneficial nutrients than other varieties, as long as they don’t have unnecessary additives. Those on a low-carb diet may wish to lower their bread consumption and look for breads that contain fewer carbohydrates.

Always read the ingredients of store-bought bread closely. If you make bread at home, it’s easier to customize the recipe to your unique dietary needs and tastes.