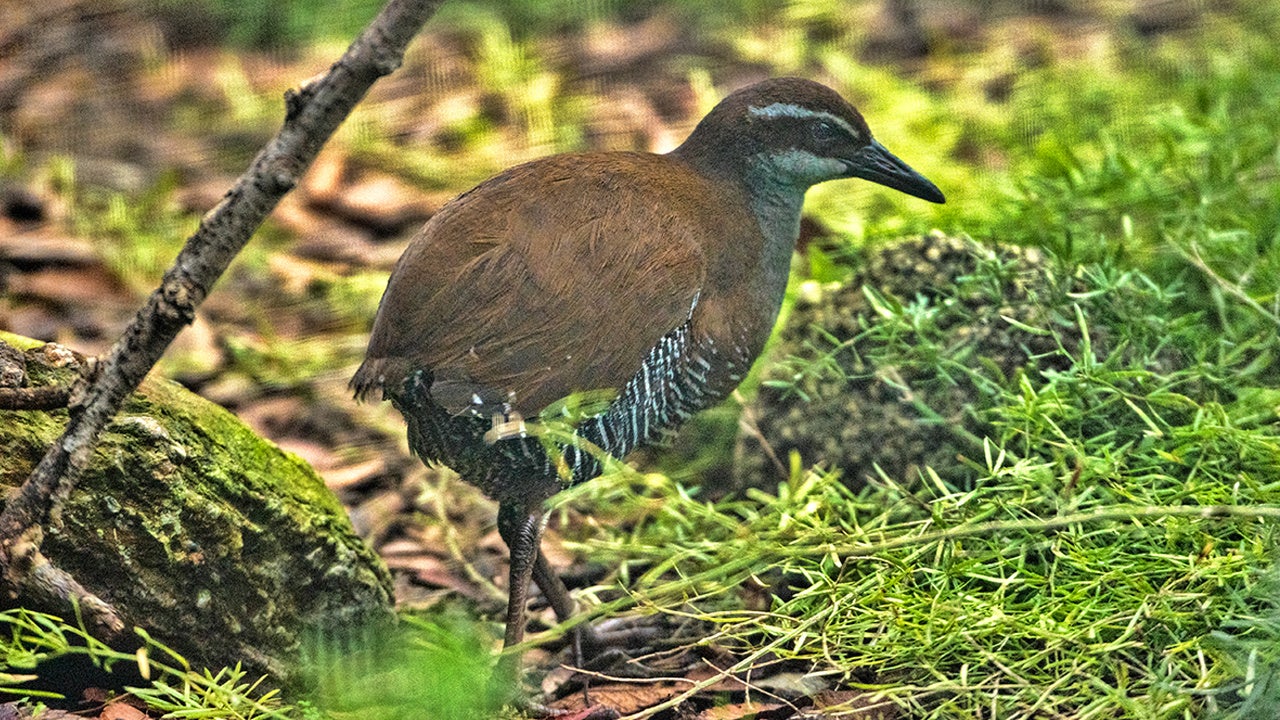 When you walk into the tropical rainforest room at the National Aviary in Pittsburgh, the first thing you’ll probably notice are the hyacinth macaws perched in mango trees. The feathers of these massive parrots are so impossibly blue that the birds look like birthday party piñatas. And the first thing you’ll likely hear is the trill of the much tinier laughing thrushes as they swoop from tall cacao plants to the indoor-jungle floor. But watch out for Gus! He’s the blue-headed great argus pheasant who likes to commandeer the walkway while unfurling his four-foot-tall fan of feathers in an attempt to woo female pheasants.

In all, there are 90 tropical birds in this lush and misty room, representing 32 species from all over the world. But in the midst of all this avian splendor, there’s one bird you aren’t likely to set eyes upon: the Guam rail. They’re in there — I just doubt you’ll spot one.

“We can’t make a liar out of me,” said Kurt Hundgen, the aviary’s director of Animal Collections as he scours the understory looking for the small, dirt-colored birds. Not seeing any, Hundgen purses his lips and whistles out a few short calls of rail-speak. “There are nine rails in here!” he laughs. None answer his calls.

Unfortunately, the rail is even more difficult to find in its native habitat on the Micronesian island of Guam. Impossible, actually. This is because sometime in the mid-1900s, brown tree snakes made their way onto the island, likely stowed away in cargo delivered by a U.S. Navy supply ship. And once these lithe, narrow-necked serpents made landfall, they started gobbling up every native species in sight. Prior to the snakes’ arrival, Guam had no large predators that would eat eggs or chicks. So it took just a few decades before 9 of Guam’s 11 native species of forest-dwelling birds disappeared for good down the snakes’ gullets. In 1987, the Guam rail was added to the International Union for Conservation of Nature’s (IUCN) ignoble list of species considered extinct in the wild.

But there is some good news. Just before the species left this world entirely, scientists managed to capture 21 rails and create a captive breeding program on Guam and at several mainland American institutions, including the National Aviary. The breeding program has performed so well that new populations of Guam rails have been reintroduced to the nearby islands of Cocos and Rota. These islands never had rails, but they also don’t have any snakes, which makes them ideal sanctuaries for Guam rails. And with just 60 birds on Cocos and 200 on Rota, Hundgen says there are no indications that the birds are becoming an invasive species themselves.

To date, Pittsburgh has provided 39 birds. That’s more than any other Association of Zoos and Aquariums institution, Hundgen points out proudly.

The IUCN announced at the end of last year that the continued survival of the breeding program’s birds justified relisting the species as critically endangered — a step up from extinct in the wild. Guam rails are only the second bird in history to accomplish this feat. The other is the California condor, North America’s largest bird. The condor’s numbers plummeted in the last century due to poaching, lead poisoning, and habitat loss. If not for extreme conservation interventions, both the California condor and the Guam rail would no longer be around.

The rails were lucky in that they breed well in captivity, but reproduction is just part of the story. To successfully reintroduce an animal to the wild, you also have to prepare it for what it will face there. Hundgen believes Pittsburgh’s tropical enclosure has been especially beneficial on that score. The rails’ wild-like tropical rainforest habitat is 80 feet long, 40 feet wide, and 60 feet tall, allowing them to constantly interact with other birds as well as to practice defending their territories from other rails — just like they would do in a real forest.

As if to demonstrate this visually, an aviculturist named Danielle Minkus appears below the raised walkway where Hundgen and I are talking and starts flinging handfuls of mealworms into the leaf litter. Almost immediately, half a dozen long-legged birds with black and white underbellies begin to materialize from the dark understory. They find and snatch up the mealworms Minkus tosses so quickly, I find myself wondering how a snake would ever be able to catch one of them.

But that would be underestimating the brown tree snake. These suckers can grow longer than 10 feet, are excellent climbers, and pack a venomous bite. Most unfortunately, they have next to nothing keeping their numbers in check on Guam.

“At one point, there were so many snakes on Guam that they were causing electrical outages on a daily basis,” says Scott Boback, an animal ecologist at Dickinson College. This happens when a large snake turns itself into a living conductor by trying to move between a power line and a tree branch.

Oddly, acetaminophen is the snake’s kryptonite, with just a small dose able to disrupt its blood’s ability to carry oxygen. Scientists like Boback have found that dropping pills glued to dead mice from helicopters flying over fenced-off areas can actually put a considerable dent in the local snake populations. Still, as Boback showed in a recent study, when just a handful of snakes remain, it is nearly impossible to find them. Which means it may never be safe for the Guam rail to return to Guam.

So prevention on the rails’ new islands is “absolutely paramount,” said Boback. To that end, the U.S. Geological Survey has installed snake-proof fencing all around the port on Rota — the only such structure on Earth.

To contribute to the effort of returning these birds to the wild has been rewarding, said Hundgen, but we shouldn’t lose sight of just how much time, effort, and money it takes to bring a species back from the brink. “You can bring a species back. It can happen,” he said, as the aviary’s nine rails disappear back into the underbrush. “But it’s 35 years later. It took 35 years to get that.”

Honestly, it’s incredible that we still have Guam rails at all, Hundgen said. “It’ll probably go down in the conservation history books.”