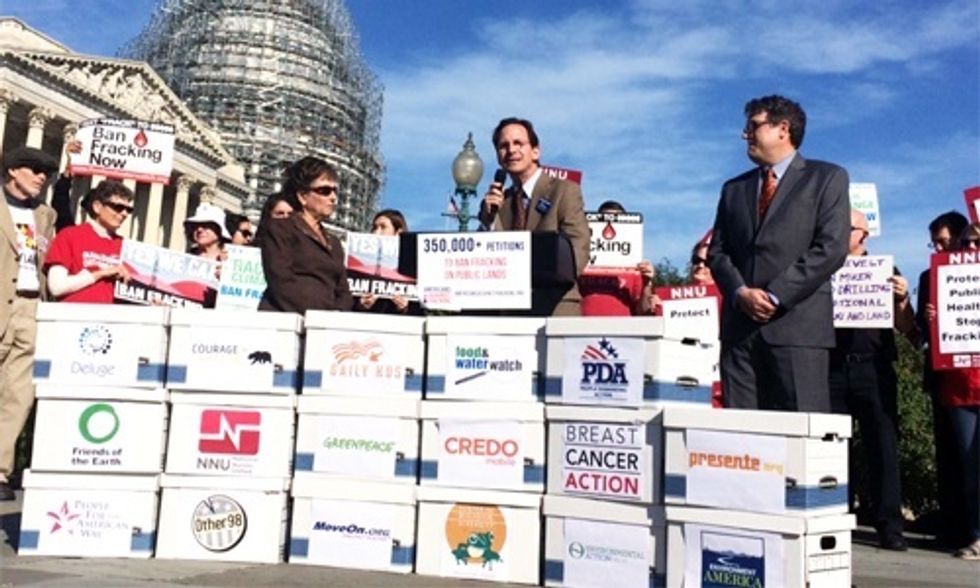 Today, more than 15 advocacy groups gathered outside of the nation's Capitol, with Rep. Mark Pocan (WI-2) and Rep. Jan Schakowsky (IL-9) to deliver more than 350,000 petitions urging Congressional support of the Protect Our Public Lands Act, H.R. 1902. The legislation is the strongest anti-fracking bill introduced in Congress to date and would ban fracking on public lands. It was introduced this Earth Day by Reps. Pocan and Schakowsky and seven other original cosponsors. The bill now has 27 cosponsors.

“It’s clear from the over 350,000 petitions being delivered today that Americans across the country share my concerns about fracking and its impact on the environment,” said Rep. Pocan, the bill’s sponsor. “Our national parks, forests and public lands are some of our most treasured places and must be protected for future generations.”

“Our public lands are one of America’s greatest assets.  They have been preserved and protected by the federal government for over one hundred years,” said Rep. Schakowsky, an original cosponsor of H.R. 1902. “We owe it to future generations to maintain their natural beauty and rich biodiversity. The Protect Our Public Lands Act—which would prevent fracking damage to those lands—is an important step in that direction.”

“My constituents in New Jersey, and millions more Americans in New York, Pennsylvania and Delaware all rely on clean drinking water from the Delaware River,” said Congresswoman Bonnie Watson Coleman, another cosponsor of the bill. “Fracking there is a direct threat to their health, and to the green spaces and environment we’ve worked hard to protect. When people visit federal land—in New Jersey and around the country—they expect pristine landscapes, clean air and sparkling water. We can’t afford to put that at risk just because we’re unwilling to move away from fossil fuels.”

Fracking is a dangerous method of extracting oil and gas that has no place on our public lands. Fracking produces large volumes of toxic and even radioactive waste and risks accidents, leaks, spills and fires, while competing for scarce water resources, polluting the air and water, and exacerbating climate change.

“The evidence that fracking is bad for the environment, public health and local economies is staggering and the American people are taking notice, said Mitch Jones, senior policy advocate for Food & Water Watch. “Hundreds of thousands of Americans from across the country are demanding that America’s cherished public lands not be fracked. By passing The Protect Our Public Lands Act Congress can get on the right side of history: protecting national resources and heritage, while also decreasing America’s contribution to climate change."

About 20 percent of all potential U.S. oil and gas lies beneath public lands. Already, fracking companies lease more than 34 million acres of public lands, and more than 200 million more acres could be fracked in the future.

“Every year, the Department of the Interior hands over vast areas of publicly-owned land to the fracking industry to be pillaged for corporate profit,” said CREDO Action campaign manager Zack Malitz. “Encouraging fracking on public lands puts our air, water and the health of nearby communities at risk,” Malitz continued, adding, “if we want to stop the worst effects of climate change, we have to ban fracking on public lands.”

"Fracking has marred landscapes and ruined waterways around the country,” said John Rumpler, senior attorney with Environment America. “Until this dirty drilling is banned altogether, the least we can do is keep it out of some of America’s most treasured natural areas—from Chaco Canyon to the White River to the George Washington National Forest.”

By passing The Protect Our Public Lands Act Congress can get on the right side of history: protecting national resources and heritage. Photo credit: Food & Water Watch

“The scientific evidence of the myriad of health harms associated with fracking continues to grow,” said Karuna Jaggar, executive director of Breast Cancer Action. “That’s why today, we’re telling our legislators that there’s no place on our public lands for this inherently toxic process, which threatens to expose the public to harmful chemicals linked to increased risk of breast and other cancers.”

Unfortunately, oil and gas corporations have been drilling and fracking on public lands, without regard for the people who these lands were intended to be enjoyed, and not exploited by. Fracking has already seriously damaged our public lands and ground water, and areas buffering America’s most precious national parks and monuments are at increasing risk.

“When big energy corporations can pour unlimited money into our political system, their interests are able to overshadow the public good. Despite the outcry from ordinary Americans, fracking has already brought serious harm to our public lands,” said Rio Tazewell, campaign coordinator at People for the American Way. “We need real reform so our elected leaders are working for ordinary Americans instead of wealthy corporations.”

Deutsche Welle
Politics
Ban Ki-moon, Secretary-General of the UN and chair of the Global Center on Adaptation, is seen speaking during a press briefing on the upcoming Climate Adaptation Summit 2021 to be held Jan. 25 and 26. Sem van der Wal / ANP / AFP/ Getty Images