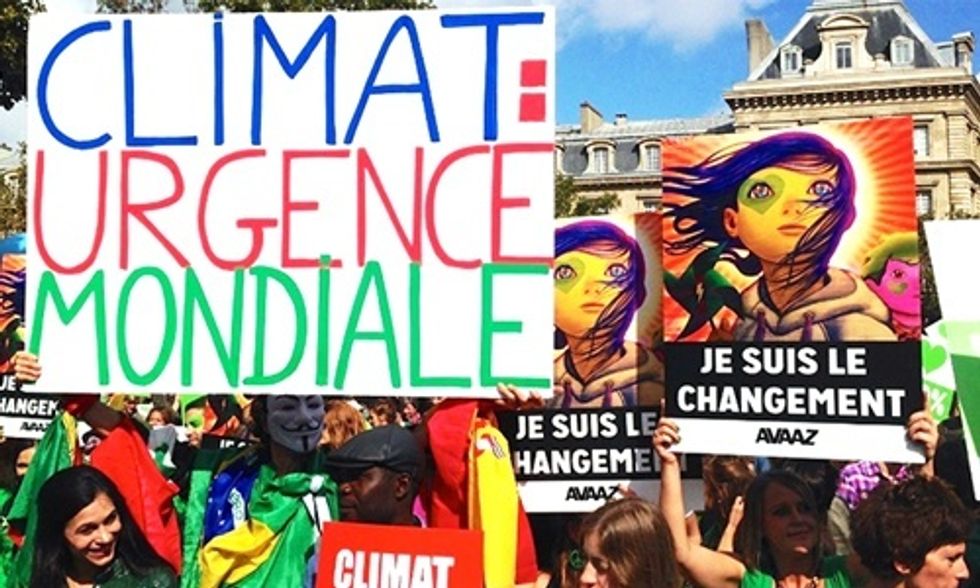 Ahead of international climate talks which are about to begin in Paris, an international coalition of NGOs, political figures and civil society groups on Thursday demanded French President François Hollande lift the ban on protests and marches despite recent violence. The groups say the French government cannot proclaim a "commitment to democracy and freedom" while simultaneously suspending "democracy and freedom."

Climate activists march in Paris in 2014. On Thursday, a coalition of international NGOs and individual climate activists have demanded that France lift its imposed bans on large protest for the COP21 talks. Photo credit: YouTube screenshot

In a letter addressed to Hollande, which has also taken the form of an online petition that anyone can sign, the climate justice leaders expressed understanding for how the recent violence in Paris—also mirrored in attacks in Beirut, Ankara, Bamako and over the skies of Egypt—has made the security situation tense, but indicated the effort to shut down large scale protests is both short-sighted and counter-productive.

"People from all over the world are flocking to Paris to have their voices heard on one of the most urgent challenges of our lifetime—the threat of climate change," said Nick Dearden, head of the UK-based Global Justice Now, which is spearheading the effort to lift the imposed ban. "It is essential that there is robust participation from civil society during the climate talks and that world leaders are held accountable for how they engage with the issue."

As the letter to Hollande states plainly: "We urge you to reconsider the decision to prohibit the demonstrations in Paris. We understand the need to keep citizens safe, including those mobilizing on climate change. It must be possible to find a way to do this short of banning our demonstrations. Many other mass events and gatherings continue to happen in Paris on a daily basis."

Dearden continued by saying that one of the clear aims of terrorists who "carrying out atrocities like we have seen in Paris is to attempt to disrupt and derail how ordinary people go about their lives." Given the absolute urgency of addressing the global climate crisis, the letter sent to Hollande suggests the stakes are simply too high to submit political space during these crucial international talks.

"The French authorities have said that 'life must go one' with regards to public occasions like football matches," continued Dearden, "and we call on President Hollande to use similar logic in standing strong against these attacks by allowing people the fundamental right to protest on crucially important issues like climate change during the UN talks."

Following the announcement that major protests would be significantly curbed or cancelled—including a large march and demonstration planned for Nov. 29— the largest environmental groups and event organizers have been scrambling to adjust their plans. Though almost all groups have expressed desire and willingness to incorporate changes to ensure the safety of all participants, it has been hard for many to shake the suspicion that officials in France have used the opportunity of the Paris attacks to squelch the participation of civil society during the UN Conference of the Parties (COP21) talks.

"The French authorities are using the shock of the Nov. 13 killings to cancel demonstrations throughout the country, even in small cities where no terrorist threat is plausible," said Thomas Coutrot, a spokesperson for Attac France, one of the key organizations planning the Paris demonstrations. "Do they want to keep us silent in the face of the results of COP21 and its probable failure to tackle effectively climate change? Attac and its partners will be pushing hard to ensure our voices are not silenced."

In an op-ed last week by Naomi Klein, who also signed Thursday letter to Hollande, the Canadian author and activist explain the multiple reasons why the banning of protests in Paris is so disturbing. In addition to the overt silencing of the very people who are threatened most by climate change, namely the poor and the powerless of the global south, Klein argues that the symbolism of banning protest is also key:

"Climate change is a moral crisis because every time governments of wealthy nations fail to act, it sends a message that we in the global north are putting our immediate comfort and economic security ahead of the suffering and survival of some of the poorest and most vulnerable people on Earth. The decision to ban the most important spaces where the voices of climate-impacted people would have been heard is a dramatic expression of this profoundly unethical abuse of power: once again, a wealthy western country is putting security for elites ahead of the interests of those fighting for survival. Once again, the message is: our security is non-negotiable, yours is up for grabs."

As many have argued in recent weeks, the effort to battle human-caused climate change is deeply linked with the violence and desperation that has become so pervasive in the world. And as the letter states, "A peaceful world can only be built on equality, solidarity and sustainability. We must be able to say this in Paris."

And its underlying message: The more the better. The louder the better.