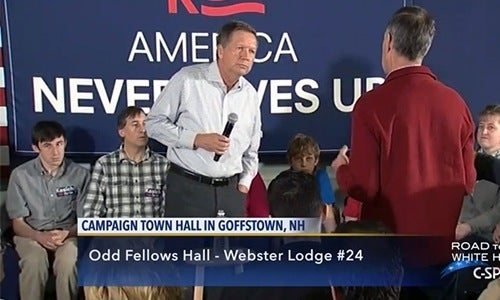 At a town hall event in New Hampshire, presidential candidate John Kasich paid lip service to growing a clean energy economy, despite having hindered the growth of Ohio’s wind, solar and other renewable energy industries.

“In Ohio, we are going to have development of solar and wind,” Gov. Kasich said in New Hampshire. “If the legislature wants to gut it, then I’m going to go back to the goal that we had, which was unpalatable, because I’m not playing around with this.”

On June 13, 2014, Gov. Kasich signed a freeze on clean energy mandates into law. By slowing the growth of clean energy in the state, this bill had far reaching negative consequences to the environment and the economic prosperity of Ohio. The freeze is set to expire at the end of this year and leaders from across the Buckeye State are calling for clean energy solutions.

“As a business owner in Ohio who works in the clean energy sector, I’ve had the rug pulled out from under me by Ohio’s freeze on the renewable energy standards,” Alan Frasz, president of Dovetail Solar and Wind in Cleveland, said. “We were moving toward energy independence in Ohio, but with the dismantling of the renewable energy standards by Gov. Kasich and the legislature, many of those job opportunities have vanished.”

“For the past year, our Ohio legislature has sat back and ignored the cry of the Earth and the cry of the poor. They have put a deep freeze on our children’s future by neglecting to act on climate change,” Rev. Dr. Tim Aherns of First Congregational Church in Columbus said. “Our state leaders can no longer hide behind political excuses to perpetuate this moral failure. Gov. Kasich must stand firm on his recent recognition that Ohio is ready for renewables. We are counting on him to lead the charge.”

According to a recent study released by Policy Matters Ohio and NextGen Climate America, in partnership with Green for All and Ohio Partners for Affordable Energy, Ohio’s 2014 freeze on energy efficiency standards reduced weatherization efforts by 26 percent—costing Ohio families more on their electricity bills, causing more reliance on payment-assistance plans and creating fewer job opportunities in Ohio’s clean energy economy.