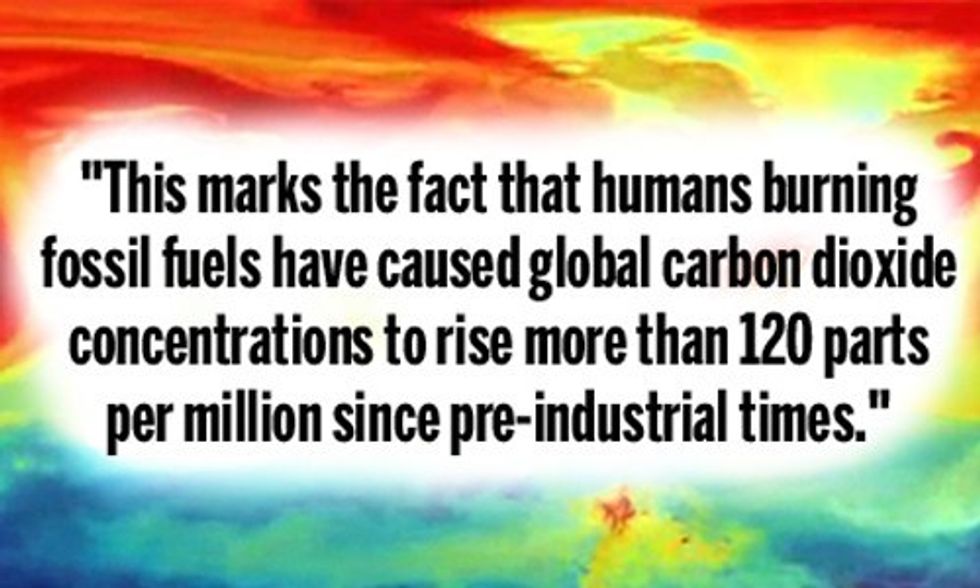 Marking yet another grim milestone for an ever-warming planet, the National Oceanic and Atmospheric Administration (NOAA) revealed on Wednesday that, for the first time in recorded history, global levels of carbon dioxide in the atmosphere averaged more than 400 parts per million (ppm) for an entire month—in March 2015.

This image shows how carbon dioxide moves around the planet.

"This marks the fact that humans burning fossil fuels have caused global carbon dioxide (CO2) concentrations to rise more than 120 parts per million since pre-industrial times," said Pieter Tans, lead scientist of NOAA’s Global Greenhouse Gas Reference Network, in a press statement. "Half of that rise has occurred since 1980."

This is not the first time the benchmark of 400 ppm has been reached.

"We first reported 400 ppm when all of our Arctic sites reached that value in the spring of 2012," explained Tans. "In 2013 the record at NOAA’s Mauna Loa Observatory first crossed the 400 ppm threshold."

However, Tans said that reaching 400 ppm across the planet for an entire month is a "significant milestone."

A tweet released by NOAA on Wednesday shows that this development is consistent with rising levels over recent years.

However, zooming to a wider historical lens shows an even more dramatic increase. During pre-industrial times, CO2 levels were at 280 ppm. Scientists have warned that, in order to achieve safe levels, CO2 must be brought down to a maximum of 350ppm—the number from which the environmental organization 350.org derives its name.

Bill Snape, senior counsel to the Center for Biological Diversity, told Common Dreams, "The fact that we are now firmly over 400 ppm for first time in human history indicates to me that we ought to be moving with much more urgency to fix the underlying problem."