Get Ready for the Real Climate Wars 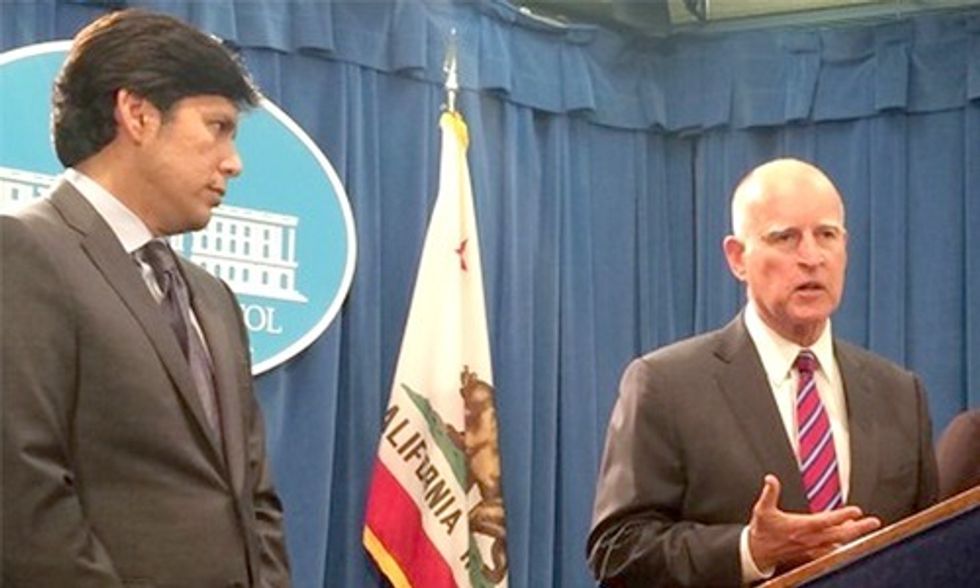 The oil industry just counted coup, scoring an important tactical victory in the most important domestic climate fight of the year. (No it’s not President Obama’s Clean Power Plan rule. Rather it is California’s Gov. Jerry Brown’s crusade to commit his state—and effectively, with a time lag, the U.S. economy—to another 25 percent cut in carbon emissions, on top of the roughly 25 percent that President Obama has now teed up and will pledge in Paris).

The California State Senate passed the legislation embodying Gov. Brown’s overall goals including transportation cuts. But the oil industry mounted a massive disinformation campaign and was able to force Brown to drop one of the three sectoral goals—a 50 percent reduction in use of oil in California—from the bill. The sections of the bill involving electricity and buildings made it to the finish line. Even after frantic efforts at deal making, oil held on to enough business oriented Democratic Assembly votes to force the transportation element to be dropped. It was a heartbreaking reminder of the power oil still wields in American, and California, politics.

Behind the excitement and drama, a number of things are clear about the struggle to cut oil pollution:

1. There is no priority higher for the oil industry than blocking Brown’s goal of reducing the state’s oil consumption by 50 percent by 2030. It is an existential threat to the oil industry, because if the state that invented the freeway can do without oil, so can the world—and if the world cuts its oil dependence even in half, almost all of that will be cheap OPEC oil from the Persian Gulf, not pricey, and risky, crude from Shell’s U.S. Arctic plays or Canada’s tar sands.

2. The oil industry is playing desperate defense. While Brown and his allies were unable to pass a binding state oil consumption law, the governor still retains executive authority to move forward. He can set post 2020-standards for low carbon fuels, beef up the state's electric vehicle sales mandates, and invest much more heavily in transit. These are precisely the steps the state would have taken to get a 50 percent cut—but without legislation a future governor could have undone them. That's really the only victory the oil industry salvaged.

3. The industry's victory is tactical and symbolic—not strategic. After the vote Brown was clear. "Oil has won the skirmish. But they've lost the bigger battle," he told a press conference. "Because I am more determined than ever. We're not going to miss a beat." Indeed, the oil industry waged a campaign using a series of straw-men—the bill meant gasoline rationing, bans on mini-vans, limitations on how much people could drive. But the actual mechanisms the state planned to use—requiring alternative fuels and alternative vehicles to be made available, encouraging transit—bear no resemblance to the industry's claims—so it has done nothing to trigger a voter back-lash if Brown now moves, for example, to set more ambitious long term low carbon fuel standards—which is actually the industry's least favored outcome. "

4. Staggering as a 50 percent cut in oil use sounds, (even to me,) the basic framework has been put in place. As Paul Rogers pointed out in the San Jose Mercury, just continuing the pace of improved efficiency required by current federal auto standards, carrying out the already stated goals of electric vehicle market share, delivering on advanced bio-fuels, and improving transit access and better urban planning will take the state most of the way there. This is not, repeat, not a revolution—"It is a huge target. It's a significant milestone. We need to continue to innovate, but Californians are already on a path to get there," Dan Kammen, a UC Berkeley professor of energy told Rogers.

5. The fight is being waged with the usual lies and blackmail of current politics—oil is spending millions on television ads, sounding the alarm about gasoline rationing, and threatening low-income areas and their legislators with higher driving costs—although the logic of the market suggests that if demand for currently overpriced California grades of gasoline fall off the cliff, so will the price.

6. But behind these incremental steps to a 50 percent cut, there does lurk a revolution. The electric vehicle revolution and the autonomous car are being birthed just across San Francisco Bay from each other, with Tesla’s Fremont Plant and the secret plans of Apple and Google signaling that the roadway of the future certainly won’t be powered by oil and may not even have drivers. And the two forces powerfully reinforce each other. In many cities a third of total miles are spent looking for parking places—which autonomous cars don’t need—and if you don’t drive your vehicle, you don’t really need to own it—so car sharing becomes a norm, and only takes 10 percent as many vehicles to take just as many trips. (Your car sits parked, probably, 95 percent of the week. That’s the insight behind Uber. But a driverless Uber is the real future).

7. So is the oil industry being foolish in fighting California so ferociously? Not really. If they can slow California, and intimidate other politicians, their product may have 30 years of high sales instead of 15—and that makes them worth, almost precisely, twice as much. So big money is at stake, even in a delaying game. As the California revolution spreads, Big Oil’s war chest will fatten. Coal was just an opener. Get ready for the real Climate Wars.