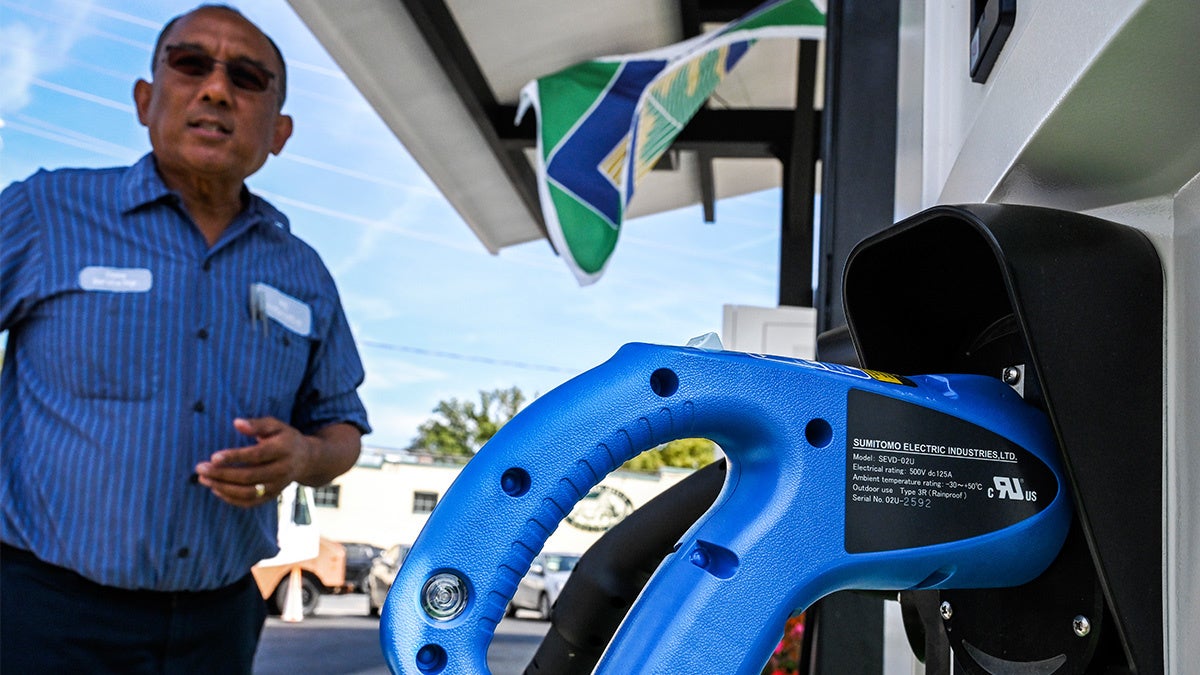 Depeswar Doley, the owner of RS Automotive in Takoma Park, Maryland since 1997, teamed up with the Maryland Energy Administration and the Electric Vehicle Institute to complete the transition. The two agencies funded the station, which has a high-powered, 200 kilowatt, four dispenser system that delivers 50 kilowatts and higher for EV charging. That means a car can power up 80 percent of its capacity in just 20 minutes, as WJZ, the CBS affiliate in Baltimore, reported.

RS Automotive has been in Takoma Park since 1958.

Doley found himself increasingly frustrated by the way oil and gasoline companies issue contracts to vendors like himself. He bristled against the clauses that prevented him from using multiple suppliers and the clauses that extend contracts when sales quotas are not met, as CNBC reported. He was losing money selling gas.

“That part of his business just wasn’t working, and he wasn’t happy with it,” says Matthew Wade, CEO of Electric Vehicle Institute, as Fast Company reported. “And we said, well, we have this great idea. What do you think about converting it to an all-electric charging station?”

The final nudge came from his daughter who is concerned about the climate crisis, according to CNBC.

“My daughter, who is 17, she is the one who convinced me after I told her that I was going to talk to the [Electric Vehicle Institute] guys,” said Doley, as CNBC reported.

Doley recognizes the financial risk since the number of electric cars on the road is a tiny fraction of vehicular traffic and not many people are used to waiting 20 minutes at a gas station, but some things are more important than money.

“You notice there are not too many electric vehicles on the road,” he said to CNBC. “So it’s not something that I expect to become rich overnight or something like that, but it’s a good cause [and] good for the environment.”

Doley also hopes he will set a precedent for other business owners.

I know this is a good cause, and this is something new,” he told CNN. “What I’m doing, maybe it will encourage other businesses owners and encourage the electric car business.”

Maryland currently has just over 20,000 registered electric vehicles. It ranks 12th in the country in EV purchases, according to data from the Alliance of Auto Manufacturers. While Maryland has seen growth in electric vehicle sales, it still lags behind several states with smaller populations, like Colorado, according to Popular Mechanics.

Doley might find a ready market though, since the area also has an electric taxi service in need of chargers, according to WAMU. Takoma Park has just two charging stations — one in a community center and one on a street — that are constantly busy.

“They were fully utilized throughout the day; people were lining up,” Wade said to CNBC. “The city was happy they were being used, but then they said, ‘Wait, no one can get in this parking lot, because these taxis are using these chargers.'”

Not only is RS Automotive now a charging station, but it is also a certified repair facility for any service needs, including disposing of and replacing battery packs, according to CNN.

“This thing is so new, we don’t know what’s going to happen,” Doley said to CNN. “It might flop, or it might work out — we have no clue at all. We’re just crossing our fingers, and in the back of my mind, I know this is something good for the environment.”