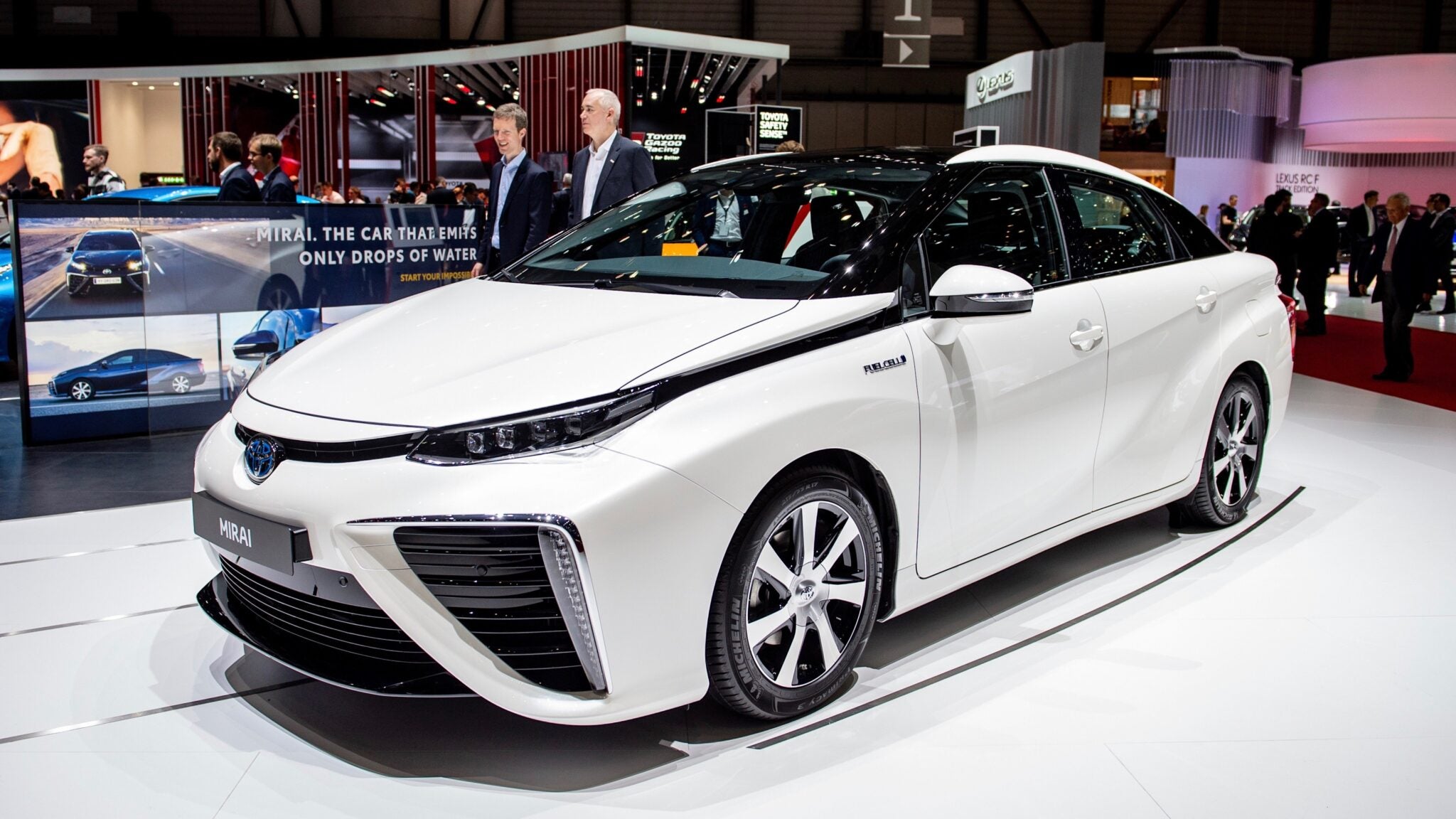 Pop quiz: Is a hydrogen car an electric car?

If you answered (or guessed) yes, you’re correct. Hydrogen fuel cell cars are electric vehicles that generate power through a chemical reaction while they’re being driven, instead of needing to be plugged in to charge.

“From an operational perspective, it’s the same. You have a steering wheel, you have a transmission,” said Tom DeLuise, national commercial and government fleet sales manager for Toyota Motor North America. His company makes a zero-emissions fuel cell EV called the Mirai.

“The difference is the vehicle is running on hydrogen fuel.” So it emits nothing but water from the tailpipe. And yes, people have sipped it. (But why?)

Hydrogen fuel cell electric vehicles, or FCEVs, have been in development for decades but only commercially available since 2016. Toyota, Honda and Hyundai are the only car companies that sell them in the U.S.

Approximately 1,100 have been sold so far in California, according to the Department of Motor Vehicles.

If the very notion of a hydrogen car conjures images of the Hindenburg exploding into flames, that fear is largely unjustified. Yes, hydrogen is flammable. But so is gasoline. The two fuels are roughly comparable in terms of safety.

One advantage of a hydrogen car over a plug-in is that it only takes about five minutes to fill up. However, there are only 40 places to do it in California — at least right now.

And then there’s the cost.

Buying one is about ,000, which is roughly the same as a plug-in electric, but almost double the average price Americans are currently paying for a new vehicle.

Riverside startup StratosShare has a plan to make them more accessible and affordable. You can rent them by the hour, day or week, starting at for 60 minutes — fuel and insurance included. Drivers can use an app to locate, reserve, pay for and unlock a zero-emissions Toyota Mirai.

CE-CERT, the engineering school at the University of California at Riverside, is one of three areas where StratosShare is operating so-called landing zones to pick up and drop off the cars. The other two are in downtown Riverside and at San Bernardino International airport.

All of the locations are in areas the California Environmental Protection Agency has identified as a disadvantaged community, where air quality is poor and incomes are generally lower than in other parts of the state.

StratosShare is operating in the Inland Empire, because it received a grant from the state to provide zero-emission rides for Spanish-speaking communities in the Riverside area.

“We’re trying to make hydrogen fuel cell vehicles accessible to the public for people who otherwise wouldn’t know what a hydrogen car is or have access to one,” said StratosShare co-founder Jonathan Palacios-Avila.

Right now, StratosShare has just 15 Toyota Mirais to share. All of them are located in parts of the Inland Empire with high utilization, according to Palacios-Avila.

The big idea is that instead of hopping into a ride-hail, or renting a gas-powered car from a more traditional rental car agency, there’s another, zero-emissions option to get around.

Shams Tanvir, a postdoctoral scholar at UC Riverside, who researches ways to make environmentally-friendly transportation accessible to the masses, said that car sharing is one way to get the most out of our cars.

Fewer vehicles are needed overall, because “they’re utilizing this car more often. That would create in turn less number of cars on the roads,” Tanvir said.

And ideally, less pollution because hydrogen cars are emissions free. They do not generate the greenhouse gas emissions that contribute to climate change when they are driven.

StratosShare is an offshoot of StratosFuel, a company Palacios Avila co-founded five years ago to produce hydrogen fuel. Next year, that company plans to build a renewable hydrogen plant in the Moreno Valley that can produce enough fuel to power 4,000 hydrogen vehicles a day.

Hydrogen fuel can be produced renewably, using nothing but water, solar and wind.

By making hydrogen fuel more available, renewable and affordable, Palacios-Avila said the costs of owning and operating a hydrogen car will drop to a price that’s more similar to gas.

“The only way is through access — through increased availability,” he said.

Within the next year, he plans to expand StratosShare to 50 cars and bring the service to Los Angeles and Orange County.

This story originally appeared in LAist. It is republished here as part of EcoWatch’s partnership with Covering Climate Now, a global collaboration of more than 250 news outlets to strengthen coverage of the climate story.