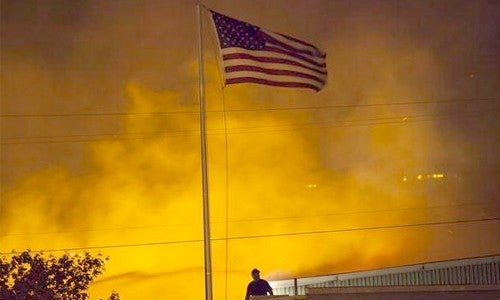 Climate Central, a dedicated team of scientists and journalists researching climate change, has put together an interactive map that shows in real time the active wildfires in the U.S. Each flame icon indicates an active wildfire.

Hover over a given fire to see its name, and if you zoom in you’ll be able to see the outline of the area that’s burning—the so-called fire perimeter. If you click within the perimeter, a window pops up showing the fire’s size in acres, the amount by which the perimeter has grown or shrunk over the past 24 hours, the fraction of the fire that has been contained and other data. There’s also a link to an even more detailed report.

A few months ago, experts predicted that this season would be the worst one yet for wildfires and so far it’s shaping up to be. Alaska, in particular, has seen an astounding number of fires with a record area burned this year. So far this year, fires have burned nearly 5 million acres, an area the size of Connecticut. Climate Central reports that because of climate change, Alaska is entering a new era for wildfires.

And it’s not just Alaska, but the entire West, as evidenced by the map above. Due to high temperatures, record low snowfall and an epic drought, this year is the second-highest for total acreage burned in at least the past 25 years, according to data from the National Interagency Fire Center.

The interactive map is based on data from the Geospatial Multi-Agency Coordination Group. The information is updated daily from reports by fire managers on the scene, satellite imagery and GPS data, among other sources.