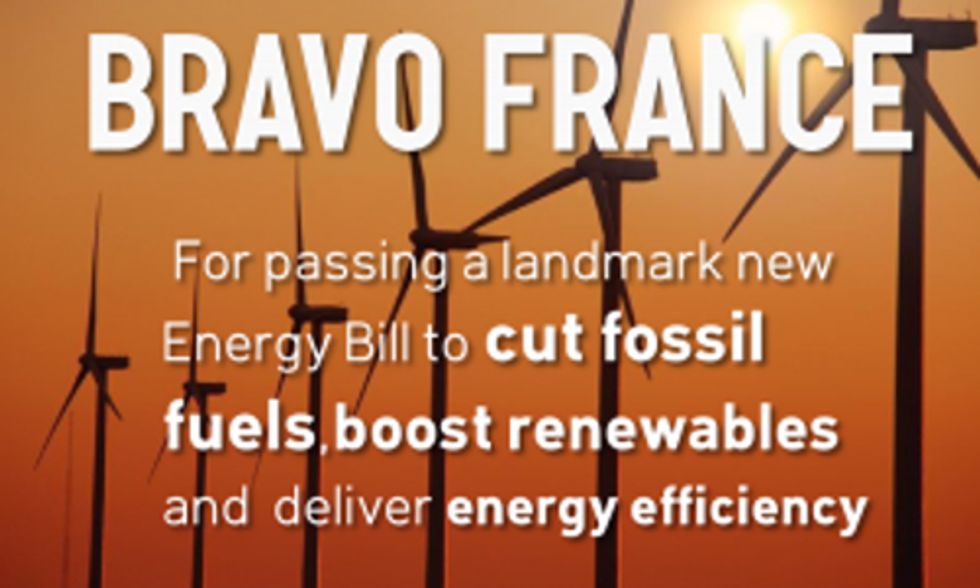 The French government has approved its long-awaited energy bill, clearing the way for it to go before Parliament this autumn and be ratified in 2015. This is a major step for the nation that will be hosting the 2015 UN climate summit, where a new global climate deal is expected to be agreed.

The French bill includes targets to cut fossil fuel and nuclear energy use and boost renewables, and could help mobilize €10 billion of investment and create thousands of jobs, according to the government. France joins a host of other EU nations and major economies in announcing such legislation. While the ambitious targets have been welcomed by NGOs, they warn that the government must now “provide the impetus” and mobilize even more financing to ensure the ambitious targets are implemented. Others have pointed out that nuclear energy remains a lynchpin of France’s energy policy.

With the new energy bill, France joins the ranks of other nations taking strong climate action and committing targets to law. In Europe in recent months Denmark has ratified its climate law, while Finland revealed its proposed legislation to cut emissions by 80 percent by 2050. The UK government also recently stood by its targets to cut emissions under its climate change act, while across the world other major economies have pledged strong climate action, including a recent announcement from the U.S. to cut carbon pollution from power plants.

France’s national targets go some way to showing “its own climate and energy house is in order” and paving the way for ambitious international commitments on climate change. Hosts of the UN’s 2015 climate summit, all eyes will now be on France to see if it can “play the role of fair and ambitious COP president” and broker a strong global climate treaty.

The country’s first opportunity to show leadership will be when EU nations meet to finalize the bloc’s climate and energy framework to 2030 in October. France’s emissions target puts it firmly in line with the 40 percent reduction proposed by the EU Commission, while its ambitious renewable goal goes beyond the EU-wide proposal.