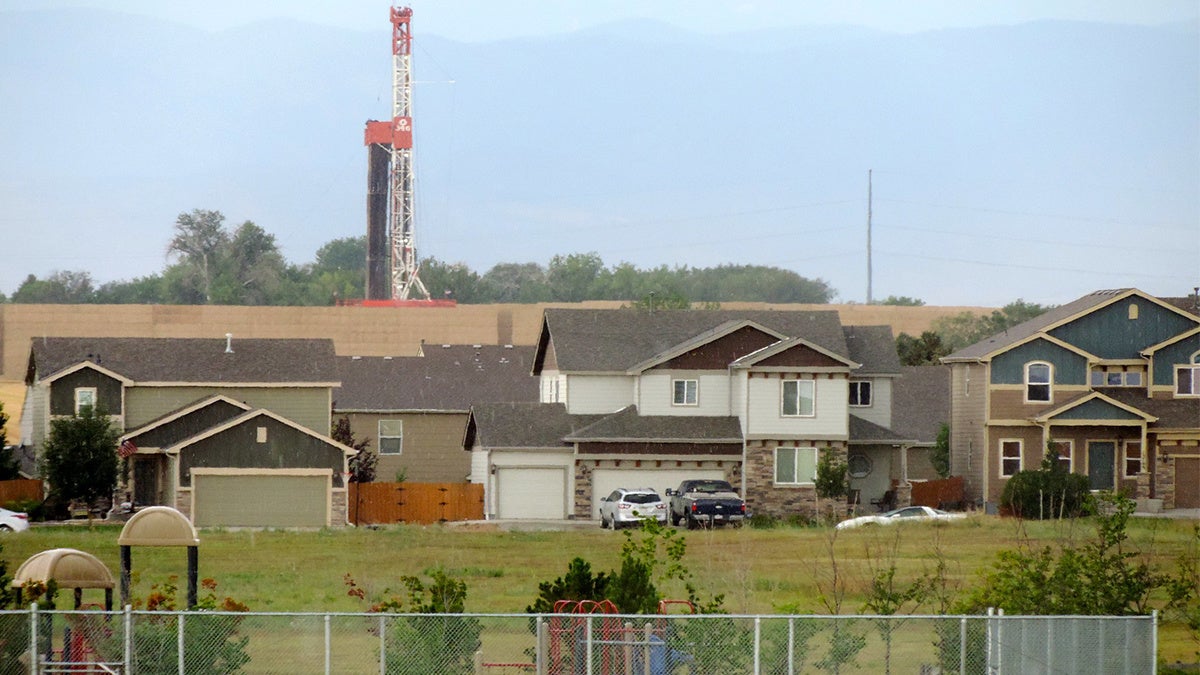 A fracking well looms over a residential area of Liberty, Colorado on Aug. 19. WildEarth Guardians / Flickr

A new multiyear study found that people living or working within 2,000 feet, or nearly half a mile, of a hydraulic fracturing (fracking) drill site may be at a heightened risk of exposure to benzene and other toxic chemicals, according to research released Thursday by the Colorado Department of Public Health and Environment (CDPHE)

The study concluded that people living within almost a half-mile radius of a fracking well have an increased risk of feeling the effects of chemical exposure though headaches, nausea, dizziness, nosebleeds and respiratory trouble, according to The Denver Post.

Until now, Colorado has had a 500-foot minimum distance that drilling wells can be from homes. The study found that, in certain conditions, toxic chemicals like benzene, toluene and ethyltoluenes could be up to 10 times the recommended levels at a 500-foot distance. As you move away from the fracking site, the chemicals dissipate, but could still be at unsafe levels at 2,000 feet away, as Newsweek reported.

That takes into account only the chemicals that are known. Some chemicals used in the hydraulic fracturing process are trade secrets. As Newsweek reported, a recent study from the Partnership for Policy Integrity noted that natural gas drillers use a law that allows some of their chemicals to remain secretive.

“Secret exposure to chemicals that our own EPA reports as a potential hazard to human health is unconscionable,” said Alan Lockwood, MD, of Physicians for Social Responsibility (PSR) to Newsweek. “Healthcare professionals can’t possibly treat patients properly, make protective public health plans and decisions, and protect first responders without knowing what chemicals are in the environment.”

The CDPHE report strengthens Governor Jared Polis’ argument that emissions from Colorado’s powerful oil and gas industry need to be reined in. The finding also helps explain the complaints 750 residents living near oil and gas facilities made to the state’s health department, said state toxicologist Kristy Richardson, as The Denver Post reported. Around 60 percent of those complaints involved symptoms commensurate with chemical exposure, such as headaches, dizziness and difficulty breathing.

Computer modeling from the study is expected to help regulators set new standards for the minimum distance a drilling site can be from a home.

“This study is the first of its kind because it used actual emissions data to model potential exposure and health risks,” said CDPHE environmental programs director John Putnam, according to The Denver Post. “While we pursue further research, we won’t delay enacting stricter emissions standards for chemicals that cause human effects, ozone pollution and climate change. This study reinforces what we already know: We need to minimize emissions from oil and gas sources.”

State regulators insisted they would start to take a close look at all new applications for drilling within 2,000 feet of any residence and that they would start testing air emissions around industry wells. The Colorado Oil and Gas Conservation Commission said it would start to use its money to test air quality around homes near gas wells, according to The Denver Post.

Community activists praised the findings and insisted that state lawmakers need to prioritize community health and rein in oil and gas industry pollution.

“Dozens of children living in close proximity to oil and gas have already documented off-the-charts levels of benzene in their blood,” said Colorado Rising spokeswoman Anne Lee Foster, as The Denver Post reported. “Considering this and the corroborative data of the study, the state must pause oil and gas permitting and ensure that public health and safety is protected — as new legislation mandates.”