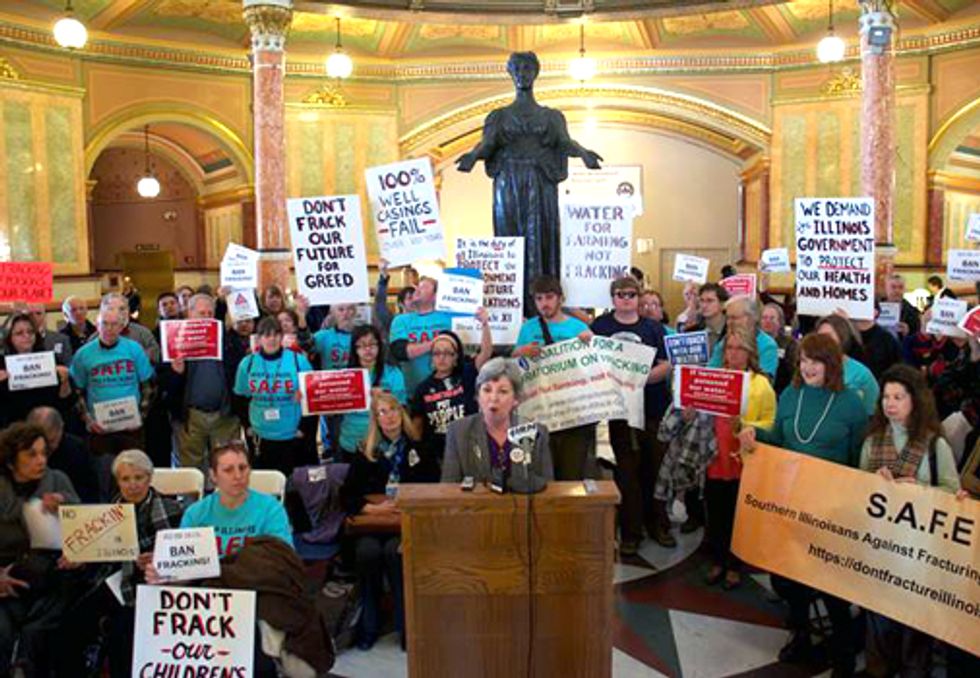 On March 13, one day after nearly a hundred concerned citizens converged on Springfield, Illinois to call for a moratorium on fracking, House Speaker Mike Madigan announced his support for legislation to stop the dirty drilling technique in Illinois.

HB 3086 in the House (sponsored by Rep. Deb Mell) and SB 1418 (sponsored by Sen. Mattie Hunter) each call for a moratorium on fracking in Illinois, and are scheduled for committee hearings in Springfield.

“In state after state, fracking has been a rolling environmental disaster—contaminating drinking water, making nearby residents sick and turning rural landscapes into industrial zones,” said Bruce Ratain, state policy associate for Environment Illinois. “We praise Speaker Madigan for looking carefully at the facts about fracking, and joining the growing call to keep it out of Illinois.”

Liz Patula, a member of Southern Illinoisans Against Fracturing Our Environment (SAFE), had the following response: "I said it yesterday in the Capitol and I will say it again today: New York’s Assembly just voted to extend its moratorium on fracking. Don't the citizens of Illinois deserve the same protection?"

While in Springfield, activists also held a rally and press conference in the Capitol rotunda, and delivered materials or met with every legislator in the House and Senate.

"Today Speaker Madigan has shown the kind of wise leadership that we went to Springfield yesterday to see,” said Dr. Lora Chamberlain, of the Illinois Coalition for a Moratorium on Fracking (ICMF). “ICMF, SAFE, Illinois People's Action and Environment Illinois went yesterday, with over 100 Illinois citizens, to ask our Illinois lawmakers to do exactly what the Speaker did today. Keep Illinois SAFE by supporting a moratorium on fracking and slowing down fracking. We thank Sen. Hunter and Rep. Mell for their leadership, and applaud Speaker Madigan for listening to the concerned citizens of Illinois.”

The toll of fracking has been extensively documented by Environment Illinois’ sister organization in Pennsylvania, where gas drilling has run rampant. The groups’ report In the Shadow of the Marcellus Boom documents leaks, spills, well blowouts, and other pollution from gas drilling operations. Residents living on the frontlines of fracking have told their stories in Penn Environment’s Marcellus Shale Stories video.

Moreover, a forthcoming study from University of Colorado School of Public Health concludes that living within a half a mile of gas drilling operations is associated with a wide range of serious health risks.

Speaker Madigan’s announcement comes as other state legislatures are also moving to halt or restrict fracking. New York’s Assembly approved a fracking moratorium last week, and new anti-fracking measures have been introduced in other states this year as well.

“For Illinois’ water, air and land, the best protection against fracking is no fracking at all, and we are excited to have Speaker Madigan stand with us,” said Ratain. “Now it’s time for legislators to follow the leadership of Speaker Madigan, Sen. Hunter and Rep. Mell and pass legislation to keep Illinois free from fracking.”