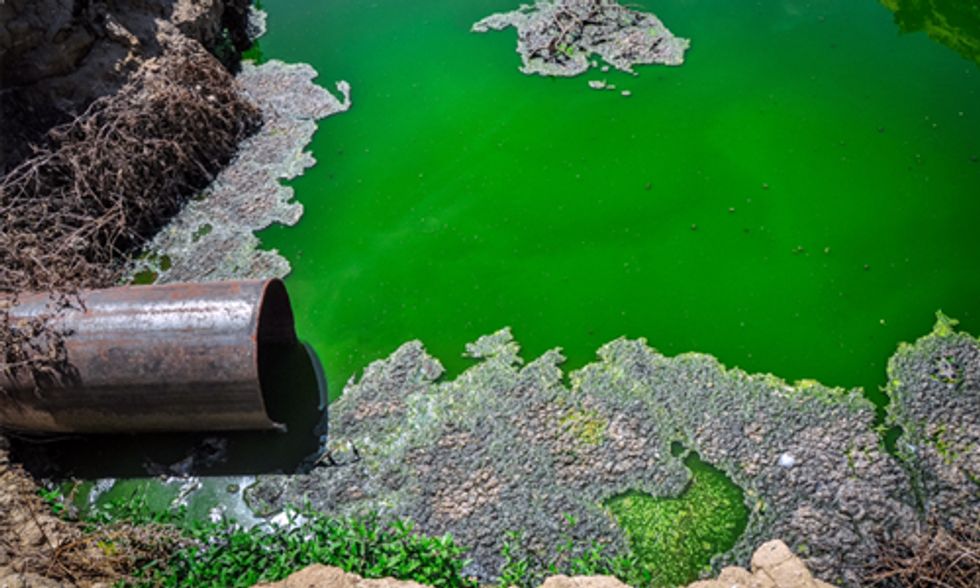 California is in the middle of an epic water shortage, with nearly 80 percent  of the state experiencing “extreme or exceptional” drought conditions. Check out this animated map to get a sense of how extensively the drought has impacted the Golden State.

Things have gotten so bad that California enlisted Lady Gaga to record a public service announcement.

Given the situation, anti-fracking activists say it’s time for Governor Jerry Brown to put a stop to water-intensive fracking, claiming that the controversial oil and gas production method is exacerbating the problem.

“We’re talking about a triple threat to our water from fracking,” says Adam Scow, the California director for Food & Water Watch.

The first threat: The fracking process requires a lot of water, which then becomes unsuitable for any other use.

While it’s true that fracking in California doesn’t require as much water as it does in Texas and Pennsylvania, Scow contends that any amount lost to fracking is unacceptable: “In the middle of the worst drought in 50 years, they’re taking 140,000 to 150,000 gallons of water out of the water cycle per frack job. They’re destroying that amount of water on a daily basis.”

It’s also possible that fracking fluid could leach into underground aquifers, and of course the toxic wastewater left over from fracking has to be disposed of somehow—and therein lies the second threat to California’s water supply.

The California Department of Gas and Geothermal Resources (known asDOGGR) recently ordered 11 fracked wells shut down over fears that they were contaminating potential sources of potable water. As many as 100 other fracking sites are under review, as well.

An unlined pit of unknown neon green fluid leading to a fracking injection well. This pit is in the middle of almond fields and chicken coops. Photo credit: Brooke Anderson

The third threat to California’s water supply, according to Scow, is that all of the oil and gas we’ve produced via fracking will eventually get burned and thus contribute to global warming, “which leads to more droughts.”

A study published by Utah State University researchers earlier this year bolsters his claim. It concluded that natural variation alone couldn’t account for the severity of California’s drought, and that climate change has in fact made it worse.

Residents of California’s Central Valley region already suffer from a variety of health problems associated with oil drilling, including nausea, headaches, nosebleeds, and rare cancers, as well as a series of respiratory and cardiovascular problems.

Fracking wells in the middle of potato fields. An active flare can be seen in the distance. This flare has been seen at 50 feet high and is on 24 hours a day. Kern County, CA. Photo credit: Brooke Anderson

“Even before fracking, the area had the worst air and water pollution in California,” says Madeline Stano, a staff attorney with the Center on Race, Poverty & the Environment. “With fracking, the pollution and the economy are getting worse.”

No major studies have been done on how fracking effects water quality and human health, making it hard to quantify just how big of an impact it has had. But the toll it's taking on the economy is becoming all too clear.

The Central Valley is a major agricultural zone as well as ground zero for oil production in the Golden State. Some 616 of 621 reported fracking sites are in the region, where the drought has already claimed 17,000 agricultural jobs, according to a study by UC Davis. Every drop of water used for fracking is permanently unavailable for agricultural use, which will only make the situation worse for Central Valley residents.

To add insult to injury, close proximity to fracking sites dramatically decreases property values. “The oil industry and the governor consistently claim fracking is good for the Valley and its economy,” Stano says. “But the reality is the opposite.”

Activists say it’s time for California Governor Jerry Brown to step in and issue a moratorium on fracking in order to protect the health and wellbeing of Californians and all Americans.

“The only state that’s going to do anything about fracking and climate is California, and we haven’t done anything about it,” says Linda Capato, fracking campaign coordinator for 350.org. “The governor has a pretty good record on the environment, but that doesn’t mean anything if he continues to allow fracking.”