Fracking Infrastructure Protestors Have Their Day in Court 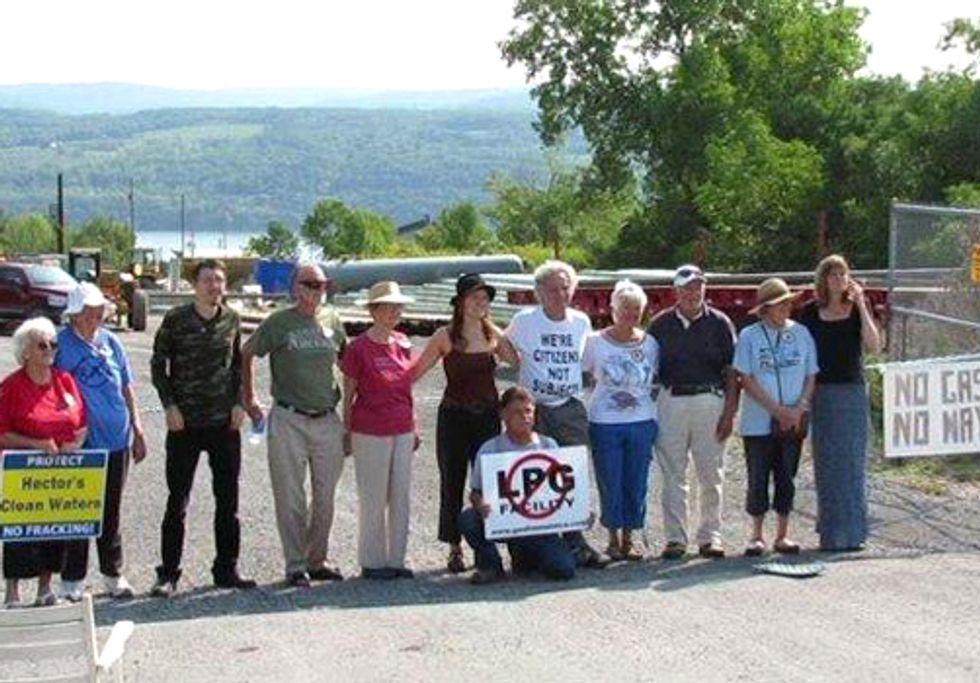 One of the arrestees, Reverend Gary Judson, a 72-year-old retired Methodist minister, was fined $275, which was quickly paid by the public at large in the room. Jeremy Alderson of Hector, 63, was advised by the judge to consult with a lawyer, and his arraignment was moved to Oct. 17. Susan Walker, age 53 from Dundee, refused in protest to pay a fine of $275 and was sentenced to the maximum 15 days in jail.

The three citizens had been arrested and charged with trespassing Sept. 6 while blocking an entrance to the Seneca Lake Compressor Station, which is part of Inergy’s reckless and dangerous expansion of fracking infrastructure that is intended to become a gas storage and transportation hub for the Northeast. Their direct action protest was part of a larger rally aimed at protesting and raising awareness about Inergy’s dangerous plans.

Citizens have gone through a long process with countless appeals to the New York Department of Environmental Conservation (DEC) and state government detailing why Inergy's plans are out of line with the best interests of the community and how Inergy poses a terrible threat to the health and well being of the tourist community as well as to Seneca Lake. According to protesters, Inergy has already started digging and drilling even before its environmental impact statement is finalized and permits are granted. The protest is a last resort measure by citizens who have tried all means of having their concerns heard.

Reverend Judson noted that in the last few months alone, two brine (toxic fracking fluid) spills at the Inergy facility have been reported to the DEC, one with 1745 gallons and the other with some 15,000 gallons. The DEC is currently investigating the spills.

Reverend Judson, who paid a $275 fine, said, "Throughout history people have risen up in acts of civil disobedience to protest against unjust laws, corrupt and oppressive governments, and corporations who care little for the local community, endangering their citizens and polluting their environment. Such is the case, I believe, with Inergy’s planned expansion of the gas storage facility in Schulyer County.”

Since the proposed expansion, the Seneca Lake community has organized major opposition to the plant that includes the support of thousands of citizens and well over a hundred businesses. Inergy's plans threaten the lake by repurposing depleted salt caverns on the west shore for the storage of liquefied petroleum gases and liquified natural gases. Inergy plans to drill into the caverns and construct additional brine pits on the hillside above the lake. There have already been accidents and spills.

When he was arrested, Reverend Judson said, “They don’t have the right to do this—to put the lake in jeopardy.  There is too much at stake.  We all stand to lose.  We’ll all end up paying for their mess.”

When Jeremy Alderson was arrested, he said, “The Inergy project is clearly meant to facilitate the fracking of New York, Ohio and Pennsylvania. We adamantly oppose fracking and consider it catastrophic folly. We want the Inergy project stopped because of its own lack of merit, and also as part of the larger effort to stop fracking.”

Gas Free Seneca was formed in early 2011 in response to Inergy, LP’s plan to “build an integrated gas storage and transportation hub in the Northeast,” according to its press announcement, at the U.S. Salt plant just North of Watkins Glen, NY. Gas Free Seneca started out as a small group of concerned citizens trying to spread the word about the proposed LPG storage facility. Since its inception, Gas Free Seneca has grown into a coalition of many concerned citizens, local business owners and regional environmental groups. It is the aim of Gas Free Seneca to protect Seneca Lake, its environs and local home-grown businesses from the threat of massive industrialization.