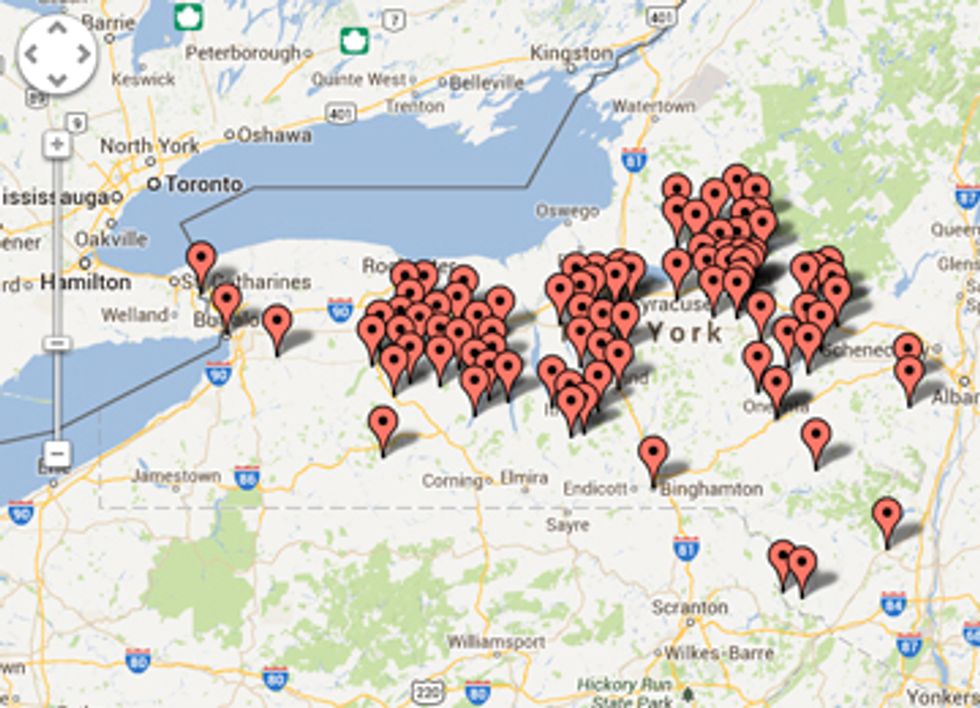 Proponents of hydraulic fracturing have asked New York’s top court to decide whether local governments can ban gas drilling, but whether the court agrees to take the case is far from certain. Attorneys for Norse Energy and an Otsego County farmer made the filing late Friday, asking the seven-member Court of Appeals to take on the cases of a pair of upstate towns that changed their zoning laws in 2011 to ban hydrofracking and gas drilling.

Google Map of New York communities that have either banned or declared a fracking moratorium. Source:
New Yorkers Against Fracking

Since a mid-level appeals court ruled unanimously last month in favor of upholding the bans, however, there’s no requirement that the top court must hear the case.

The cases—involving the towns of Dryden in Tompkins County and Middlefield in Otsego County—are expected to set a precedent statewide and have been closely watched by fracking supporters and opponents. More than 150 municipalities have passed a ban or moratorium on gas drilling or fracking, according to FracTracker, a website tracking the issue.

“We hope that the New York Court of Appeals recognizes the importance of this issue and grants leave to appeal to provide definitive guidance concerning this important issue of statewide significance,” said Tom West, an Albany-based attorney representing Norse, which inherited the lawsuit from Anschutz Exploration Corp. after the company declined to pursue an appeal.

Attorneys for Norse and Jennifer Huntington, owner of a dairy farm in Middlefield, contend that a provision in state oil-and-gas law—which prohibits localities from regulating the industry, except for when it comes to local roads—also prevents local governments from enacting drilling bans. The lower courts, however, have sided with the municipalities, citing a previous court decision regarding sand and gravel mining that allowed a ban to stand.

“Our client, the Town of Dryden, is prepared to continue fighting to preserve its way of life from the consequences of oil and gas development,” said Deborah Goldberg, managing attorney of Earthjustice, a nonprofit law group representing Dryden. “And we’ll fight alongside them until this matter is resolved once and for all.”

The court usually takes several weeks to decide on whether to accept a motion to appeal.

High-volume hydrofracking is on hold in New York as Gov. Andrew Cuomo’s administration completes various levels of review. State Health Commissioner Nirav Shah has given no recent timeline for his work to be completed.