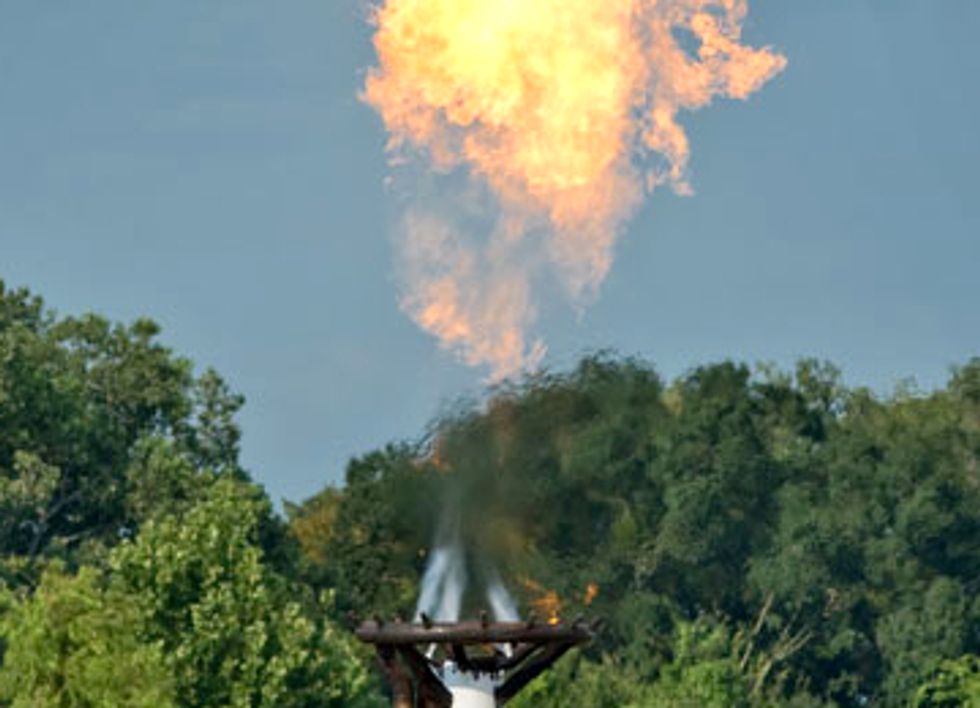 British Columbia (B.C.) appears to be pinning its economic hopes on natural gas—much of it obtained by fracking. While the world should be turning from fossil fuels to cleaner energy and conservation, we’re poised to dig ourselves deeper into the climate-altering carbon hole.

Taking a cue from the liquidation-sale policies of the Alberta and federal governments, B.C.’s leaders want to get fossil fuels out of the ground, piped to the coast, liquefied and shipped to Asia—or wherever they can find buyers—as quickly as possible. It’s a short-sighted plan based on outmoded thinking. In the long run, it’s not good for the economy or the environment.

Whether politicians believe fossil fuel supplies are endless or can only see as far as the next election, they’re selling out our future and leaving a shattered legacy for our kids and grandkids. To start, natural gas is not the clean-energy solution it’s touted to be. According to the Pembina Institute, if only five of the 12 proposed liquefied natural gas (LNG) terminals were built on the B.C. coast, they could spew 63 million tons of carbon a year into the atmosphere—exceeding the amount now produced by the Alberta tar sands and equal to all of B.C.'s greenhouse gas emissions in 2010. Discharged particle matter and volatile organic compounds would also be significant new sources of pollution.

Liquefying the gas for export, which requires enormous amounts of energy, isn’t the only source of greenhouse gases. Leaks–or what the industry refers to as “fugitive emissions”–during drilling, extraction and transport are also concerns. Although the B.C. Environment Ministry claims just .3 to .4 percent of gas escapes into the atmosphere, independent studies say it’s likely many times that amount.

According to an article in Nature, scientists from the U.S. National Oceanic and Atmospheric Administration and the University of Colorado in Boulder found leaks of methane—a greenhouse gas 20 times more potent than carbon dioxide—amounted to between four and nine percent of total production at two gas fields in the U.S.

Even the economic benefits of the province’s LNG plans are suspect. Many analysts expect price corrections, and LNG expert Peter Hughes told the Canadian Broadcasting Corporation the perceived windfall is “wishful thinking” because B.C. will have to compete with producers in places like Qatar, East Africa and Australia. Most of the money wouldn’t even stay in B.C., as many gas companies are from other provinces and countries. As for jobs, natural gas extraction, transport and production create relatively few compared to almost every other economic sector–including tourism, science and technology, health care, education and small business.

On top of that, fracking—shooting water, sand and chemicals at high pressure into the ground to shatter shale and release natural gas—has many other environmental consequences. It requires massive amounts of water, contaminates drinking water, damages habitat and ecosystems—even causes small earthquakes!

As well as seeing natural gas as an economic panacea, some argue it could be a “bridging fuel"–something cleaner than oil or coal to use while we make the transition to renewable energy. But it’s a hazard-strewn bridge, and subsidizing and investing in natural gas extraction and infrastructure without any real commitment to wean us off oil, coal and gas will only keep us on the fossil fuel road and discourage investment in clean energy and conservation.

The industry also relies on taxpayers’ money to subsidize it, through tax and royalty credits, and to provide water, roads and the massive amounts of energy required to liquefy the gas. And fugitive emissions from gas operations are exempt from the carbon tax. If we are really “bridging” to reduce fossil fuels, why are we subsidizing companies for their carbon costs?

It’s time to invest our money and human resources in long-term, innovative ideas that will create good, lasting jobs and ensure that we and our children and grandchildren continue to enjoy healthy and prosperous lives and that our spectacular “supernatural" environment is protected. We have abundant renewable resources and opportunities to conserve energy and lead the way in developing clean energy. It’s time to move forward.

Visit EcoWatch’s LNG and FRACKING and pages for more related news on this topic.