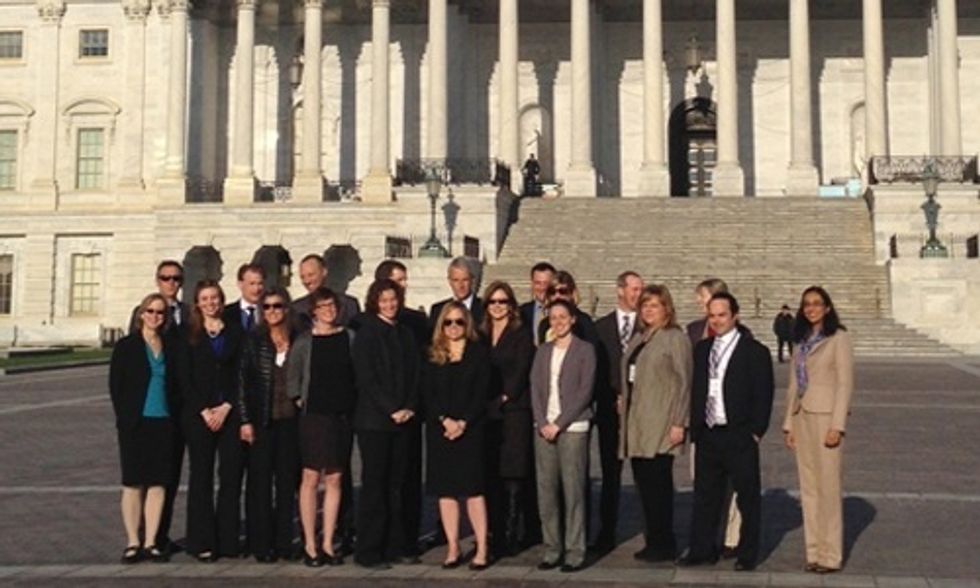 All laudable initiatives, but with the clock ticking on our ability to limit global temperature increases to 2 degrees Celsius to avoid catastrophic climate change, companies need to up their game.

Ceres staff and representatives of Fortune 500 companies who signed on to the Climate Declaration in front of the Capitol Building. Photo credit: Ceres

The companies have traveled to Washington because they believe that reaching a strong global deal on climate change in Paris this December is critical for the long-term stability of their businesses and the overall economy. They also recognize the imperative of U.S. leadership on climate change, which is why most of them signed a letter—along with more than 200 other companies—supporting EPA’s Clean Power Plan, a cornerstone of U.S. efforts to reduce carbon emissions.

Many are already experiencing climate change impacts in their direct operations and supply chains—the devastating drought in the nation’s food hub, California, being just one example.

They’re also "walking the talk" on climate change by sourcing more renewable energy for their operations and creating innovative new services and products that reduce carbon pollution. But they can only go so far without strong policies.

“Nestle’s is directly impacted by the effects of climate change. Of particular concern are changes to weather patterns, water availability and agricultural productivity that will affect our global supply chain . We support the EPA Clean Power Plan because it provides a stable policy framework that creates a level playing field and provides incentives to guide behavior to tackle climate change.” Tim Brown, President and Chief Executive Officer, Nestlé Waters North America

“Producing innovative technologies in advanced low carbon aluminum products … is a key source of competitive advantage for our company and our customers. We strongly support the principles behind the carbon standard for existing power plants. Unless and until we commit to a low carbon future, the U.S. is not going to see the reductions we need to maintain healthy and sustainable economic growth.“ John Gardner, Vice President and Chief Sustainability Officer, Novelis, a global manufacturer of rolled aluminum, with manufacturing plants in Georgia, Indiana, Kentucky, New York, Ohio and West Virginia.

“As a nation we must take action to reduce carbon and mitigate the increase in temperature that carbon causes, and the EPA plan has our support. Like many companies, we are following the lead of our consumers [who are] demanding transparency and environmental responsibility from the brands they purchase. There is very strong support within our community for the EPA Clean Power Plan.” Donna Carpenter, President and Founder of Burton Snowboards in Vermont, who calls the winter sports industry “the canary in the coal mine of climate change.”

These Clean Power Plan supporters don’t buy opponents’ ‘sky is falling’ claims that the reliability of our electric power system is at risk. Studies by the Analysis Group have repeatedly shown that electric power providers are capable of meeting the EPA requirements while keeping our lights on—just as they have met every other Clean Air Act requirement over the past 25 years.

Indeed, many of the nation’s largest power companies have indicated in comments to the EPA that the rule is achievable with some modifications. Listen, for example, to Tom King, former president of National Grid:

As the Analysis Group concludes,“In the end, because there are such fundamental shifts already underway in the electric industry, inaction is the real threat to good reliability planning.” In states like Hawaii, for example, the local utility’s failure to adapt to the rapid spread of rooftop solar is creating electric system problems.

More than ever, it’s clear that businesses and investors have accepted the science of climate change and want government leadership to deal with it. Among the signs of this growing support:

It’s time for our elected officials to follow their cue and recognize the urgency and economic imperative of tackling climate change.