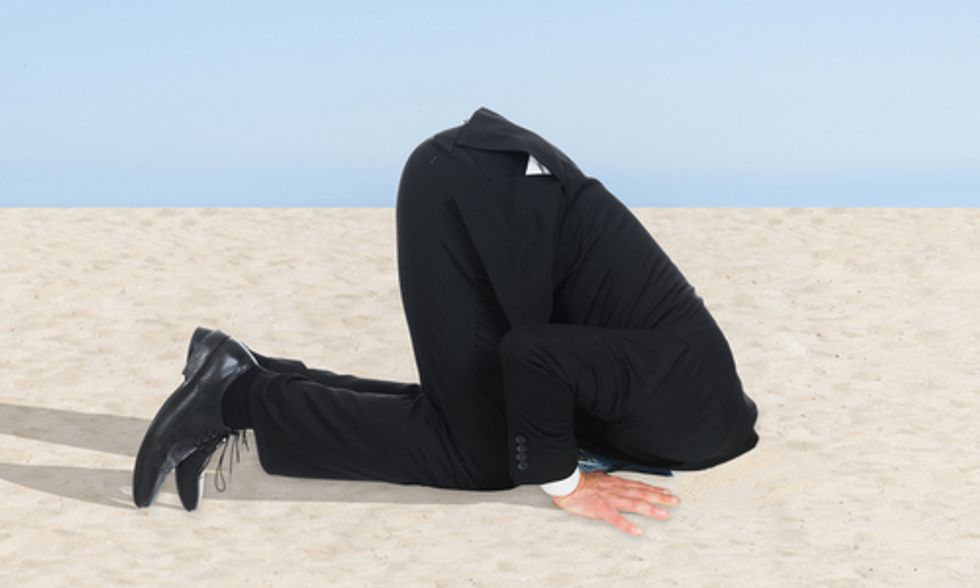 The state of Florida is the region most susceptible to the effects of global warming in this country, according to scientists. Sea-level rise alone threatens 30 percent of the state’s beaches over the next 85 years.

But you would not know that by talking to officials at the Florida Department of Environmental Protection (DEP), the state agency on the front lines of studying and planning for these changes.

Many in Florida are wondering if Gov. Rick Scott will ever come up for air.
Photo credit: Shutterstock

DEP officials have been ordered not to use the term “climate change” or “global warming” in any official communications, emails or reports, according to former DEP employees, consultants, volunteers and records obtained by the Florida Center for Investigative Reporting.

The policy goes beyond semantics and has affected reports, educational efforts and public policy in a department that has about 3,200 employees and $1.4 billion budget.

Kristina Trotta, another former DEP employee who worked in Miami, said her supervisor told her not to use the terms “climate change” and “global warming” in a 2014 staff meeting.

“We were told that we were not allowed to discuss anything that was not a true fact,” she said.

This unwritten policy went into effect after Gov. Rick Scott took office in 2011 and appointed Herschel Vinyard Jr. as the DEP’s director, according to former DEP employees. Gov. Scott, who won a second term in November, has repeatedly said he is not convinced that climate change is caused by human activity, despite scientific evidence to the contrary. Vinyard has since resigned. Neither he nor his successor, Scott Steverson, would comment for this report.

“DEP does not have a policy on this,” the department’s press secretary, Tiffany Cowie, wrote in an email. She declined to respond to three other emails requesting more information.

Jeri Bustamante, a spokesperson with the governor’s office, wrote in an email that “There’s no policy on this.”

But four former DEP employees from offices around the states say the order was well known and distributed verbally statewide.

One former DEP employee who worked in Tallahassee during Scott’s first term in office, and asked not to be identified because of an ongoing business relationship with the department, said staffers were warned that using the terms in reports would bring unwanted attention to their projects.

“We were dealing with the effects and economic impact of climate change, and yet we can’t reference it,” the former employee said.

Former DEP attorney Byrd said it was clear to him this was more than just semantics.

“It’s an indication that the political leadership in the state of Florida is not willing to address these issues and face the music when it comes to the challenges that climate change presents,” Byrd said.

Climate change and global warming refer to the body of scientific evidence showing that the Earth’s environment is warming due to human activity including the burning of fossil fuels and deforestation. It is accepted science all over the world.

The Intergovernmental Panel on Climate Change, established by the United Nations, wrote in a 2014 report for world policy makers: “Human influence on the climate system is clear, and recent anthropogenic emissions of greenhouse gases are the highest in history. Recent climate changes have had widespread impacts on human and natural systems.” The report’s authors were scientists from 27 countries.

Still, many conservative U.S. politicians say the science is not conclusive and refuse to work on legislation addressing climate change. This type of legislation, such as a carbon tax or policies to encourage more sustainable energy sources, could be costly to established industry.

In response, a group of Florida scientists requested to meet with Scott and explain the science behind the phenomenon. Scott agreed. The scientists were given 30 minutes.

“He actually, as we were warned, spent ten minutes doing silly things like prolonged introductions,” geologist and University of Miami professor Harold Wanless recalled. “But we had our 20 to 21 minutes, and he said thank you and went on to his more urgent matters, such as answering his telephone calls and so on. There were no questions of substance ”

Scott’s predecessor, Charlie Crist, had been proactive on climate change, forming a statewide task force and convening a national summit in Miami in 2007. But evidence the issue has fallen out of favor during the Scott administration is apparent.

One example is the Florida Oceans and Coastal Council’s Annual Research Plan, put together by DEP and other state agencies. The 2009-2010 report, published the year before Scott was elected, contains 15 references to climate change, including a section titled “Research Priorities—Climate Change.”

In the 2014-15 edition of the report, climate change is only mentioned if it is in the title of a past report or conference. There is one standalone reference to the issue at the end of a sentence that sources say must have slipped by the censors. “It’s a distinct possibility,” said one former DEP employee.

Orders From the Top

Christopher Byrd said that he was warned not to use “climate change” and related terms during a 2011 staff meeting shortly after Gov. Scott appointed Vinyard as DEP director.

“Deputy General Counsel Larry Morgan was giving us a briefing on what to expect with the new secretary,” Byrd recalled. Morgan gave them “a warning to beware of the words global warming, climate change and sea-level rise, and advised us not to use those words in particular.”

Added Byrd: “I did infer from this meeting that this was a new policy, that these words were to be prohibited for use from official DEP policy-making with our clients.”

Morgan did not respond to a request for comment.

DEP dismissed Byrd in 2013. His termination letter states: “We thank you for your service to the State of Florida; however, we believe the objectives of the office will be accomplished more effectively by removing you from your position.” Byrd, now in private practice as an environmental lawyer in Orlando, said he was fired because he repeatedly complained the DEP was not enforcing laws to protect the environment.

Although he disagreed with the policy, Byrd said he nonetheless passed the warning down to the various offices he worked with, including the Coral Reef Conservation Program at the Biscayne Bay Environmental Center in Miami.

“As you can imagine with the state of coral reef protection,” Byrd said, “sustainability, sea-level rise, and climate change itself were words we used quite often.”

The Coral Reef Conservation Program is where Jim Harper, a nature writer in Miami, was working as a consultant in 2013. He had a contract to write a series of educational fact sheets about how to protect the coral reefs north of Miami. Climate change was one of the issues Harper and his partner on the project, Annie Reisewitz, wanted to address.

“We were told not to use the term climate change,” Harper said. “The employees were so skittish they wouldn’t even talk about it.”

Reisewitz confirmed Harper’s story. “When we put climate change into the document, they told us they weren’t using the term climate change,” she said.

Harper and Reisewitz completed the assignment as instructed.

A year later, in November 2014, the Coral Reef Conservation Program held a meeting to train volunteers to use a PowerPoint presentation about the threats coral reefs faced. Harper attended the meeting, held at DEP’s Biscayne Bay office in Miami. Doug Young, president of the South Florida Audubon Society and a member of the Broward County Climate Change Task Force, also attended.

Two DEP employees, Ana Zangroniz and Kristina Trotta, showed the presentation to the volunteers and then asked if anyone had a question.

He continued: “The two young women, really good people, said, ‘We are not allowed to show the words, or show any slides that depicted anything related to climate change.’ ”

Young and Harper said they could not participate if climate change was not mentioned. “The women kept saying, ‘Work with us; we know you are frustrated,’” Harper said.

On Nov. 19, 2014, the DEP’s Zangroniz wrote Harper and Young an email stating she had talked to her manager about their concerns.

“Unfortunately at this time,” she wrote, “we can’t make any alterations or additions to the presentation. … If you do choose to continue as a volunteer, we would have to request that you present the information as is. If you choose to add in an additional presentation or speaker that addresses climate change and coral reefs, there would have to be a very clear split between the two.”

Trotta left her position as a field and administrative assistant in January. She told FCIR that when it came to scrubbing the term “climate change” from projects, she was following orders. Those orders came from Regional Administrator Joanna Walczak during a staff meeting in the summer of 2014.

“We were instructed by our regional administrator that we were no longer allowed to use the terms ‘global warming’ or ‘climate change’ or even ‘sea-level rise,’” said Trotta. “Sea-level rise was to be referred to as ‘nuisance flooding.’”

The order pained her, said Trotta, who has a master’s degree in marine biology, because she believes climate change is an imminent threat to Florida.

While state officials are still not using the terms ‘climate change’ and ‘global warming,’ any prohibition of the term “sea-level rise” seems to have ended. In a February press conference, Scott unveiled $106 million in his proposed budget to deal with the effects of rising oceans. But $50 million of that is for a sewage plant in the Keys, and $25 million is for beach restoration, which critics say is hardly a comprehensive plan to protect homes, roads and infrastructure.

Wanless, the University of Miami professor, said the state government needs to acknowledge climate change as settled science and as a threat to people and property in Florida.

“You have to start real planning, and I’ve seen absolutely none of that from the current governor,” he said.

Meet the ‘Merchants of Doubt': Spin Doctors Obscuring the Truth on Climate Change