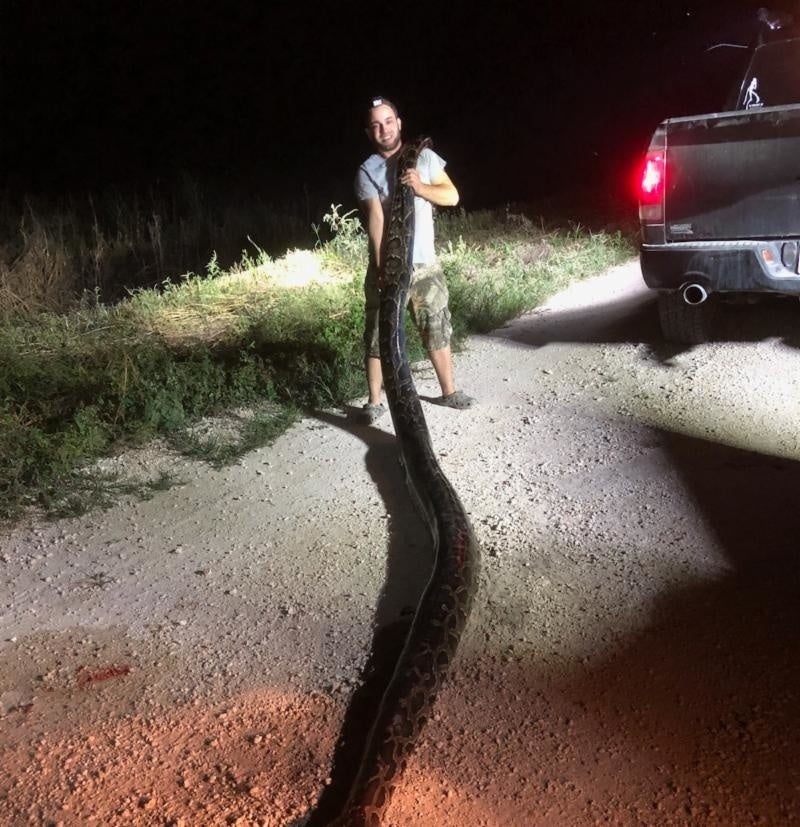 Earlier this week, a Florida man caught and killed a 17-foot, 5-inch female Burmese python in the Miami-Dade County
Everglades.

The South Florida Water Management District (SFWMD)
praised Homestead-based hunter Kyle Penniston’s record-setting catch for its Python Elimination Program. Weighing 120 pounds, she was certainly a big one and she even bit Penniston’s hand before she was shot on Monday night, according to his Facebook post.

This is certainly not an attack on Penniston or SFWMD, but one can’t help but feel bad for the gargantuan reptile as well as the 1,859 other snakes that hunters have “eliminated” on behalf of the program. Yes, they may look scary. Yes, they may pose a threat to humans. After all, these apex predators are swallowing up native wildlife including birds, rabbits, alligators and even deer. However, it’s not the fault of these snakes that they are there.

Burmese pythons, which are native to India, southeast Asia and the East Indies, should not be in Florida. But due to the exotic pet trade—as well as people who are unequipped to care for a carnivorous constrictor that can grow
20 feet in length and have a girth as big as a telephone pole—they’ve become an unfortunate invasive species with no natural predator in the Everglades ecosystem.

“The non-native Burmese python was likely introduced to Florida’s Everglades by accidental or intentional releases by pet owners. Once sought-after commodities, pythons have been sold by breeders as pets or showpieces to exotic animal collectors. Since making their way into the bountiful grounds of the Everglades, these giant constrictors have thrived, assuming a top position on the food web.”

These creatures are generally docile and are hunted for their uniquely patterned skin, according to
National Geographic. Although they have a notable presence in the Everglades, these big snakes are listed as “vulnerable” by the International Union for Conservation of Nature.

SFWMD said in a
press release that their Python Elimination Program pays qualified individuals to survey land for the pythons and to humanely euthanize each one they catch in the field (according to American Veterinary Medical Association guidelines) and then “deposit them at designated drop-off locations.”

Removing the species, as well as reducing the populations of other invasive plants and animals, will help preserve the rare Everglades ecosystem, the department said.

“Just six months after eliminating the first 1,000 pythons from District lands, this program is about to double that total because of a true team effort,” said SFWMD scientist Mike Kirkland, project manager for the Python Elimination Program. “With the Governing Board’s unwavering support, District staff and a dedicated group of hunters are working to help control this invasive species and protect native wildlife.”