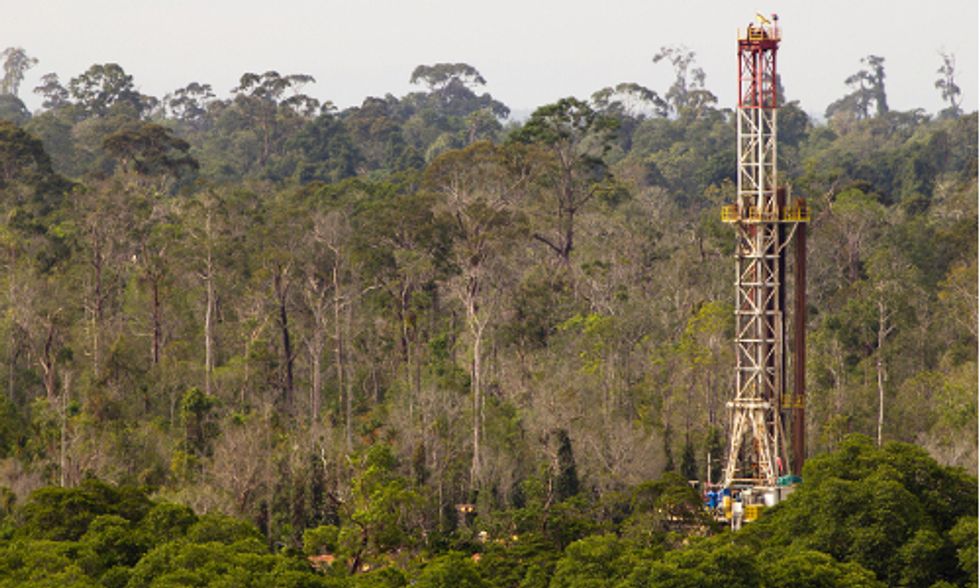 As fossil fuel interests hungrily eye public lands set aside for recreational use, tourism and natural, historical and cultural preservation, Wisconsin congressman Mark Pocan, with Illinois Congresswoman Jan Schakowsky, introduced a bill yesterday to ban fracking on publicly owned lands. It's the strongest bill introduced in Congress so far to take a stand against fracking.

A fracking operation isn't what most Americans want to encounter during a peaceful hike in the woods.
Photo credit: Shutterstock

“Federal lands should be preserved for the public good,” said Pocan. “There are serious safety concerns around fracking and it should not be allowed on our pristine public lands specifically set aside for conservation. As we learn more about fracking’s impact on the environment and people living near fracking wells, one thing is clear: the process can be harmful and the effects are not fully understood. We should not allow short-term economic gain to harm our environment and endanger workers.”

His comments reflect a battery of recent studies showing dangers of public health impacts from water and air pollution and public safety impacts from noise, traffic and earthquakes. That's on top of the ruined landscape and the leakage of methane, a greenhouse gas which drives climate change, as well as the carbon emissions resulting from burning the fracked oil and gas extracted from those wells. And the Government Accountability Office (GAO) found that the Bureau of Land Management (BLM) failed to inspect more than half of the so-called “high priority” wells, which required more attention to prevent water and environmental contamination.

“I share Representative Pocan’s serious concern about hydraulic fracturing, which has been shown to contaminate water sources, increase methane emissions and even to cause earthquakes," said Schakowsky. "We owe it to our children and grandchildren, and their children and grandchildren, to ensure the protection of public lands. This bill—in banning fracking on those lands—helps us follow through on that important promise.”

“The science is clear that to avoid the worst effects of climate change, the majority of the world’s fossil fuels have to stay in the ground," said Randi Spivak, public lands director with the Center for Biological Diversity. "There is no better place to start than with America’s public lands. The public owns the lands and owns the carbon."

Currently, 90 percent federally managed lands are available for oil and gas leasing, including fracking, with just 10 percent protected exclusively for conservation, recreation, wildlife and cultural heritage. Oil and gas companies already have leased over 36 million acres of public land and seeking to use another 12 million acres in national forests and land adjoining national parks. Last year the Bureau of Land Management (BLM) updated fracking regulations on public lands and the rules are now at the Office of Budget and Management (OBM), the final step before being adopted, which is expected to occur earlynext year. During the comment period, over a million comments were received, with more than 650,000 opposing fracking on public lands, as polls show that Americans are increasingly sour on it.

“The inherently dangerous nature of fracking means that no set of regulations can prevent accidents from happening that impact public health and natural resources,” said Food & Water Watch executive director Wenonah Hauter. “In light of the dismal track record that the oil and gas industry has on protecting the environment, the only way that public lands can be protected is by banning fracking. We applaud Congressman Mark Pocan for exhibiting leadership by standing up to protect our public lands for future generations to enjoy.”

The support for the new legislation came not just from environmental groups, but from those concerned with a wider range of economic and social justice issues, as well as health issues.

“We wholeheartedly support his legislation to protect public lands from exploitation, degradation and eventual destruction,"said Conor Boylan and Andrea Miller, co-executive directors of the Progressive Democrats of America. "We hope this courageous effort will culminate in strong protections, joining landmark environmental legislation like the Clean Air and Clean Water Acts."

“We commend Representative Pocan for introducing the Protect Our Public Lands Act,” said Karen Higgins, RN, co-president of National Nurses United. “Nurses understand the dangers to public health of pumping dangerous chemicals into our water supply. Fracking has been linked to miscarriages, infertility and birth defects. Congress should act immediately to ban fracking on federal lands.”

Unfortunately, the bill comes at a time when Republican control of Congress brings increased influence for fossil fuel companies who spent heavily to elect representatives friendly to their interests.