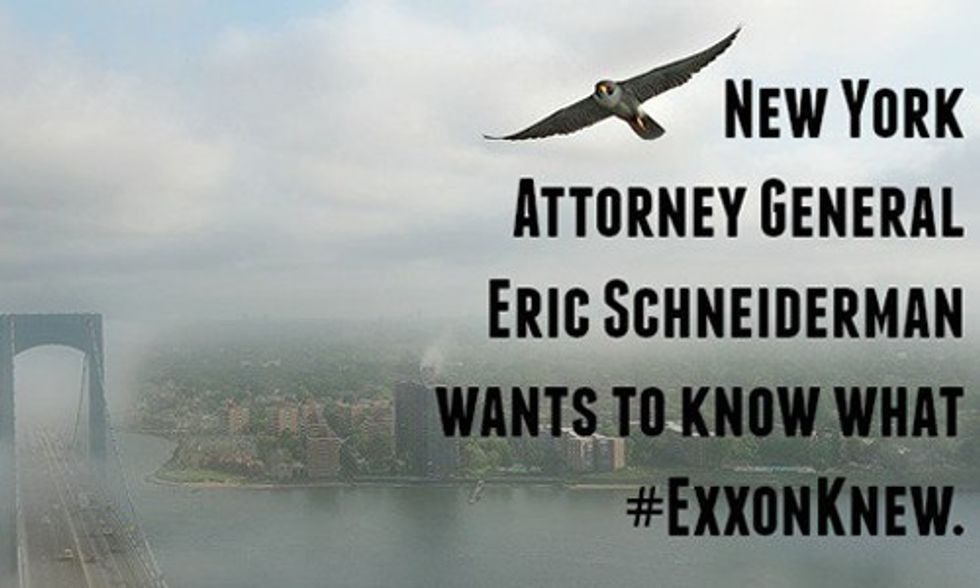 Seeking to find out exactly what Exxon knew and when the oil giant knew it, New York Attorney General Eric Schneiderman has issued the corporation an 18-page subpoena seeking four decades of documents, research findings and communications related to climate change, according to news reports on Thursday.

InsideClimate News, one of two outlets whose investigative reporting spurred the inquiry, said the subpoena delivered late Wednesday "seeks documents from Exxon ... related to its research into the causes and effects of climate change, to the integration of climate change findings into business decisions, to communications with the board of directors, and to marketing and advertising materials on climate change."

According to the New York Times, which broke the news of Schneiderman's probe on Thursday: "The focus includes the company’s activities dating to the late 1970s, including a period of at least a decade when Exxon Mobil funded groups that sought to undermine climate science. A major focus of the investigation is whether the company adequately warned investors about potential financial risks stemming from society’s need to limit fossil-fuel use."

Following the reporting by InsideClimate News and the LA Times, presidential candidates, elected officials, climate leaders and advocacy groups have all called for investigations into Exxon's corporate behavior.

"'Exxon Knew' just joined the category of truly serious scandals," said 350.org co-founder Bill McKibben on Thursday. "Just as New York’s Teddy Roosevelt took on the Standard Oil Trust a century ago, New York’s attorney general has shown great courage in holding to account arguably the richest and most powerful company on Earth. We hope that other state attorney generals and the federal Department of Justice and the Securities Exchange Commission will show similar fortitude."

Describing the subpoena development as "groundbreaking news," Greenpeace executive director Annie Leonard echoed McKibbens' call for other entities to follow suit. "The door is now open for the Department of Justice to initiate a federal investigation," she said, "as people have repeatedly called for on different fronts."

Now, at least, there's little chance of this issue going away. "I went to jail a few weeks ago because I was worried this great reporting from InsideClimate News and the LA Times might disappear," McKibben added, referring to his Oct. 15 act of civil disobedience at a Vermont gas station. "I'm not worried about that anymore."