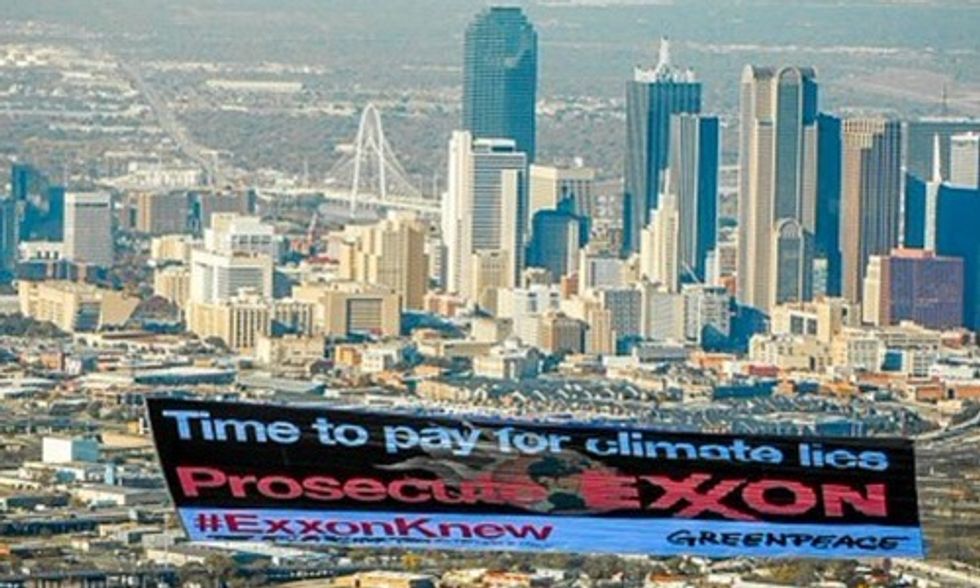 Blink and you'll miss it, but one line in a recent Washington Post interview on climate change with experts from fossil fuel giant ExxonMobil offhandedly suggests a nightmarish, desperate future if global leaders don't act fast—one that centers around a possible average temperature rise of up to 7 or more degrees Celsius.

"With no government action, Exxon experts told us during a visit to The Post last week, average temperatures are likely to rise by a catastrophic (my word, not theirs) 5 degrees Celsius, with rises of 6, 7 or even more quite possible," writes the Post's editorial page editor Fred Hiatt in a piece titled "Even ExxonMobil says climate change is real. So why won’t the GOP?"

Scientists have long warned that allowing a global temperature rise of 2C or higher would bring irreparable climate change and extreme weather events. Heads of state are assembled in Paris to negotiate a global climate agreement to limit global warming before the planet hits that threshold. Grassroots climate justice groups are calling for an even narrower target of 1.5C. But a contrarian sect of the Republican party has threatened to obstruct any environmental policies that come home from Paris—which could derail any progress made at the COP21 talks.

"Future historians—if there are any future historians—will almost surely say that the most important thing happening in the world during December 2015 was the climate talks in Paris. True, nothing agreed to in Paris will be enough, by itself, to solve the problem of global warming. But the talks could mark a turning point, the beginning of the kind of international action needed to avert catastrophe."

"Then again, they might not; we may be doomed. And if we are, you know who will be responsible: the Republican Party."

"We're looking at a party that has turned its back on science at a time when doing so puts the very future of civilization at risk," Krugman writes.

This political obstructionism throws up another challenge to the American COP21 contingent, which has already proven to be a contentious presence at preliminary negotiations earlier this year in Bonn, Germany, criticized by developing nations for its attempt to weasel out of financial obligations to frontline communities already struggling under the impacts of climate change.

But Krugman also points to an article published in August in Politics & Policy, a political science journal, that states, "The U.S. Republican Party is an anomaly in denying anthropogenic climate change."

That paints an uncertain future for any agreement that emerges from the negotiations. However, as The Nation's environmental correspondent Mark Hertsgaard wrote in a piece published Monday, renewed hope is stirring among the grassroots organizations operating from the sidelines in Paris.

"[T]he final agreement governments hope to sign by week’s end may urge limiting temperature rise to 1.5 degrees Celsius. This would represent a major shift from the current international goal of 2 degrees C as well as a historic—and surprising—victory for the world’s poor and most vulnerable nations. Their representatives, joined by climate justice activists, have long criticized the 2 degrees C goal as a virtual death sentence for millions of people already suffering from the sea level rise, harsher droughts and other impacts unleashed by the 1 degree C of temperature rise measured to date."

"Previously dismissed by most wealthy countries as economically unrealistic, the 1.5 degrees C target has re-emerged at the Paris summit due to a confluence of factors: increased recognition by many wealthy countries that even 2 degrees C will bring ruinous changes to food, water and other vital systems; a more unified diplomatic posture on the part of the 100-plus poor and highly vulnerable countries on record supporting a 1.5 degrees C target and relentless pressure from civil society."

French President Francois Hollande and German Environmental Ministry State Secretary Jochen Flasbarth both expressed their support for the 1.5C goal last week and, notably, acknowledged that it was environmental campaigning that brought the world to this moment.

"We cannot accept that the poorest countries, those with the lowest greenhouse gas emissions, are the most vulnerable," Hollande said. "It is therefore on behalf of climate justice that we must act."

Flasbarth confirmed that the 1.5C goal was Germany's official position and that the target "must be mentioned" in the final agreement.

"Thus the 1.5C goal has now been endorsed by the host nation of the summit as well as Europe's strongest economy," Hertsgaard writes.

The Guardian reported late Monday afternoon that the U.S., Canada, China and the European Union (EU)—the world's biggest polluters—were "open to" the 1.5C goal and "are working with other countries on some formulation that would include 1.5C," according to State Department Envoy Todd Stern. But that announcement received lukewarm reactions from environmental campaigners and delegates from larger, developing countries who said it was just another attempt by wealthy nations to pass off obligations of reducing emissions.

"Why not 1C, why 1.5C," said Ashok Lavasa, India's lead negotiator. "The moment we are talking about target we are also talking about carbon budgets. We need to look at the development space that is available and therefore those who are eager to maintain it below 2C should actually be working to maintain that carbon space so that they don’t compromise the needs of developing countries."

Erich Pica, director of the climate group Friends of the Earth, added, "The U.S. and European countries are adopting the idea of 1.5C as a mitigation target but they are blurring of the lines on what has to happen to have a just and fair sharing of the 1.5C equation."

Meanwhile, The Post editorial prompts another question in light of two groundbreaking investigations that recently exposed the oil giant's role in suppressing climate change science for decades: What else does Exxon know?