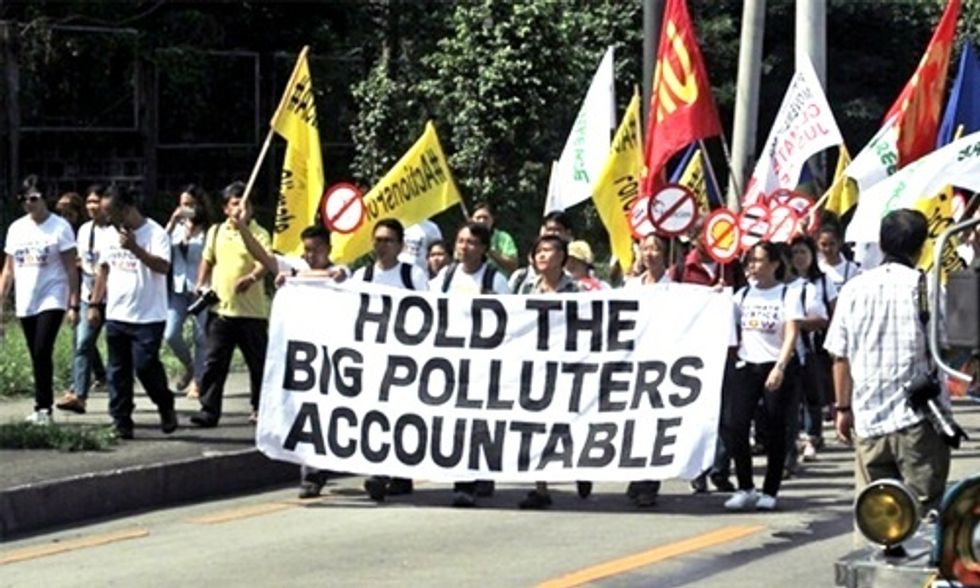 A few weeks ago the first ever human rights legal action seeking the accountability of the 50 big polluters was launched. Filed by Filipino typhoon survivors and several environmental organizations, it demands that the Philippines Human Rights Commission (CHR) investigate and acknowledge the complicity of 50 investor-owned fossil fuel companies in causing extreme weather events.

This comes from a consensus that the typhoons and catastrophic storms that annually batter the Philippines and many other small island nations, are exacerbated by climate change caused by the burning of fossil fuels by distant and faceless energy companies. People in the Philippines know that they are at the end of a terrible chain reaction that destroys homes, ruins health and takes lives and livelihoods. It violates their basic human rights, so they, like many others, are starting to seek climate justice.

People in the Philippines know that they are at the end of a terrible chain reaction that destroys homes, ruins health and takes lives and livelihoods. Photo credit: Vincent Go / Greenpeace

They are part of a growing number of people that will no longer stand for companies—despite knowledge of the harms associated with their products—continuing to engorge themselves on profit at the expense of the climate and human lives. These companies are morally bound to help communities at the frontline of climate change while financing a just transition to a 100 percent renewable energy future.

Cases of negligence, like the May 2014 Soma mine disaster in Turkey, which took the lives of 311 workers and injured 80 others and litigation by communities in Peru and Ecuador against Texaco/Chevron over claims of pollution are examples of people taking a stand against how fossil fuel companies do business. The Philippines' submission is a reflection of an understanding that fossil fuel companies are acting in violation of human rights in and of itself, no matter how carefully the company undertakes their activity. In short, we and many others are declaring: it's not the way you do business, it's the business itself.

This story of many fossil fuel companies is sewn together by incompetence, corruption and greed. It is a history of companies who relentlessly drive forward their business with an irresponsible outlook and lack of empathy for people and the planet. However, in the era of climate impacts and extreme weather events, the story is changing.

The top 50 investor-owned polluters under public scrutiny are taken from a list of 90 entities who, according to a report by Rick Heede, are responsible for 63 percent of the carbon dioxide and methane emitted between 1751 and 2010.

Coalitions of affected communities are developing jurisprudence that recognizes impacts of climate change as a breach of human rights. If successful, this recognition will lay the foundations for what is really required: attribution and action.

The petition was submitted on behalf of Greenpeace Southeast Asia, the Philippine Rural Reconstruction Movement and other local NGOs, with the support of the International Trade Union Confederation, Amnesty International, NGO legal experts and thousands of individuals. The broad coalition was put together because success in fighting climate change will only occur when organizations and individuals join hands across the globe to demand climate justice.

Climate impacts like extreme weather events hit the most vulnerable first; working people and the poor. With altered seasons and rising sea levels whole communities and nations are already suffering from corporate malfeasance. People are involved in every aspect of meeting this threat, from activists campaigning for action on climate to workers in new industries to workers in fossil fuel production.

While virtually all countries continue to depend on burning fossil fuels to drive economic growth, we know this must change rapidly and dramatically. Companies must commit to leaving at least 80 percent of the fossil fuels in the ground if we want to salvage any hope of maintaining a stable climate that allows humans and all other life to survive. Companies must engage in this transformation in full consultation with workers and communities to ensure the process is just.

We know that our sons and daughters will work in energy in the future, but they won't work in fossil fuels. We demand that the workers who have brought us the prosperity of today be treated justly and with due respect during the transition to a renewable energy future. We are aiming for a result whereby the Philippines CHR would acknowledge these historic responsibilities and begin framing pathways for the just transition required.

The final word on why we have taken this action is perhaps best described by Elma Reyes, a mother of two who had her livelihood destroyed by Typhoon Rammasun (known in the Philippines as Typhoon Glenda):

"They say it's going to be our way of life from now on, where typhoons will be more intense and affect our livelihood. If that's the case, I won't be able to provide for my family and feed my children. I won't give up and allow big companies to continue to ruin the environment and fuel climate change."

We encourage the Commission for Human Rights to commit to investigating the big polluters for their human rights violations as a matter of urgency.