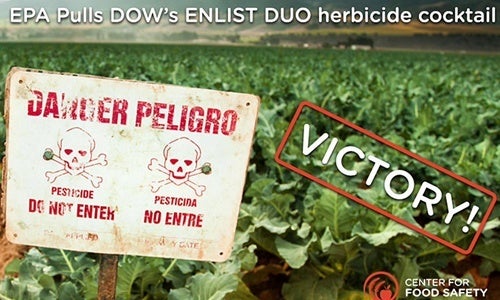 In a stunning reversal, the U.S. Environmental Protection Agency (EPA) has retreated from its earlier decision to let Dow AgroSciences market a new weed killer, branded Enlist Duo, which the company designed to kill hardy weeds on fields of genetically engineered (GMO) corn and soybeans. The agency said the product could pose potentially significant environmental risks, according to court documents filed Tuesday.

“This sudden reversal shows that the EPA’s review and assessment of the Dow AgroSciences product was deeply flawed and incomplete,” said Mary Ellen Kustin, senior policy analyst for Environmental Working Group. “The EPA now has a second chance to step back and rethink the consequences of allowing Enlist Duo on the market. In our view, this chemical ‘solution’ would only keep farmers tethered to a chemical treadmill.”

In October 2014, EPA approved Dow AgroSciences’ request to market Enlist Duo, a mix of the herbicides glyphosate and 2, 4-D, in six states. In March 2015, EPA lengthened the list to 15 states. The company developed this new combination to fight so-called “superweeds” that have evolved to survive blasts of glyphosate, marketed as Monsanto’s Roundup, widely used on GMO corn and soybeans.

But Tuesday, responding to a lawsuit filed by a coalition of environmental groups, including Environmental Working Group, the EPA lawyers told the U.S. Court of Appeals for the 9th Circuit that Dow AgroSciences had withheld data showing that the chemical mix has “synergistic effects,” meaning that the combination of pesticides intensifies the toxicity of the product to plants and possibly other living things

Lawyers for the U.S. Justice Department, representing the EPA, asked the Ninth Circuit court, which is hearing the environmentalists’ lawsuit, to vacate the agency’s approval (technically, “registration”) for Dow AgroSciences’ Enlist Duo.

The Justice Department brief filed yesterday advised the court that “EPA has learned that it did not have all relevant information at the time it made its registration decision. Specifically, Dow did not submit to EPA during the registration process the extensive information relating to potential synergism.”

The World Health Organization has categorized Monsanto’s glyphosate as a probable human carcinogen and 2,4-D as possibly carcinogenic to humans. The defoliant 2,4-D has been linked to Parkinson’s disease and non-Hodgkin lymphoma.

Despite growing evidence that it is harmful to human health, glyphosate use has exploded in the U.S. driven primarily by the widespread adoption of GMO crops. If Dow AgroSciences is allowed to sell Enlist Duo, many GMO crop fields may doused with both glyphosate and 2,4-D.

Environmental Working Group analyses have found that more than 11,000 churches and 3,200 elementary schools sit near fields planted primarily with GMO corn and soybeans.