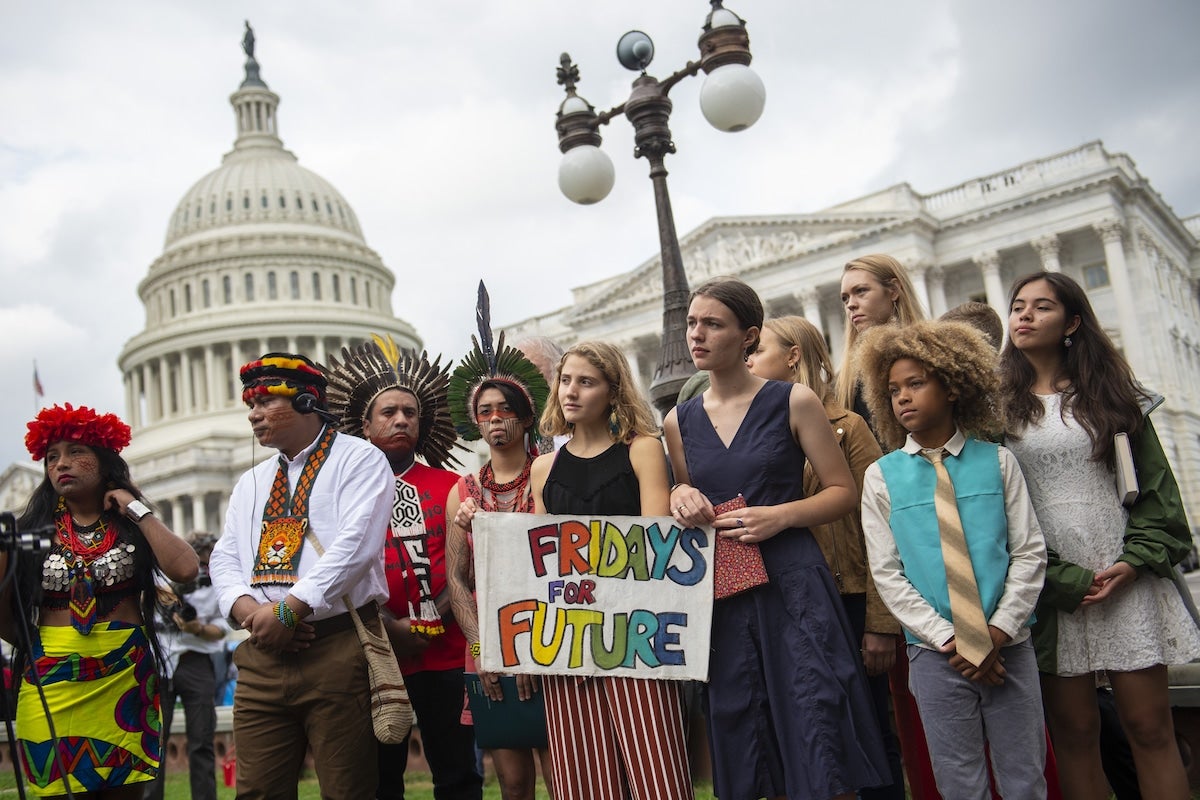 A boy gives an impromptu speech about him not wanting to die in the next 10 years during the protest on July 15. The Scottish wing of the Extinction Rebellion environmental group of Scotland locked down Glasgow's Trongate for 12 hours in protest of climate change. Stewart Kirby / SOPA Images / LightRocket / Getty Images

It’s important to remember that one person can make a difference. Around the world from teenagers to world-renowned scientists, individuals are inspiring positive shifts toward addressing the climate crisis. Maybe you won’t become a hard-core activist, but this list of people below can inspire simple ways to kickstart better habits. Here are seven people advocating for a better planet.

Molecular biophysicist Gail Bradbrook is the co-founder of Extinction Rebellion (XR). She’s been referred to as the “Godmother” of this international environmental movement “that uses non-violent civil disobedience to achieve radical change in order to minimize the risk of human extinction and ecological collapse.” Bradbrook first co-founded the group Rising Up!, which then progressed and became XR.

For more insight into what Bradbrook’s all about, check out these articles below:

Swedish climate activist Greta Thunberg has inspired an entire generation of kids to participate in her “Fridays for Future” protest movement. Greta and her movement were honored with an Amnesty International award for their “unique leadership and courage in standing up for human rights.”

Thunberg’s speeches are collected in her book No One Is Too Small to Make a Difference. She has said that she hopes the book causes panic. “I want you to panic… I want you to act as if our house is on fire. Because it is.”

Naomi Klein is an award-winning journalist, activist and author. Since publishing her New York Times bestseller This Changes Everything: Capitalism vs. the Climate, Klein has become a strong force in the environmental movement.

Klein’s book On Fire: The (Burning) Case for a Green New Deal is advertised as an expansive, far-ranging exploration that “captures the urgency of the climate crisis, as well as the energy of a rising political movement demanding change now.”

Bill McKibben is an author, environmentalist and activist. He is the founder of 350.org. In 1989 he published the first book on climate change, The End of Nature, written for the average person to understand the looming crisis. No climate activist list would ever be complete without acknowledging McKibben’s consistent dedication to our planet.

Xiuhtezcatl Martinez is an Indigenous environmental activist, musician and youth director of Earth Guardians. He told Rolling Stone, “I’ve been protesting since before I could walk.”

He’s also one of the plaintiffs on the youth climate lawsuit Juliana v. United States. In 2015, Martinez and 21 other youths filed a lawsuit against the U.S. federal government. For more on the trial, follow EcoWatch including this article that discusses this lawsuit.

Martinez wrote an op-ed in Teen Vogue in April that explains the power of young voices. “Young people and marginalized communities are reclaiming our power and our voices in the movements that are shaping our future. From Standing Rock to Flint, from the Bayou to DC, we’re beginning to see a different face of environmental leadership,” he said.

Bea Johnson fits a year’s worth of trash into a jar. Yes, just one little pint-sized mason jar! She is a pioneer of the zero-waste movement. Refinery29 featured her in an article titled Marie Kondo Came For Your Stuff; Bea Johnson Is Coming For Your Garbage.

Johnson’s blog, Zero Waste Home, and her book by the same name have inspired an entire movement devoted to a minimalist lifestyle. She believes that a zero-waste lifestyle is not only good for the planet, but also for our personal health. The book garnered international interest and has been translated into 26 languages. Johnson was interviewed by Here and Now’s Peter O’Dowd.