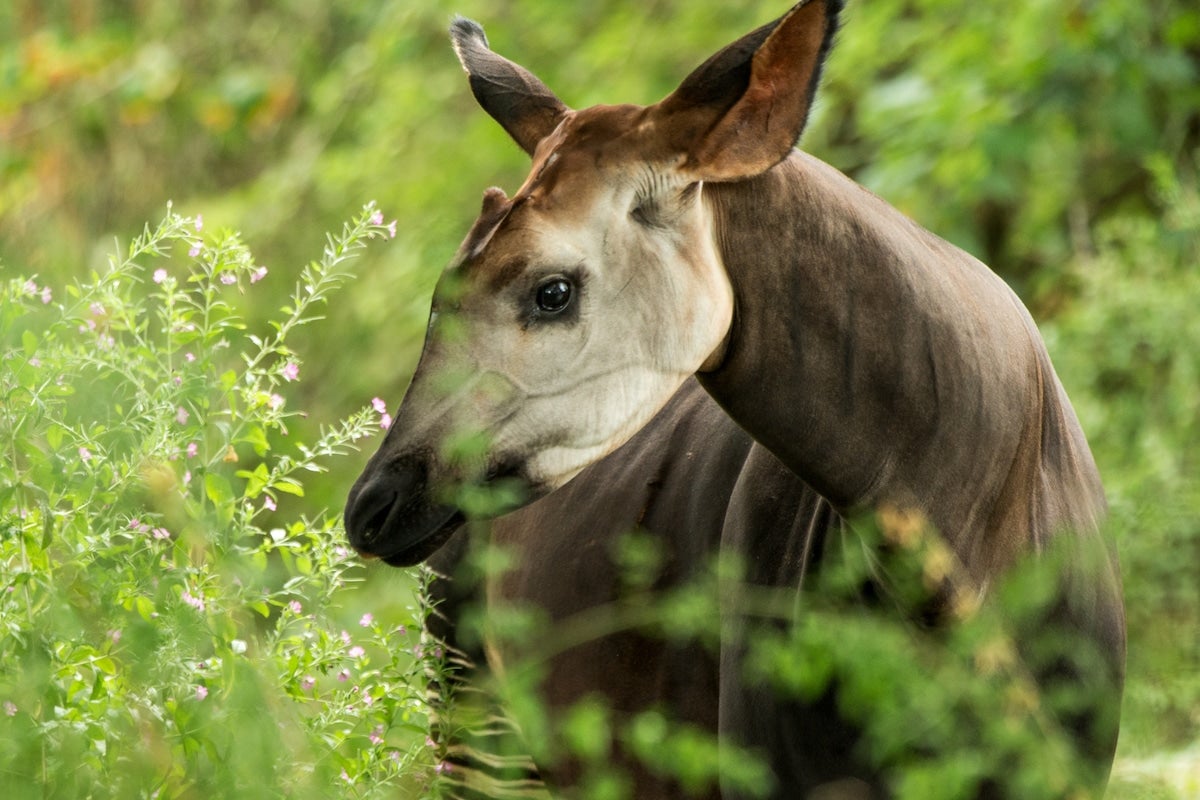 An endangered okapi in the Congo. Jiri Hrebicek / iStock / Getty Images Plus

The Okapi Wildlife Reserve, located in the Democratic Republic of the Congo, is an UNESCO World Heritage Site and home to one-sixth of the remaining wild okapi in the world. It protects many other wildlife species as well as one-fifth of the Ituri forest. But despite its status as a haven for conservation, the reserve is under threat from human activities.

Mining, deforestation, and poaching are all threatening the reserve, and criminals have murdered several people, including forest guards, since 2012.

Forest loss is expanding rapidly. In 2020, the most deforestation in the Okapi Wildlife Reserve since records began in 2002 was recorded via satellite data. Since 2002, the area has lost about 7% of its total forest cover.

Most recently, satellite data from Planet Labs shows deforestation along the Ituri River in late 2021, likely from illegal gold mining.

“Mines draw in desperate people, depend on bush meat to feed the miners and are subject to extortion by rogue militias and the military,” John Lukas, co-founder of the Okapi Conservation Project, told Mongabay in 2019. “Secondly, clearing of forest by immigrants is an increasing threat along with logging in certain areas.”

In addition to the habitat loss, gold mining is detrimental to the environment in many ways. Miners use mercury to extract gold ore, and the mercury often leaches into water sources. From there, it impacts the aquatic life and moves all the way up the food chain, as explained by Mongabay.

The Okapi Wildlife Reserve is the habitat for 101 documented mammals, including the okapi, known as the forest giraffe, and 376 bird species. There are 17 species of primates, 14 species of forest ungulates and a large population of forest elephants in the protected area.

Protecting the reserve is important for the vulnerable okapi and other wildlife that call the region home, but preserving the area’s forests is also important in combating climate change.

“The forests of DRC, more than forests in the Amazon and in Asia, store carbon even in times of drought and rising temperatures,” Lukas said in a news release. “Preserving the forests of Eastern DRC not only provides habitat for okapi, elephants and chimpanzees but gives humans time to adjust our source of energy to be more sustainable and carbon neutral. Hopefully the Western world will financially support the countries of the Congo basin to value their immense forests as sources of life and not just another commodity to be sold.”