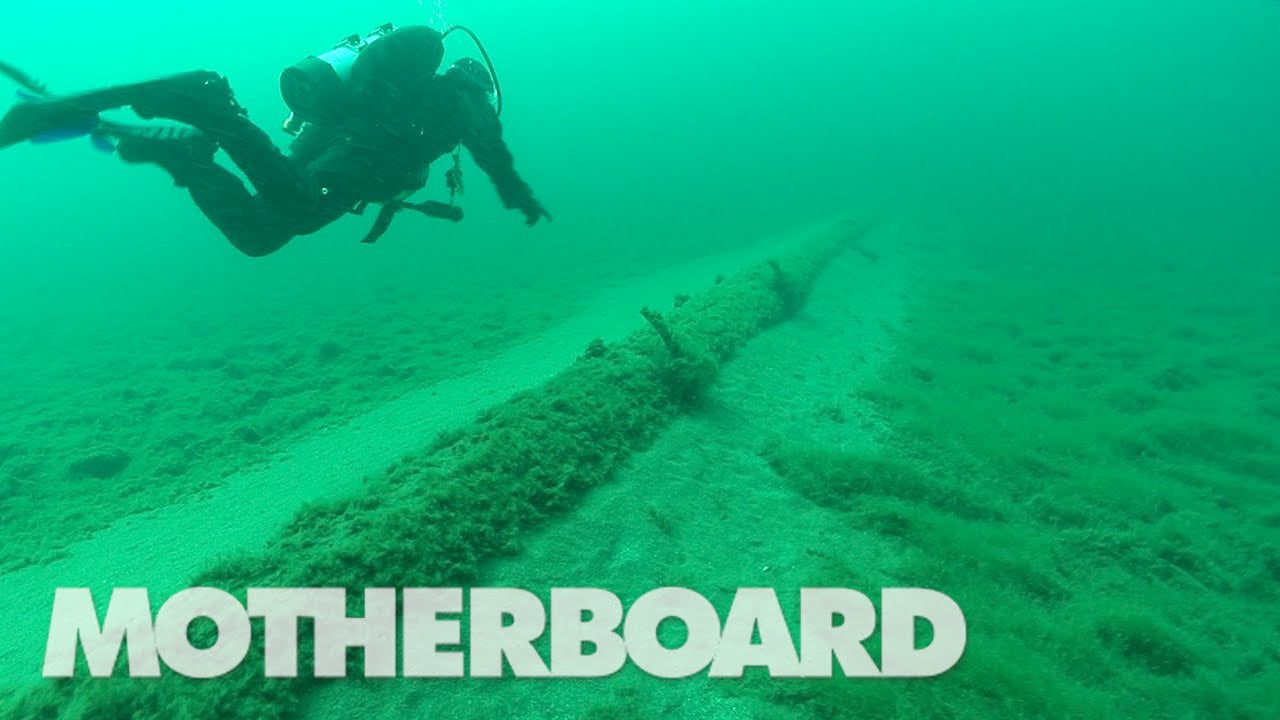 At dawn, I launch my kayak and paddle into a velvety expanse of turquoise water. Here, in northern Michigan’s Straits of Mackinac, Great Lakes Michigan and Huron meet like the middle of an hourglass. To the east, the rounded form of Mackinac Island is the centerpiece of an archipelago in Lake Huron.

According to an Ojibwe creation story, this is Mishee Makinakong, the Great Turtle, whose surfacing shell became a refuge for plants and animals as floodwaters surged in the days before time. Today, droves of ferries buzz to and from the island, a bustling summer tourist destination replete with kitschy fudge shops and horse-drawn carriages.

I’m paddling south, dwarfed by the Mackinac Bridge, a monolithic five-mile-long ribbon of green steel and gray concrete that connects Michigan’s upper and lower peninsulas. Lake Michigan sprawls westward. Its watery horizon shows the telltale dance of rising winds just as a wave splashes over my deck, reminding me to put away my camera. This isn’t a place to multitask.

Currents deflect my course as I approach a towering bridge support. It’s like paddling on the ocean, with steep waves and a strengthening tidelike flow. I angle my bow to compensate. Whitewater reflects from the concrete pillar, and eddies swirl in its wake. Even on this sunny June morning, the conditions hint at a destructive violence that makes me nervous.

Almost directly beneath my kayak runs Enbridge Line 5, twin 64-year-old pipelines at the bottom of the lakebed. Line 5 transports 23 million gallons of oil and natural gas liquids daily for 645 miles through Wisconsin and Michigan to Canada. Enbridge, the Canadian oil transportation giant, operated Line 5 inconspicuously until 2010; that’s when its sister pipeline, Line 6B, ruptured, pouring a million gallons of tar sands bitumen into the Kalamazoo River near Marshall, Michigan. It was the largest land-based oil spill in U.S. history. Suddenly, the peril posed by vintage infrastructure carrying petrochemicals through the heart of North America’s greatest supply of freshwater loomed very large.

University of Michigan hydrologist Dave Schwab has concluded that the Straits of Mackinac is “the worst possible place for an oil spill in the Great Lakes.” At any given time, one million gallons of petroleum products are contained in the 20-inch pipes that run along the lakebed. If one ruptured, oil would disperse with the currents that slosh back and forth through the straits. In Schwab’s worst-case scenario, 720 miles of lakeshore would be devastated.

The U.S. Environmental Protection Agency predicts that in the event of a spill, no more than 40 percent of the oil could be recovered by deploying booms and “in-situ burning”—lighting surface slicks on fire, a technique used in the 2010 Deepwater Horizon disaster in the Gulf of Mexico. The success rate would plummet in the winter, when the Straits of Mackinac are sheathed in feet of ice. This apocalyptic vision was enough to convince more than 60 municipalities and all 12 of Michigan’s Native American tribes that Line 5 should be decommissioned. Even Republican state attorney general Bill Schuette called for a timeline to shut down the pipeline.

“We know that Line 5 will ultimately be decommissioned,” said David Holtz, the Sierra Club’s Michigan Chapter chair and the coordinator of Oil and Water Don’t Mix, a grassroots coalition of pipeline opponents with 30,000 supporters. “The only question is, will it be decommissioned before or after it ruptures?”

Line 5 is a product of the post–World War II construction boom, when oil companies installed pipelines across the country to fuel an increasingly global economy. “Michigan was the shortest path to get oil to market,” Holtz explained. “We get all the risk; Enbridge gets the reward.”

For Enbridge’s part, spokesperson Michael Barnes said that Line 5 is “vital to the people of Michigan, who need energy to heat their homes and power their industries.” (Holtz contends that the company has never documented this claim.) In the five years following the Marshall disaster, Barnes said, the company spent nearly $5 billion on maintenance, inspection, and leak detection: “This is the largest, most comprehensive and sophisticated maintenance and inspection program of any pipeline system in the world.”

As for the underwater pipelines at the Straits of Mackinac, Barnes said, “Recent inspection reports show that Line 5, from an engineering and integrity perspective, is like new and in excellent condition.”

Retired Dow chemical engineer Ed Timm has taken it upon himself to debunk such rosy claims. Timm, a resident of nearby Harbor Springs whose dark ponytail and youthful swagger belie his 72 years, started studying the pipeline and checking out Enbridge’s claims out of curiosity. He dug up early construction journals documenting the hasty process whereby pipelines were “pulled,” as the engineers called it, across the straits. He plotted modern imagery alongside original blueprints to show how lakebed sediments have shifted drastically over time, placing stress on sections of pipe. And he tabulated modern-water-current data to prove that the Straits of Mackinac are capable of producing double the 2.25-mile-per-hour currents envisioned by the original plans.

Timm also discovered a 2016 technical report that he calls a “smoking gun.” The operating-easement agreement for Line 5 between Enbridge and the state of Michigan mandates that there be no unsupported spans longer than 75 feet. According to engineer Mario Salvadori, who reviewed the design, “The pipe must not be allowed to span a valley of more than 140 feet.” But the 2016 report, conducted by the Ohio-based engineering firm Kiefner and Associates, mentions unsupported spans of up to 286 feet, indicating that over time the pipeline has shifted from its moorings. Timm showed me a graph of how the pipeline’s resiliency diminishes across increasing lengths of unsupported spans. Just like a bent paper clip, he said, a pipeline with inadequate support will become fatigued as it flexes back and forth in moving water. “At that distance a steel pipeline basically turns into a noodle.”

For Native Americans in the Great Lakes region, Line 5 touches a cultural nerve. The area a spill might affect coincides with tribal fishing areas and encompasses the watery heart of the indigenous creation story.

On Lake Michigan’s east shore, the Grand Traverse Band operates a couple dozen boats, whose captains and crews make their livelihoods fishing year-round, said Desmond Berry, the band’s natural resources manager. Fish is a staple of the indigenous diet and is recognized in the tribe’s traditional clan system. “We are a fish nation,” Berry said.

The Grand Traverse Band is one of five Chippewa and Ottawa tribes with commercial operations in the Mackinac Straits area. They harvest more than three million pounds of whitefish and lake trout annually. Commercial and recreational fishing on the Great Lakes contribute $2.5 billion to Michigan’s economy, with tourists spending $660 million annually in the counties straddling the Straits of Mackinac, supporting 7,500 local jobs. “If there were a spill,” Berry said, referring to the slogan on the state’s license plate, “‘Pure Michigan’ would cease to exist.”

Safeguarding freshwater was at the core of efforts to stop the Dakota Access Pipeline at Standing Rock and is also at the root of Native American opposition to Line 5. Little Traverse Bay Bands member Jannan Cornstalk takes her responsibility as a water protector seriously. “Women have the ability to bring life into the world through our bodies,” she said. “An embryo is held in a sack of water inside of us. That’s our connection to the water.”

Cornstalk was shocked when she learned about the sunken pipelines at Mackinac Straits. Since 2015, she’s organized Labor Day demonstrations to coincide with a popular Mackinac Bridge walk, which includes canoe and kayak flotillas and, this year, an arts and culture festival. “I believe our water is in crisis,” she said, pointing to the contaminated drinking water in Flint, which led to a federal state of emergency in 2016. “Clean water is a basic human right. Without it we are nothing.”

The water calms and my mind wanders as I paddle back to shore. After the flood in the Ojibwe creation story, Sky Woman, the mother of humanity, settled on the Great Turtle’s back and summoned the animals to help rebuild the earth. One at a time, the strongest swimmers—Beaver, Fisher, Marten, and Loon—plunged into the water, diving deep in search of soil. Each returned to the surface empty-handed and ashamed.

Then diminutive Muskrat volunteered. The other animals snickered, but Muskrat dove in anyway and stayed underwater an exceedingly long time. “The Muskrat floated to the surface more dead than alive, but he clutched in his paws a small morsel of soil,” recounted the late Ojibwe historian Basil Johnston. “Where the great had failed, the small succeeded.”

Sky Woman spread the modicum of soil on the turtle’s back and infused the new world with the breath of life. Turtle Island grew, teeming with grasses, flowers and trees. Finally, Sky Woman gave birth to the first Anishnabeg—the people—whom she instructed to live in harmony with all of creation, living and yet unborn.

The Mackinac area exerts an energy that pulls at the conscience of indigenous people and newcomers alike. A 2016 poll revealed that nearly two-thirds of Michigan voters do not support oil pipelines in the Great Lakes. Holtz hopes the state government will soon have a moment of reckoning like he did five years ago, when he represented the Sierra Club in an initial meeting to discuss Line 5 with other environmentalists. Holtz had recently retired from a career in media and “wasn’t looking for a fight.” Then he spent an autumn weekend alone at the straits. “I drove across the bridge and looked over the water,” he recalled. “I decided I didn’t want to be responsible for not stopping an oil spill in a beautiful, wonderful place that I love. I don’t want that to be my legacy.”