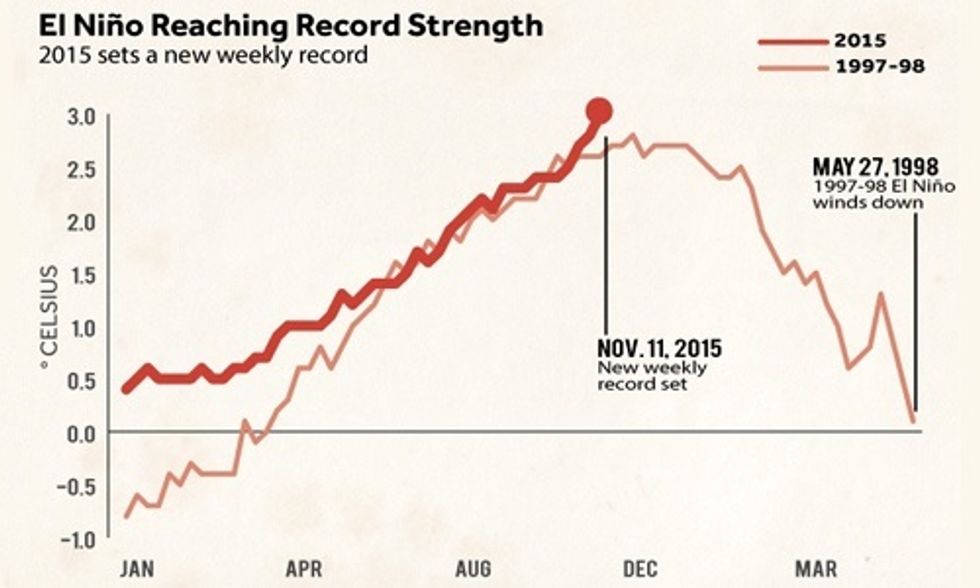 A "mature and strong" El Niño event, which is contributing to extreme weather around the globe, is expected to be one of the strongest on record, the World Meteorological Organization (WMO) announced Monday.

"Peak three-month average surface water temperatures in the east-central tropical Pacific Ocean will exceed two degrees Celsius above normal," said the WMO, making this El Niño one of the top three strongest in the last half century.

It's still too early to tell exactly where this El Niño will rank because the weather phenomenon typically peaks late in the calendar year with maximum strength between October and January of the next year. And they often stretch into the next year before "decaying."

“Severe droughts and devastating flooding being experienced throughout the tropics and sub-tropical zones bear the hallmarks of this El Niño, which is the strongest for more than 15 years,” WMO Secretary-General Michel Jarraud said.

Jarraud said that the agency is more prepared than ever before, as officials warn countries to brace for El Niño's impacts on sectors like agriculture, fisheries, water and health.

Despite increased awareness and preparedness, the WMO remains concerned about dealing with El Niño's impacts because climate change is only exacerbating it.

“Our scientific understanding of El Niño has increased greatly in recent years. However, this event is playing out in uncharted territory. Our planet has altered dramatically because of climate change—the general trend towards a warmer global ocean, the loss of Arctic sea ice and of over a million square kilometers of summer snow cover in the northern hemisphere.

“So this naturally occurring El Niño event and human induced climate change may interact and modify each other in ways which we have never before experienced. Even before the onset of El Niño, global average surface temperatures had reached new records. El Niño is turning up the heat even further."

Still, Jarraud cautioned that it isn’t clear if climate change is causing a record El Niño. “We cannot establish a link at this stage between climate change and the occurrence of El Nino," he told Climate Home. "What I have said is that we are in uncharted territory because some impacts are interacting with the impacts of climate change.”

Jarraud released the update on the eve of an international scientific conference in New York, co-sponsored by the WMO, which seeks to better understand El Niño and its impacts and increase affected countries' abilities to adapt. At a press conference Monday, Jarraud linked the record-breaking Pacific hurricane season and peat fires in Indonesia—which released the equivalent of Brazil's annual emissions in just three weeks—to El Niño. The WMO Secretary-General said to expect hotter and more frequent heat waves, more flooding and more of the most severe storms.

The WMO also blamed El Niño for the ongoing major coral bleaching event, which may become the worst global coral die off in history, as well as droughts in Southeast Asia, Australia and parts of Africa, and flooding in South America.

At least by one measure, this El Niño hit a new record, though. Data from the National Oceanic and Atmospheric Administration revealed that "the region of the Pacific generally used to gauge El Niño’s strength has officially surpassed the 1997-98 super El Niño in terms of warmth," reports Climate Central.

The region where the measurement was taken—the Niño 3.4 region—hit a new weekly record of 5.4 degrees Fahrenheit (three degrees Celsius) above normal. That surpasses the previous weekly record of five degrees Fahrenheit (2.8 degrees Celsius) set by the 1997-98 event. "It remains to be seen if this is the peak and if so, how long it lasts," said Climate Central.

By at least one measure, this is the strongest El Niño on record. Photo credit: Climate Central

Climate Central offered a fair warning, though, for anyone ready to clock this year as number one:

While everybody loves a good record, it’s worth keeping any debate about the strongest El Niño on record in perspective. The Niño 3.4 region is an important one to monitor in terms of global impacts, but it’s only one of a handful of regions scientists monitor to assess El Niño’s strength and characteristics. Areas off the coast of Peru and the far eastern Pacific were warmer during the 1997-98 El Niño. It also remains to be seen if this year’s event will set an all-time monthly or seasonal record, which would bolster its case for strongest, biggest or whatever-ist on record.

For a better understanding of El Niño, watch this video from the WMO: