Effects of Climate Change on the Spread of West Nile Virus 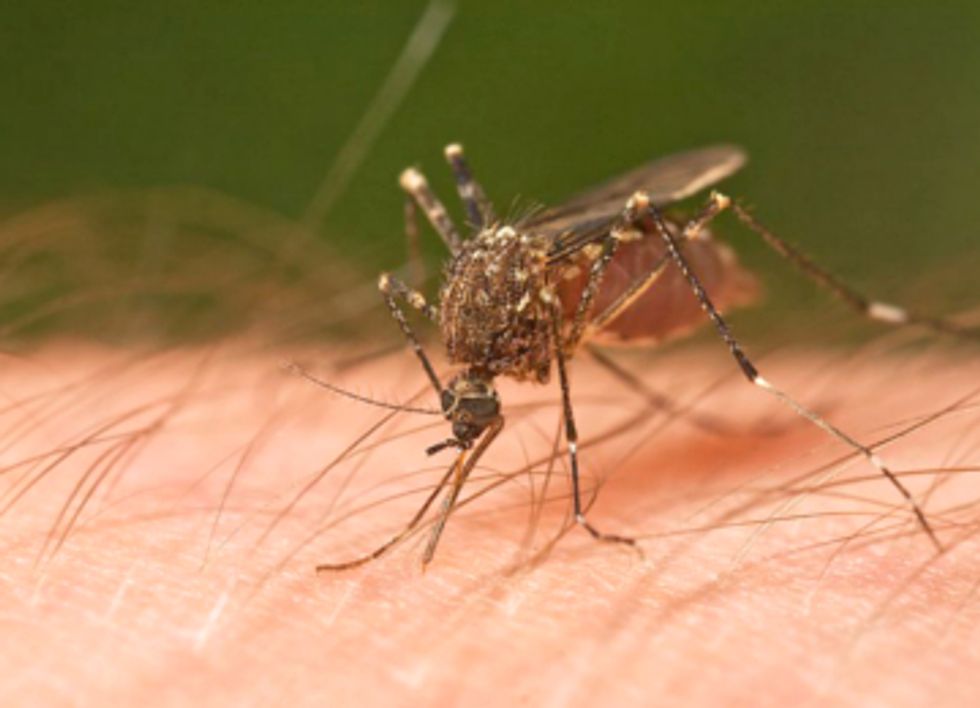 The varied influence of climate change on temperature and precipitation may have an equally wide-ranging effect on the spread of West Nile virus, suggesting that public health efforts to control the virus will need to take a local rather than global perspective, according to a study published this week in the scientific journal Proceedings of the National Academy of Sciences.

Known as a vector for the West Nile virus, this Culex quinquefasciatus mosquito has landed on a human finger. Photo credit: CDC/Jim Gathany

University of Arizona researchers Cory Morin and Andrew Comrie developed a climate-driven mosquito population model to simulate the abundance across the southern U.S. of one type of mosquito known to carry and spread West Nile virus to humans. They found that, under the future climate conditions predicted by climate change models, many locations will see a lengthening of the mosquito season but shrinking summer mosquito populations due to hotter and dryer conditions allowing fewer larvae to survive.

However, these changes vary significantly depending on temperature and precipitation. For example, drops in summer mosquito populations are expected to be significant in the South, but not further north where there will still be enough rain to maintain summer breeding habitats and extreme temperatures are less common. These findings suggest that disease transmission studies and programs designed to control populations of disease-carrying mosquitoes must be targeted locally to maximize their effectiveness, the authors argue.

"It used to be an open question whether climate change is going to make disease-carrying mosquitoes more abundant, and the answer is it will depend on the time and the location," said Morin, who did the study as part of his doctoral dissertation in the lab of Comrie. Morin is now a postdoctoral researcher on Comrie's team.

"One assumption was that with rising temperatures, mosquitoes would thrive across the board," Morin said. "Our study shows this is unlikely. Rather, the effects of climate change are different depending on the region and because of that, the response of West Nile virus transmitting mosquito populations will be different as well."

"The mosquito species we study is subtropical, and at warmer temperatures the larvae develop faster," Morin explained. "However, there is a limit—if temperatures climb over that limit, mortality increases. Temperature, precipitation or both can limit the populations, depending on local conditions."

In the southwestern U.S. for example, hotter and drier summers are expected to delay the onset of mosquito season; however, late summer and fall rains are expected to result in a longer season. Conversely, the south-central U.S. will see fewer mosquito days due to less rain during summer and early fall. Higher temperatures projected for the shoulder seasons—spring and fall—will likely make for a longer mosquito season across much of the U.S., except in the Southwest during spring where severe drying inhibits population development.

Morin pointed out that while the study focused on one important part in West Nile virus' infectious cycle—mosquitoes of the species Culex quinquefasciatus—there are other mosquito species that transmit the virus. Furthermore, the virus also infects birds, another part in the cycle that was not included in the model simulations.

A so-called container breeder, Culex quinquefasciatus lays its eggs in small volumes of standing water. The larvae therefore depend heavily on precipitation, unlike species that prefer larger bodies of water such as lakes.

According to the Centers for Disease Control (CDC), 70 to 80 percent of people infected with West Nile virus do not develop symptoms. The remaining 20 percent will have flu-like symptoms for a week or two, while severe effects are limited to less than one percent of infected individuals. They include encephalitis (inflammation of the brain) or meningitis (inflammation of the lining of the brain and spinal cord) and mostly affect the elderly and individuals with compromised immune response.

First detected in North America in 1999, West Nile virus has since spread across the continental U.S. and Canada. Cases of humans infected with West Nile virus have been documented in every state in the contiguous U.S. The areas of major epidemics vary from year to year. The largest most recent outbreak occurred in Texas in 2012, with 1,868 disease cases reported to the CDC.

"'Which locations are likely to experience epidemics in the future?'—those are the kinds of questions studies like ours may help prepare for," said Morin. "We don't model the actual virus, we only look at the vector, but our study informs at least one part of the ecology of the virus. It is unique in projecting the impacts of climate change on a West Nile vector."

Morin said the study could help managers and decision makers better anticipate how mosquito populations will respond to changes in climate and prepare accordingly.

"For example, if projected precipitation and temperature changes for a given area are indicating a longer mosquito season, public health officials can plan to adapt to that possibility through abatement and awareness campaigns."