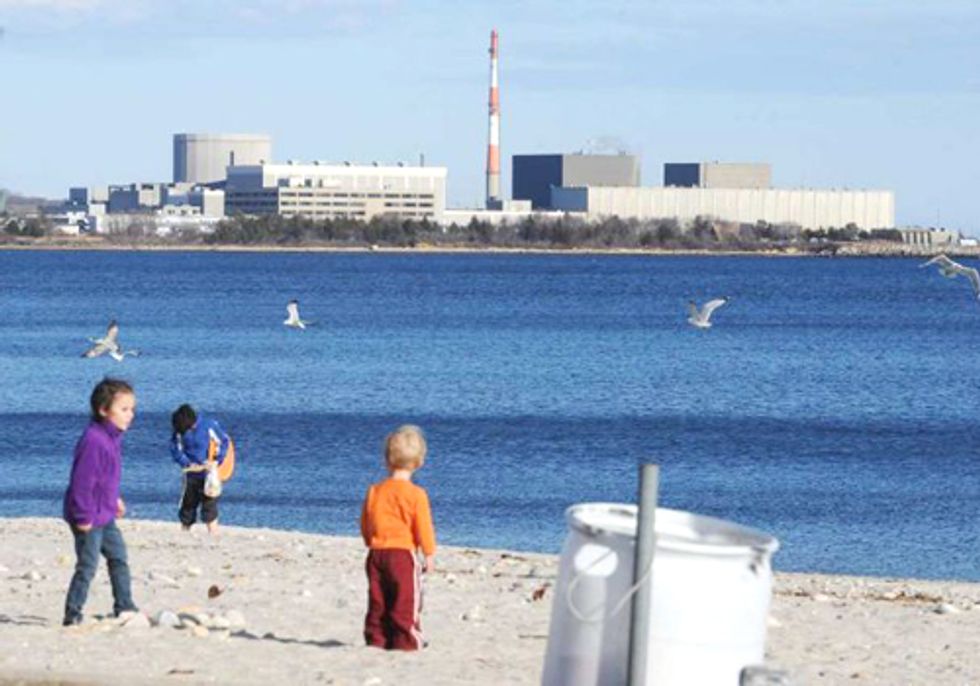 On Aug. 12, Unit 2 of the Millstone Nuclear Power Station in Connecticut—which provides half of Connecticut’s power and 12 percent of New England’s—was shut down because the seawater used to cool the plant was too warm.

For the last few months EcoWatch has been covering what's become the worst drought in the U.S. in more than half a century. More than 3,200 daily high temperature records were set or tied in June, and July is in the books as the warmest month ever recorded in the lower 48 states, according to a report issued by the National Oceanic and Atmospheric Administration's National Climatic Data Center.

Besides the discomfort of relentless heat and unmitigated sunshine, the drought has forced us to rethink several issues commonly taken for granted—namely, abundant and affordable food, secure livelihoods for farmers, safety from natural disasters, practical public policy regarding the delegation of crops for food and biofuels, and most importantly, the value of water.

The value of water is inestimable. Without it, as the drought has shown us, uncertainty and chaos quickly enter the picture, throwing superpower economies off kilter and quite literally, imperiling lives.

But that's not all.

The drought of 2012 has more to teach us about the value of water as it lurches on, including the issues surrounding water as an integral component of conventional energy generation.

The undisputed champion of the current U.S. energy debate is hydraulic fracturing or fracking. As conventional oil and gas resources become more difficult to come by, energy companies now have to dig deeper than ever to unearth the rich deposits of fossil fuels still available. In order to fracture shale formations that often exist thousands of feet below the surface, drillers use anywhere from 1 to 8 million gallons of water per frack. A well may be fracked up to 18 times. The water, usually drawn from natural resources such as lakes and rivers, is unrecoverable once it's blasted into the earth, and out of the water cycle for good.

Even if there wasn't a problem with water contamination, deforestation, and noise and air pollution from fracking, the pro-drilling agenda would still be hit hard with an insurmountable roadblock—access to abundant water.

On June 28, the Susquehanna River Basin Commission suspended 37 separately approved water withdrawals for fracking due to localized streamflow levels dropping throughout the Susquehanna Basin in Pennsylvania and New York.

In Kansas, oil and gas drillers are running out of options due to the tenth driest July on record. Companies with dwindling access to water resources are resorting to paying farmers for what water they have left, or more, drilling their own water wells, digging ponds next to streams or trucking in water from places as far way as Pennsylvania, according to CNN Money.

Jeff Gordon, the CEO of Texas Coastal Energy Co. said, "That can cripple a drilling company, as lack of water can basically suspend operations."

Fracking isn't the only dirty energy industry that relies on water for its operations. On Aug. 12, Unit 2 of the Millstone Nuclear Power Station in Connecticut—which provides half of Connecticut's power and 12 percent of New England's—was shut down because the seawater used to cool the plant was too warm, according to the Hartford Courant.

In its 37-year history of operation, Unit 2 of the Millstone Power Station has never shut down due to excessively warm water. The power station, which draws its water from Long Island Sound, must cool its reactors with water no warmer than 75 degrees F, but following the hottest July on record, the water has been averaging 1.7 degrees F above the limit, according to the Hartford Courant.

According to a River Network report in June, electricity production by coal, nuclear and natural gas power plants is the fastest-growing use of freshwater in the U.S., accounting for more than half of all fresh, surface water withdrawals from rivers. This is more than any other economic sector, including agriculture, and occurs in an era when all other use sectors are reducing water withdrawals.

According to the report, more than a quarter of the water withdrawn by fossil-fuel power plants to cool their generators goes up in steam—the remainder carries pollutants and excess heat into rivers and waterways, causing fish kills and algae blooms.

Put in perspective, for every gallon of water used in an average household, five times more water (40,000 gallons each month) is used to provide that home with electricity via hydropower turbines and fossil fuel power plants.

Creating a sustainable relationship with the world's freshwater resources is the most vital environmental issue facing us today. While scientists continue to work on creative uses of wastewater to stretch our resources farther—such as substitution, regeneration and reduction—a prevailing shift in attitude that values water over profits will ultimately be required to ensure the world's population will have access to safe drinking water.