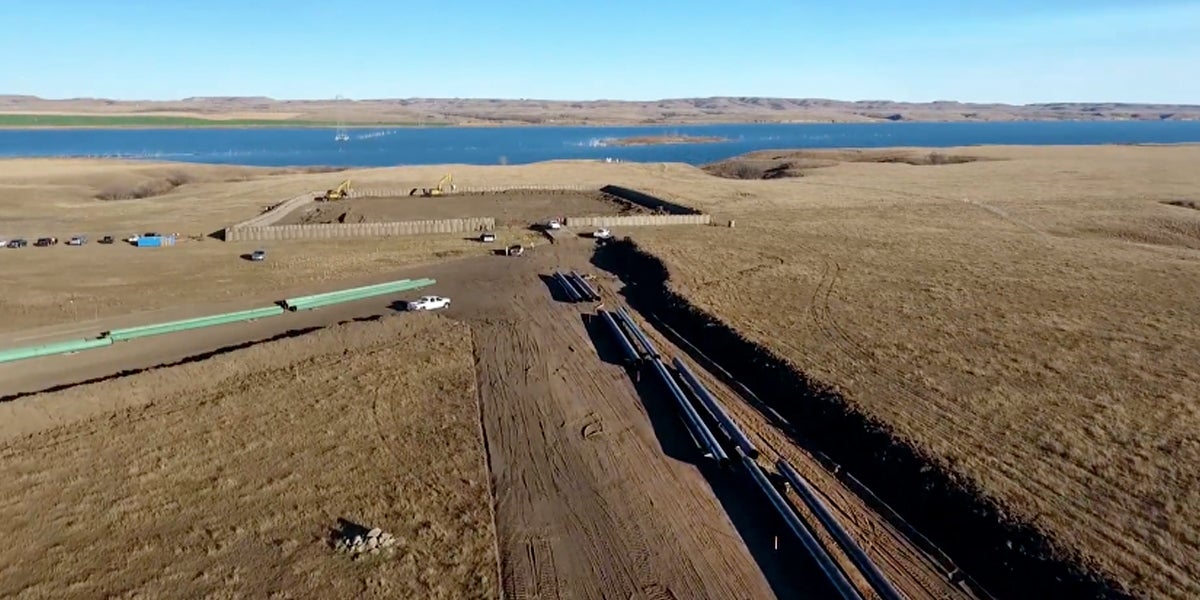 The U.S. Army Corps of Engineers has confirmed to DeSmog that Energy Transfer Partners, the owner of the proposed Dakota Access Pipeline, has ignored the Obama administration’s Sept. 9 request to voluntarily halt construction in a disputed area, 20 miles east and west of Lake Oahe and the Missouri River.

The confirmation came in the aftermath of a video published by drone pilot Shiyé Bidziil on the news website Indian Country Today. The video was featured on Nov. 2 and offers an airborne view of pipeline construction—coupled with heavily guarded concrete fortresses around key construction locales—in close proximity to the Missouri River.

“The Army will not authorize constructing the Dakota Access Pipeline on Corps land bordering or under Lake Oahe until it can determine whether it will need to reconsider any of its previous decisions regarding the Lake Oahe site under the National Environmental Policy Act (NEPA) or other federal laws,” reads the initial Sept. 9 statement disseminated by the U.S. Department of Justice, U.S. Department of Interior and Army Corps.

“Therefore, construction of the pipeline on Army Corps land bordering or under Lake Oahe will not go forward at this time. In the interim, we request that the pipeline company voluntarily pause all construction activity within 20 miles east or west of Lake Oahe.”

After showing the video to Curry Graham, director of public affairs for the Army Corps, Graham confirmed to DeSmog that Energy Transfer Partners has proceeded with construction inside of the administration’s requested zone. Graham also said construction has halted just short of the federal property bordering Lake Oahe.

“After the DC courts ruled in favor of the federal government, federal agencies asked the Dakota Access pipeline company to voluntarily pause all construction activity within 20 miles east or west of Lake Oahe,” Graham told DeSmog. “The key word is ‘voluntary,’ and the company chose to proceed with construction. As to why they did this, you will have to contact Energy Transfer Partners to ask that question.”

Which DeSmog did. Energy Transfer Partners spokesperson Vicki Granado responded, “We are constructing along the four-state route in accordance with applicable laws, and in areas where we have the necessary local, state, and federal permits and approvals,” Granado told DeSmog.

On Oct. 31, President Obama said the Army Corps is considering a reroute of the Dakota Access pipeline in this area and will let federal agency regulatory processes “play out” in the next several weeks. It remains unclear how the pipeline could be rerouted if construction is already occurring up to the Missouri River and Lake Oahe.

Drone videographer Bidziil secured the footage after the U.S. Federal Aviation Administration (FAA) lifted the Temporary Flight Restriction (TFR), which was supposed to be in place from Oct. 26 through Nov. 5, but ended after coming under public criticism.*

The no-fly zone was initially put in place because protestors at the Standing Rock encampment in North Dakota had allegedly fired arrows at a law enforcement helicopter and used their own drone to scan the area which was shot down by law enforcement. Donnell Hushka, the Public Information Officer for Morton County, North Dakota, did not respond to a request for comment about whether the Morton County Sheriff’s Department or another law enforcement agency had issued an incident report pertaining to the alleged incident involving arrows.

In 2014, another restricted flight zone was also put in place in Ferguson, Missouri, in the wake of protests erupting after the shooting of Michael Brown by law enforcement. The Associated Press obtained audio documentation demonstrating that the FAA had issued the restriction, in that case, in the attempt to shoe away airborne media.

Lee Rowland, an attorney for the American Civil Liberties Union’s (ACLU) Speech, Privacy & Technology Project, pointed to the Ferguson example as a reason to be wary of initial explanations for the necessity of such temporary no-fly zones.

“Because the FAA now has a history of being caught on tape implementing a no-fly zone for the specific purpose of censoring media flights, I’m not sure they’re entitled to an assumption of good faith that this no-fly zone had been put in place for valid reasons,” Rowland told DeSmog.

Explaining how he felt about the footage his drone captured, Bidziil expressed a sense of consternation.

“Everybody’s mad. Everyone feels hurt. Everyone feels broken, but we can’t let them break us,” he told Indian Country Today. “We just have to stand here and do what we can.”

“To think Energy Transfer Partners would respect a voluntary request to be decent, even one by the President of the United States, was wishful thinking. If the Obama administration really wants to pause construction, as the President suggested he does, it needs to continue to suspend ETP’s permits to build under the Missouri River,” said Molina.

“This debacle also shows the need to make the Army Corps of Engineers’ permitting process much more transparent, with a full environmental review and thorough, participatory tribal consultation.”

The Obama administration currently is conducting formal, government-to-government consultations with Native American tribes across the U.S. in order to obtain tribal input on how federal decisions are made about major infrastructure projects. The final consultation is set for November 21 via teleconference, with four more sessions slated between now and then, including the November 17 consultation in Rapid City, a few hours drive from Standing Rock.

'I Have Never Seen Anything Like This' via @EcoWatch https://t.co/QXkVYOXl4O pic.twitter.com/HYMmCA6w9W

*FAA’s website now shows the TFR back in place, starting back on the day we began working on this story on Nov. 4 and running through Nov. 15.