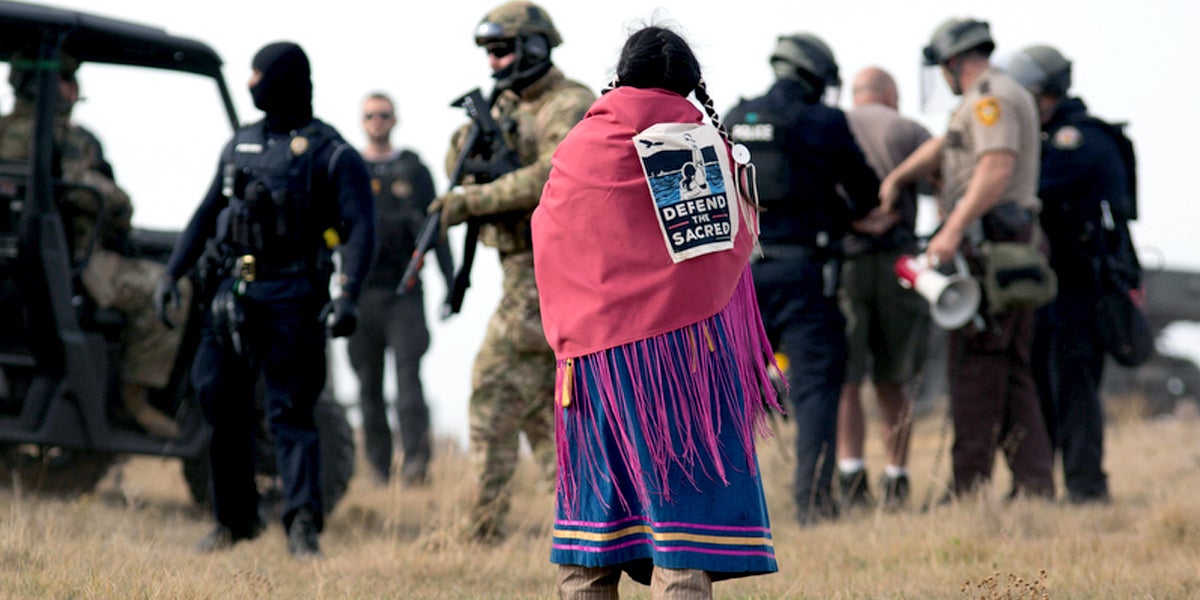 While President Obama said his administration is willing to let “things play out” for a few more weeks when it comes to the escalating effort by Native American tribes to stop a pipeline in North Dakota, Sen. Bernie Sanders (D-Vt.) offered a distinctly more urgent response on Tuesday by saying “Damn right” the project should be stopped immediately.

Though Sanders has made his opposition to the Dakota Access Pipeline known for months, he reiterated his opposition during a campaign rally on behalf of Hillary Clinton at Plymouth State University on Tuesday.

“Stop the Dakota pipeline!” someone yelled from the crowd during the speech, to which Sanders quickly responded: “Damn right.” He then added: “That is one of the issues, but there are many others.”

Sanders’ strong stance against the Dakota Access Pipeline—which has become a rallying point for native tribes and climate campaigners—is sharpening the contrast offered by other Democratic leaders—most notably Obama and Clinton.

Following escalating and violent tactics by police against pipeline opponents, who refer to themselves as “water protectors,” Obama told Now This News in a Tuesday interview that while there is an “obligation for authorities to show restraint” against those trying to block the construction, he was willing to let events “play out for several more weeks.”

With construction ongoing, however, tribal members have expressed serious concerns that in several more weeks the project would already be beyond the point of no return.

Obama did not say if or how he was willing to intervene further, but did indicate the Army Corps of Engineers, which controls easement rights where the pipeline would go beneath the Missouri River, is currently thinking about how the path could be “rerouted” in a way that would alleviate the concerns of the Standing Rock Sioux and other downstream residents.

“We’re monitoring this closely,” Obama said. “My view is that there is a way for us to accommodate sacred lands of Native Americans. And I think that right now the Army Corps is examining whether there are ways to reroute this pipeline.”

The issue that remains, he added, is “whether or not this can be resolved in a way that I think is properly attentive to the traditions of First Americans.” But when asked about the “shocking footage” showing abusive treatment of water protectors, Obama called it a “challenging situation” and said both sides have an obligation to refrain “from situations that might result in people getting hurt.”

In response to those remarks by the president, Xhopakelxhit, a Native American activist who has been at the Standing Rock camps for more than a month, told the Guardian she was disappointed Obama didn’t condemn the police tactics against peaceful protesters.

“Why has he not made a more forceful statement in favor of us? He’s basically trying to cover all his bases without actually doing anything,” she said. “It’s not surprising but it’s a coward’s way out.”

Offering a contrast to Obama’s position, Sanders articulated his reasons for outright opposition to the pipeline in an “impassioned” series of tweets earlier this week:

Over and over the government has broken its promise to respect Native American sovereign rights. Now it's time for real change. #NoDAPL

All over this country, Native Americans have suffered far too much, and for far too long. They deserve a voice. #NoDAPL

When we destroy nature, we are ultimately destroying the human beings of this planet. #NoDAPL

“From the beginning of this campaign, Secretary Clinton has been clear that she thinks all voices should be heard and all views considered in federal infrastructure projects,” read a statement released by her campaign. “Now, all of the parties involved—including the federal government, the pipeline company and contractors, the state of North Dakota and the tribes—need to find a path forward that serves the broadest public interest.”

In response, critics said characterized the response as a classic Clintonian “triangulation” and Bill McKibben, co-founder of 350.org, said it was a statement that “Literally says nothing. Literally.”