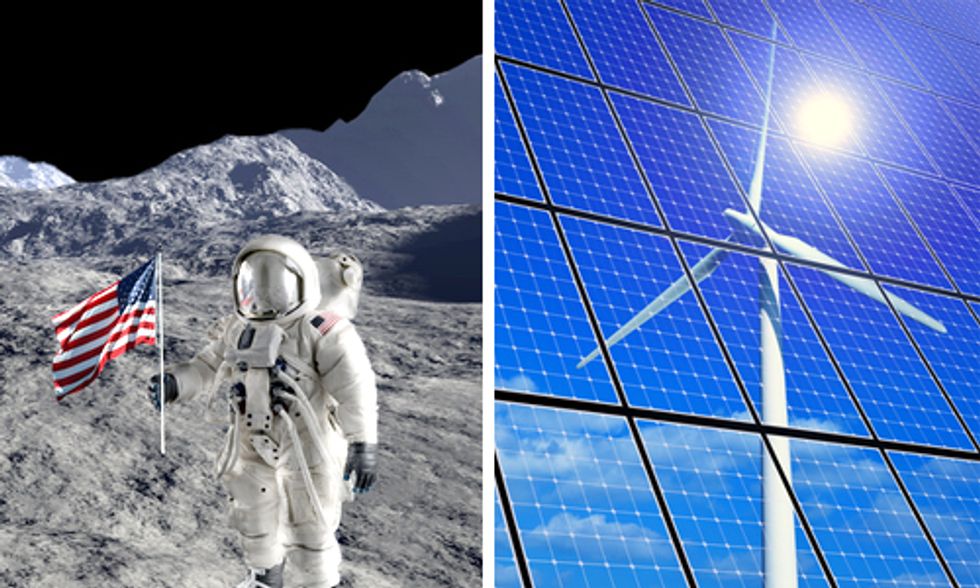 The U.S. has inspired and influenced millions of people around the world. I am one of them. America is the nation of big ideas like the New Deal, the Marshall Plan and the Fulbright Program. It has showed the world what is possible with vision, commitment and determination. Today, global warming and its impacts call for that kind of vision again.

Now, 60 years later, the U.S. still earns a disproportionate share of Nobel prizes, all because Americans and their leaders dreamed big to meet a challenge.

Almost 60 year ago, I received a generous scholarship and an elite education not possible at the time in my home country, Canada. On Oct. 4, 1957, as I began my senior year at Amherst College in Massachusetts, I was electrified by the Soviet launch of Sputnik. As the satellite passed overhead, its electronic beep reminded us how advanced Soviet technology had become.

In the months that followed, the U.S. sped up its response. America spared no amount of money and effort to blast ahead. Institutions, grants and scholarships were expanded. Even for foreigners like me, opportunities for graduate school, postdoctoral studies and faculty positions opened up. President John F. Kennedy's call for a race to the moon gave America a target.

Look at the results! The U.S. caught up to and overtook the Soviets, becoming the only nation to put astronauts on the moon. The spotlight on science stimulated innovation and led to advances that weren't predicted but are now taken for granted, from 24-hour television news and GPS to cellphones and computer technology. By providing the first pictures of Earth, the "blue marble," from space, the Space Race even inspired the environmental movement.

Now, 60 years later, the U.S. still earns a disproportionate share of Nobel prizes, all because Americans and their leaders dreamed big to meet a challenge. By investing in science and research, Americans made enormous strides, created jobs and spurred long-term economic benefits. Today, American science leads the world, expanding the frontiers of knowledge and providing fuel for ongoing revolutions in telecommunications, medicine and biotechnology.

But scientists do far more than expand technological and economic opportunities; they also increase our knowledge about our home, the biosphere—the air, water, land, photosynthesis and biodiversity—on which our survival and wellbeing depend. For decades, scientists have discovered unexpected consequences of exploding populations, technology, resource exploitation and waste disposal. They are society's sentinels, giving advance notice of unexpected problems or challenges.

Scientists discovered biomagnification, the phenomenon of concentrating molecules up the food chain as described by Rachel Carson's seminal book, Silent Spring. Physicists provided the insights to create atomic bombs and later discovered radioactive fallout, electromagnetic pulses and nuclear winter. Chemists synthesized chlorofluorocarbons that were ideal for aerosol spray cans and later learned of their unanticipated impact on the ozone layer.

More than 150 years ago, scientists discovered the heat-reflecting properties of molecules like carbon dioxide, water vapor and methane, and speculated on the role these greenhouse gases play in maintaining Earth's climate. Like a blanket holding warmth, these gases moderate nocturnal heat loss. In the right balance, they prevent huge daily temperature fluctuations, as occur on Mars, or extreme conditions, such as on cloud-shrouded Venus, where excessive water vapor keeps temperatures above 500 C.

For more than four decades, scientists have warned that human activity is spewing more greenhouse gases into the atmosphere than can be reabsorbed, so they are accumulating. The UN Intergovernmental Panel on Climate Change is the world's largest, most authoritative group of climate experts. Its latest report shows we're already experiencing ever-increasing impacts. If we act quickly, they say, we can better protect food and water supplies, critical infrastructure, security, health, economies and communities, and avoid the increased human displacement, migration and violent conflict that result from such tumultuous upsets. Meeting the challenge will also bring numerous economic benefits, as investing in innovative technology and renewable energy is a healthier long-term plan than relying on increasingly destructive, dwindling and difficult-to-obtain fossil fuels.

Faced with the magnitude and seriousness of global warming, and the tremendous opportunities in addressing it, we need the kind of leadership America is known for. We need an all-out effort as great as or greater than the determination to pull ahead of the Soviet Union in the Space Race.

America launched my science career, and I'm proud to receive the U.S. National Wildlife Federation's Award for Science in Washington later this month, along with President Bill Clinton, who is receiving the Conservation Award.

The America that set me on my path would never deny the reality of a scientifically proven problem, or claim nothing can be done about it or that meeting the challenge will destroy the economy. By committing to seek solutions, we will reap benefits—expected and unexpected. It's time to revive the American know-how and gung-ho enthusiasm that has long characterized this great nation.